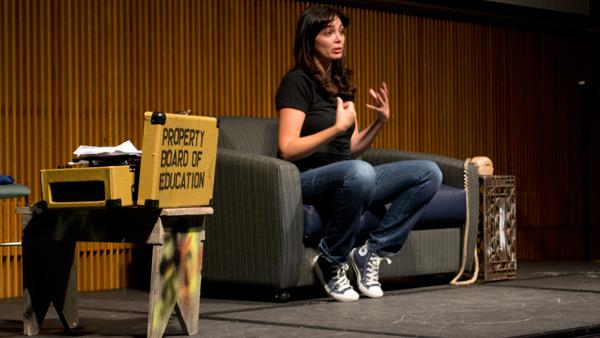 Setting the scene, actress Elaine Del Valle describes where she grew up: Drug addicts and homeless people line the streets of the Brooklyn, N.Y., neighborhood, a place so dangerous the UPS man must make his deliveries accompanied by a bodyguard.

This is Brownsville, an area that reported the highest murder rate in New York City in 2011 and saw a peak in crack and heroin addictions in the ’80s.

Del Valle brought her experiences living in Brownsville to Ithaca with her one-woman show, “Brownsville Bred,” Sept. 19. The play documents her childhood and teenage years as a Puerto Rican–American living in a crime-ridden and drug-ﬁlled neighborhood.

The show encompassed Del Valle’s life from 5 to 18 years old. She was the only actor on stage.

While many of the topics she discusses are serious, Del Valle juxtaposes the darkness with humor. Much of this lightheartedness, according to Del Valle, comes naturally to her, but it also comes from listening to and playing off of the audience.

“While I was writing the play, a lot of those things that I wrote about, I didn’t think were going to be funny, and it was the audience that told me that they were,” Del Valle said. “I just wrote the truth, and the truth was very often ﬁlled with so many colors.”

Melissa Cepeda, president of PODER, was shown a 20-minute preview of the play.

In the 13 years Del Valle acts out in the play, Cepeda said, she deals with issues such as drugs and personal identity. Christina Golding, community service chair and secretary for PODER, has not yet seen the play, but she recognizes the aspects of Del Valle’s life students may relate to.

“[Brownsville] is kind of a rough neighborhood, so she just talks about how she came out of that and how she had all these goals to basically get out of the hood and get out of Brownsville,” Golding said. “It’s very relatable, especially to Latino/Latina culture. She was from Brooklyn, a lot of people here are from Brooklyn and the city, so they can really relate to her upbringing.”

According to Del Valle, in a one-person show the audience is as much a part of the show as the actor. Del Valle listens to the audience to feel and hear what their emotions are and to give them what they need.

The play is a part of Latino Heritage Month, but Del Valle believes the themes she deals with can apply to someone of any background or race, especially because it is a coming-of-age story.

“When you’re a young person, a lot of the problems you might be encountering seem all-consuming at the time, and to see someone on stage telling a true story,” Del Valle said. “They can see the end of the issue and they can see that they can be successful.”

Golding said this play was selected for Latino/a Heritage Month because she believes that the college’s many different minority groups will be affected by it.

Del Valle hopes that all will ﬁnd a way to relate to her story, but ultimately she wishes to inspire students of color.

One of her most poignant shows, she said, was when she performed for a predominantly Hispanic high school, an audience she rarely sees.

“I kind of wanted to talk with them and say to them, you know, it’s your responsibility,” Del Valle said. “You represent Latinos, I represent Latinos. You’re seeing something real here, but now it’s your turn to be out there in the world.”