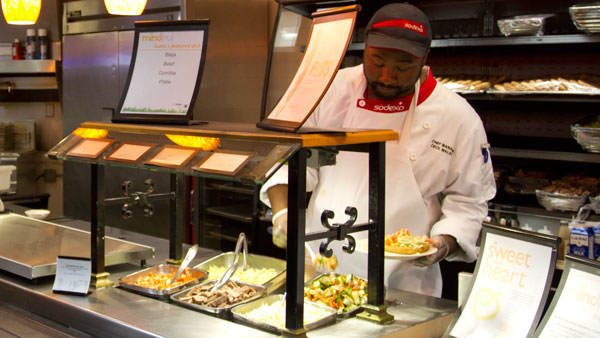 Blaire Janney/The Ithacan
Chef Cecil Malone cooks during a shift Sept. 11 at Mindful at the Campus Center Dining Hall. Mindful is a new station at the dining hall that serves food with fewer than 600 calories. The station is located in the front of the dining hall.
By Taylor Rescignano — Staff Writer
Published: September 18, 2013

Students flood into the Campus Center Dining Hall during the 5 p.m. dinner rush and find a new assortment of food in place of the old entrée station. They walk toward freshly plated dishes of lemon cod and mixed vegetables in front of them and realize the food they are looking at isn’t the usual meat-and-potatoes buffet they are used to seeing.

Mindful, a new option in the Campus Center Dining Hall, offers students healthy meals that are fewer than 600 calories. Some of the dishes include Mediterranean spinach and barley salad, flatbread pizzas and turkey bolognese with whole wheat spaghetti.

Jeff Scott, dining services general manager, said it’s hard to know exactly what the options are while eating in a dining hall, because unhealthy choices are more visible when students walk in.

“If you’ve been on campus a couple years, or if you are a savvy eater, you can eat healthy every day,” Scott said. “But sometimes it just doesn’t smack you in the face.”

“This approach, and the methodology of presenting [food] fresh and contemporary, is really hitting the mark,” Scott said. “We don’t want there to be this nagging barb that pokes you that says that ‘I really can’t eat healthy here at Ithaca.’”

The Sodexo website only lists 12 of the recipes that may be available at the Mindful station, but according to the Ithaca College Dining Services Sustainability blog, the station will use “low-fat cooking methods such as steaming, poaching and grilling food.”

Julia Lapp, associate professor in the Department of Health Promotion and Physical Education, said, at a glance, what she saw at Mindful appeals to her as a dietician.

“Looking at this makes me smile,” Lapp said while looking at a chicken Caesar salad dressed with black beans, corn, red peppers and a moderate amount of Caesar dressing. “It has protein, vegetables, carbs and looks like a complete meal.”

Rebecca Sexton, marketing manager of Dining Services, said it was important for the Campus Center Dining Hall, the most visited dining hall on campus, to cater to the increase in students’ healthy food requests.

“They want fresh food, local food, healthy food, and then we have the crowd that wants the comfort food,” Sexton said. “But I really think that the two parties can meet at that station. They know that it’s good for them, so they’ll be satisfied knowing that they won’t be hungry and also having something that they themselves have asked for.”

Since the station opened this semester, Executive Chef J.J. Molina said he has heard only positive feedback. He said, because the plates are perfectly portioned beforehand, students can take the plate without waiting in line for more food.

“We’ve heard a lot of good things during lunch time especially,” Molina said. “When it’s very busy, it’s so much easier when you can just take the plate and go.”

Sophomore Dominick Recckio agreed that having a pre-portioned plate makes his life easier when he comes in for lunch. He said he is not hungry after eating dishes from the Mindful station.

“It’s a good-size lunch portion,” he said. “One day they had a salad, but it wasn’t just a salad. It was a salad with chicken and some fruit on it. It was very wholesome.”

Senior Kyle Robertson disagreed, however. He said he wishes there were an option for larger portions.

“I understand why they are trying to go for smaller portion sizes, and I think it’s a good idea,” Robertson said. “Just for me, personally … I just don’t feel full afterward.”

Robertson said he almost always supplements his plate with french fries or other unhealthy options. Worried the unhealthier side dishes completely counteracts his healthy meal, Robertson said he does not receive any nutritional gain.

“If everything at that station was laid out in a buffet-style format like everything else is, I think it’d be a lot more beneficial to me, at least,” Robertson said. “Aside from that, I’d have to say that the few meals that I’ve had there are probably the best campus food that I’ve had during my four years at Ithaca College.”