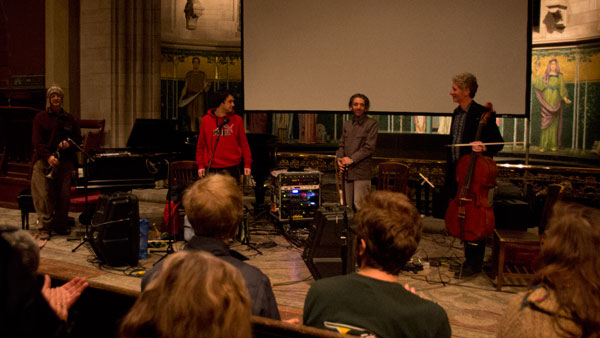 Courtesy of Kayla Reopelle
The Cloud Chamber Orchestra played along with a screening of "Grass: A Nation's Battle for Life," Jan. 28 at Sage Chapel
By Rachael Lewis-Krisky — Contributing Writer
Published: January 29, 2014

In the enchanting Sage Chapel at Cornell University, a packed house silences its cellphones, ready to experience the captivating combination of the Cloud Chamber Orchestra and the silent film, “Grass: A Nation’s Battle for Life.” The event, sponsored by the Finger Lakes Environmental Film Festival and Cornell Cinema, was mesmerizing as viewers traveled through musical and visual worlds.

The 1925 silent film, considered one of the oldest ethnographic documentaries, follows the Bakhtiari tribe of Persia as it treks across Arabia, escaping drought and starvation to find greener pastures in another land. A tribe of people 50,000 strong travels east through roaring rivers, steep cliffs and glacial mountains, dragging with them their possessions, including horses, cows, sheep, chickens, donkeys and dogs. This documentary presents an amazingly honest portrayal of a “foreign” group, compared to that of many other outsider-made documentaries that depict groups as uncivilized and dim. Instead, “Grass: A Nation’s Battle for Life” shows the strength of the tribe and the power of its determination.

Bringing this film and the Cloud Chamber Orchestra together is a stroke of genius. Its musical accompaniment is a perfect musical choice for the cavernous church space of Sage Chapel. The sophisticated musicians bring the idea of ambient soundscapes to a whole new level. With Robby Aceto on guitar and electronics, Chris White on cello and electronics and Peter Dodge on trumpet, piano, percussion and voice, Cloud Chamber Orchestra presents its out-of-this-world creations, effortlessly capturing the audience. Classic song structure does not hold the group back. They seamlessly move across complex layers of emotionally lingering timbres and exotically rhythmic percussion. As a special guest, Dodge’s son, Damian Dodge joined the trio on percussion.

With the raw sound of a steel slide guitar and the calm pitter-patter of a doumbek, an eastern and north African hand-drum, Cloud Chamber Orchestra slowly drifts into the opening scene of the film, which introduces our filmmakers and explorers: Merian C. Cooper, Ernest Schoedsack and Marguerite Harrison. A beautiful opening shot of blue sand, a pink sky and small figures of caravanning camels sets the stage for the quality of film to come. Though it may have been made on black and white 35mm film, it’s not without color. To manipulate the emotions of the viewers and capture the feeling of each locale, the filmmakers added color, from yellow painted desert scenes to the violet tint of dawn.

As the explorers’ adventure continues, the cello and trumpet carry the audience on a sensory journey that paralleled the erratic and ever-changing waves of the desert sand the explorers traversed throughout their journey. Upon their arrival to the home of the so-called “forgotten people” — the Bakhtiari tribe — the band pulls the audience into the home of this new culture through steel middle-eastern sounding rings and dings.

In the dramatic life or death scenes on the mountainous frozen tundra of Zardeh Kuh, the music rises and falls with ferocity, aided by a spacious piano and a deep electric guitar, mirroring the challenging struggle of the tribe. The chaotic leap of music comes to a calm as the people sprint down the icy mountain, with warmth and green grass in sight.

The journey was not only that of the Bakhtiari people, but also one for the audience, as this grand event was a visual and musical experience of artistic brilliance. The Cloud Chamber Orchestra will be performing again with silent cinema at FLEFF from March 31 to April 6.