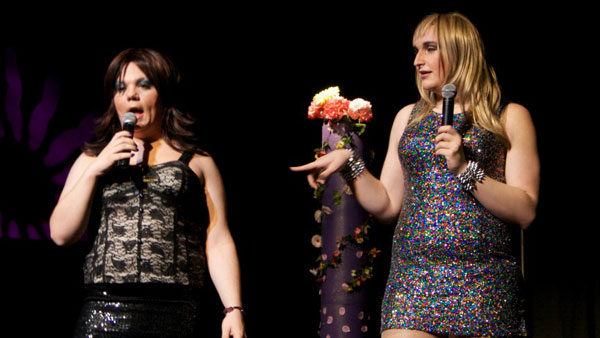 Em Fazeema, Rozaysha GaLore and Cat Von Doll are only a few of the many fabulous and glamorous drag queen characters who will be performing scenes in the movie-themed drag show coming to Ithaca College this weekend.

The third annual drag show will be held March 22 in Emerson Suites, organized by sophomore Daniel Fogarty and senior Benjamin Maust, president of PRISM, an LGBT group on campus. The drag show is the only event the group hosts in the spring semester because of the extensive year-long planning it requires.

“This year is definitely going to be our biggest yet,” Fogarty said. “We’ve definitely put in the most planning and a lot of extra preparation, and we’re expecting a lot more people than we have in the past.”

The theme “Lipsyncing for Life: Going to the Movies” features performers who incorporate songs, quotes or characters from movies into their acts.

“We wanted to pick a theme that was broad enough so people could do whatever they wanted and fit in their own unique style, but we also wanted it to be more succinct,” Fogarty said.

Fogarty said he hoped to see the drag community at the college grow into an opportunity for more people to express themselves.

“The drag community is kind of small,” Fogarty said. “We already knew a group of people who would do it, and a couple newer people reached out and expressed interest.”

Fifth year student Gabriella Carr said the drag show is an outlet that allows her to express herself in a different way. As a theater major, she is typically used to playing characters created by other people. Carr said she could create and become her own character in the drag show.

“For me, it’s all about embracing my womanhood — which is what all other drag queens are doing, too,” Carr said. “We’re embracing ourselves on a spectrum of masculinity and femininity regardless of our gender, and that’s something I really appreciate.”

The show is set up in a pageant-like form, where performers will come onto the runway one-by-one in front of the audience and lip-sync or sing and dance to their number. The show will include a variety of performances by several different participants, some performing at least two, three or even four routines as individuals or in groups.

There will be an array of different performances throughout the show. Sophomore Aaron Thornton described that his routines will be different than others.

“Some performers will walk around, lip-sync and move around a little, but it’s in the same standing-up position, whereas I’ll be doing flips and rolling on the ground,” Thornton said. “I give different levels in my performance.”

Thornton said he was looking forward to seeing the reaction from the crowd on the night of the show.

“It’s kind of like theater, but you get to interact with the audience and make them feel good and happy,” Thornton said. “It’s like brightening up somebody’s day. They’re paying to see a show, but you’re giving them extra.”

While Thornton’s performance will focus more around physical movement, Carr said her routine also brings something different to the stage: she’s performing as a faux-queen, which means she will perform as a woman instead of reversing gender roles.

“Usually when you see a woman entering a drag show you would expect them to be a drag king,” Carr said. “Instead, [faux-queening] is essentially women impersonating men being women. There’s an illusion aspect — is it a man, is it a woman? What exactly is happening here?”

Carr said the performers have been working on marketing and advertising the event to a wider audience than in previous years. Not only did she join as a performer, but she helped reach out to the community with new ways of broadcasting the event using promo videos, teasers and interviews to share how much work goes into the show.

“We want to outreach to people who would never see themselves at a drag show,” Carr said.

Fogarty said, unlike past years, everyone has put in more planning effort and collaboration into this year’s show. This year PRISM is collaborating with the hip-hop group Pulse, which is helping with choreography, as well as VIC Radio, which will provide the music for the show.

Audience participation is key for the show, as all the proceeds will go to support the Trevor Project, an LGBT organization that runs a suicide hotline and also provide outreach programs in schools. The audience can even tip performers by putting some cash into a hat onstage.

“It’ll be a night that’s a little outside the box,” Carr said. “This is definitely pushing the edges of what may be comfortable or uncomfortable, but it’s all done out of joy and self-empowerment, which is important to keep in mind.”