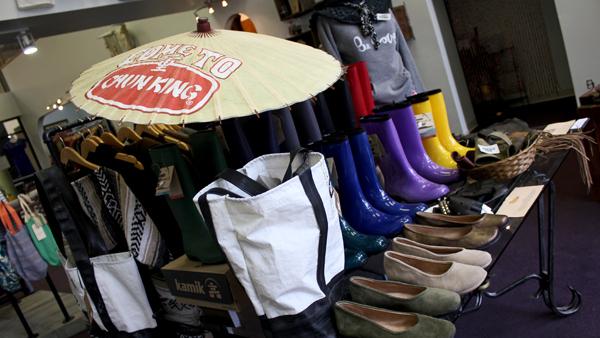 Scott Nolasco/The Ithacan
Rainboots, flats, tote bags and other eco-friendly merchandise are on display at The Art and Found, a new boutique in the Commons which won the space this summer in Downtown Ithaca Alliance’s Race for the Space contest.
By Jillian Kaplan — Staff Writer
Published: September 18, 2012

Independent, entrepreneurial spirit seeps its way through the fibers of hand-painted leather boots. The boots, high enough to swallow one’s leg, are just past the recycled rubber handbags. Scattered among racks are shapely, earth-toned dresses spun from local yarn.

The Art and Found, Ithaca’s new sustainable clothing store, is arranged like an art gallery. Co-founders Olivia Royale and Heidi Brown opened the doors to their new space in Center Ithaca during Labor Day weekend.

“Everything in here is sustainable,” Royale said. “So in one way or another it’s friendly to the earth. It’s either made using organic or recycled materials or it’s ethically produced. And most of it’s one-of-a-kind.”

The two artists won the space this summer in Downtown Ithaca Alliance’s Race for Space contest. The DIA awarded The Art and Found and Life’s so Sweet Chocolates — the latter opening in conjunction with Applefest — a year of free retail space on The Commons.

To Brown and Royale, the concepts of art, fashion and sustainability completely mesh together. Throughout the store they’ve posted artists’ biographies alongside products, creating a gallery-like feel to the shopping experience. Both Brown and Royale hope that by instilling a consciousness about where products come from and how they’re made, consumers will make general purchases with a sustainability mindset.

Gary Ferguson, executive director of the DIA, said Ithaca is the third community in the U.S. to try the idea of offering a year of free rent as a prize to retailers. He said the DIA got the idea after attending the International Downtown Association Annual Conference. He expressed great excitement about working with Brown and Royale.

“These are two very young entrepreneurs who are aggressive, and I think really talented,” Ferguson said. “These guys are getting very active right away in trying to work with getting their name out and doing things that will help the community, as well as help themselves.”

The store’s grand opening is Friday, with a fashion show at 5 p.m. Brown and Royale will have 15 to 20 looks coming out that represent the types of brands and styles they carry. By holding this event, Brown and Royale are looking forward to receiving input from the community.

Prior to opening The Art and Found, Brown and Royale were independent craftswomen, both working artists markets. They met about a year ago through a mutual friend. It was then they realized they both had the goal of opening a sustainability-oriented store. Though the artists are from New York, Brown lived in Brooklyn and Royale lived in California before settling into Ithaca about five years ago. They thought Ithaca embodied the spirit of both places.

“It’s very progressive here,” Royale said. “There’s a lot of artists and young people, so to just find a town that we felt would support our lifestyle, Ithaca really represents that.”

The Art and Found currently has about 20 vendors contributing items to the store, along with Brown and Royale’s own work. Some items are brands, while others are designers contributing individual projects. Many of the designers are local and make handmade products, which Royale said is great because customers can request something with a particular color or fit. Eventually, Brown and Royale may compile all their designers into an eco-friendly clothing line that could be launched internationally.

By carrying sustainable lingerie and beauty products, The Art and Found stands apart from other eco-friendly shops on The Commons. Brown and Royale are proud to say that everything in the store is not only hand picked and held to high standards, but conscious of the environment.

The Art and Found is also currently looking for designers, and Brown said they would love to feature work from interested college students.

“We definitely want to do a lot of outreach with the college students and really get them down onto The Commons and shopping around down here, and get them involved in the whole sustainability culture of Ithaca,” Brown said.

In the future, Brown and Royale want to expand by doing workshops and creating a flea-market vibe. They said they want to encourage people to learn a new trade and to give them the freedom to make art through whatever medium a person finds most inspiring.

“I used to go to the lost and found and find a lot of scrap and random things and make them into jewelry, and so I kind of started just dreaming up this concept,” Royale said. “When you’re lost and not feeling creative anymore, you go to The Art and Found and get inspired.”