Freshman performs classic-rock music for the college and Ithaca community 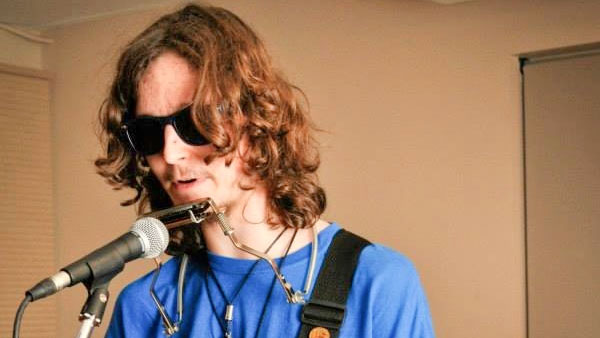 A slender man with long, brown hair sits in IC Square with a black electric guitar case and a tie-dye backpack. It looks like any other ordinary backpack that may be filled with books, but it actually holds a harmonica and a small amplifier.

Freshman Harrison Lindsay — or HAL, his stage name — is musician who plays guitar, harmonica and sings.

Lindsay said he has given 72 performances since he started performing in 2010 and has played 10 shows at the college so far. At the college, he has performed on Wednesday nights at the TC Lounge Open Mic Night; at “Just Be Cause,” an Ithacan Underground Open Mic Night; The Nines; and in IC Square in the Campus Center. In New Jersey, his home state, he has performed at The Washington Theater, a local restaurant called Anthony’s Pizza & Pasta and a nearby pub. He also plays shows in garages, basements and living rooms.

Lindsay said he began to perform and play music because music is a form of expression, and he loves performing because of the audience.

“I always wanted to be a rock star,” Lindsay said. “So I started out singing. I started doing solo songs and had a guy accompany me on guitar.”

At a typical gig, Lindsay plays with a silver harmonica holder and guitar strap wrapped around his neck. He stands in front of a microphone wearing a pair of his blocky, black sunglasses and an amplifier on his side.

He plays cover songs of his musical influences, including Bob Dylan, The Beatles, Nirvana, Eric Clapton and Jimi Hendrix, as well as original compositions.

“See The Eyes” is the first original song Lindsay composed, and he also performed it for the first time in April 2013 at The Studio at the Valley Music Center in Long Valley, N.J. He said he wrote this song in “bits and spurts,” composing the first half of the song’s lyrics and instrumentation scores in the spring of 2012, which was his junior year of high school. He said the song is about when he got into a disagreement with a friend and felt like no one was listening to him.

The song has bluesy guitar and harmonica melody with sad drawn-out vocals. The mood of the piece is somber and wistful with bereaved lyrics such as “What do you think when they blink/ Out a single tear of sorrow/ That drops into a sea/ Of madness/ And sadness/ With its waves splashing at our souls?”

Ben Caolan, Lindsay’s friend who attends Fairleigh Dickinson University and is guitarist of the Dirty Thirties, a New Jersey–based punk band, described Lindsay’s sound as folky and low-fi with a strong classic-rock influence.

“He’s like the love child [of] Eric Clapton and Jess Magnum,” Caolan said. “His smooth, lethargic melodies have great vibes that lead me to reminisce about good times in the past.”

When Lindsay was younger, he wasn’t interested in music because he heard only mainstream radio tracks. Seeking something more, he began to listen to older music selections.

“The turning point was probably in about fifth grade when my fifth grade teacher played us ‘Yellow Submarine,’” he said. “It was just like, ‘Woah, this music stuff is actually pretty interesting.’ So, then I sort of spent a lot of time dabbling in it.”

Lindsay’s guitar playing is greatly influenced by Jimi Hendrix because he conveyed multiple genres, including blues, jazz, rhythm and blues, funk, and processed them into dramatic, electric lead guitar chords.

“There’s guitar before Hendrix, and there’s guitar after Hendrix,” he said. “I don’t even know how to describe him sometimes. He’s just so groovy … He was a maniac on guitar. I try to be as much of a maniac as possible but in a different way.”

After he found an interest for music, Lindsay began to sing in the church choir and joined his high school’s chorus instructed by the high school’s music teacher, Michael LeRose.

“You couldn’t find a more enthusiastic, energetic, passionate person when it came to being involved in music,” LeRose said. “Lindsay contributed much to our music classes and extracurricular chorus and jazz band. He is ‘enjoyableful’ to be around.”

At the college, Lindsay majors in business administration with a minor in audio production. He said he would like to be more on the business side of music with the hobby of performing.

“I want to make something with music and business, so we’ll see what happens,” Lindsay said. “I perform for myself and for the music, not for the money.”