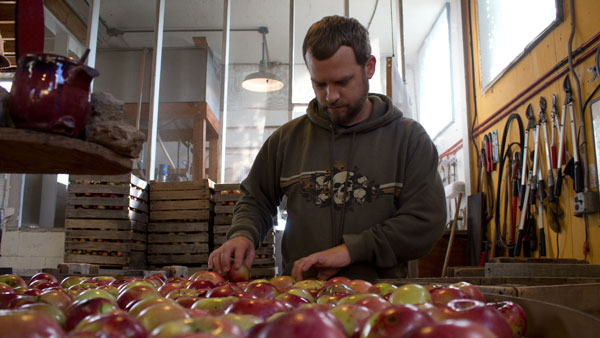 In the crisp bloom of apple season, Amara Steinkraus, assistant orchard manager of Littletree Orchards, walks up the hill to her family’s farm as the September mist rolls through the seemingly endless rows of apples. In addition to preparing for the Ithaca Farmer’s Market and U-pick, when locals and tourists are invited to pick apples along with other fruits and vegetables, Steinkraus gets ready for the busy apple season, including the 31st Annual Downtown Ithaca Apple Harvest Festival.

Once a small street fair on The Commons, Apple Fest has grown to become a three-day festival that attracts more than 30,000 people each year. Littletree Orchards has been involved in the festival since its opening year in 1982. It will return Oct. 4–6 for this year’s celebration, selling apple-cider doughnuts and apple butter in addition to its apple cider. But the change in location for this year’s festivities is requiring Littletree, along with other Apple Fest vendors, to plan ahead.

Traditionally, Apple Fest has been held on The Commons. However, the downtown area’s currently disheveled condition as a result of the construction has forced the Downtown Ithaca Alliance, the organization that plans the festival, to run it differently this year. Apple Fest will still be near The Commons on State Street, South Cayuga Street and North Aurora Street but not in the same layout as years past.

The dramatic changes to The Commons have required significant planning on the Downtown Ithaca Alliance’s part. The events manager, Patricia Clark, said she wants to avoid complications similar to those while planning this summer’s Ithaca Festival, which lost the organization significant revenue.

Clark said aspects of Apple Fest change each year, so the construction won’t prevent anyone from fully participating in the weekend event, even with The Commons in its unrefined state.

“Every year is different,” Clark said. “Part of the fun of planning an event is trying to make a puzzle work the best you can; you want each piece to fit together. Things change, and it is really important to try and accommodate it and make it work the best it can in that time of change.”

The layout of the festival will be like a lynchpin, allowing people to interact with The Commons, even though the vendors will not be in the same place, Clark said. There will be two main areas of the festival. On the west side of The Commons there will be food and craft vendors, including Six Mile Creek winery, Little Grey Bakery, Bellwether Hard Cider and Twisted Tree Farm, and music performers, including Ithacappella and Premium Blend, as it has traditionally been in past years. On the east end of The Commons, next to the Community School of Music and Arts, there will be a large farmers’ market, more food vendors and games surrounding a big stage. In the middle of the festival, a corridor will have musical performers and sculptors to tie the two ends of the festival together.

In preparation for Apple Fest, Steinkraus has spent her days in a barn either pressing cider, grading or picking apples. Her main focus is prepping the cider from 6:30 a.m. to 6 p.m. During that time, Steinkraus can complete about five presses a day, which collectively yields about 500 gallons of cider. Each press requires 25 bushels of apples, so the entire process averages out to about 125 bushels a day.

Steinkraus said apple-harvest season begins in September and ends in early October. Generally, the apples used to make these products bloom in May and gradually ripen as September draws near. Ithaca’s inconsistent weather in the past year, however, has presented unpredictable yields for farmers. Last year, most farmers experienced more than a 70 percent loss of fruits, Steinkraus said, and Littletree was no exception. But fortunately for Littletree, there are more apples than crates this season.

“We can never have enough cider,” she said. “We almost always sell out.”

Each apple is picked, washed and sorted. When Steinkraus begins to prep the cider, the apples’ form quickly turns into juiceless pieces as it is pressed, and the sweet smell of apples permeates the air.

Steinkraus said the dark color and slimy texture of apple seeds, along with their taste, determines whether or not they are ready to be harvested. She said picking apples is the best way to harvest them so that they do not bruise. After the apples have been picked and graded, they are sorted based on their level of bruising.

Autumn Stoscheck, owner of Eve’s Cidery and long-term Apple Fest vendor, said orcharding is a long-term process that changes with the seasons.

“What we do during the winter, like turning or working in the cider barn, is really different from what we do during the harvest when we are madly gathering apples and putting them into crates,” she said. “I really love that diversity and the changing throughout the seasons.”

The changing of the seasons, however, can be a much easier transition than changing the layout for an annual event like Apple Fest. Even though vendors are unsure of what the new location will bring, Clark said the Downtown Ithaca Alliance has adapted the layout for the best possible outcome.

“It is important for communities to celebrate, and to celebrate collectively,” he said. “This is one of the few times we get to do that. It really is an opportunity to showcase the community and downtown to the region, the students and to people who are new to the area.”