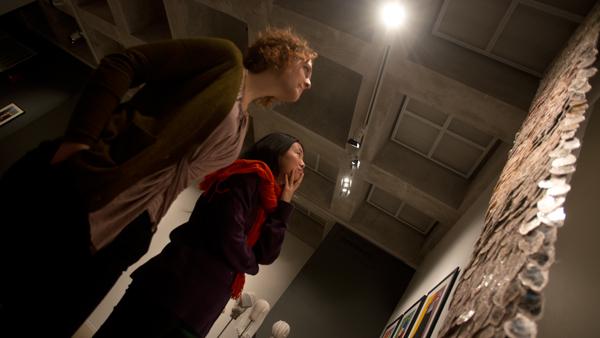 Rachel Woolf/The Ithacan
From left, seniors Kate Calleri, a Handwerker Gallery monitor, and Leaf Ye look at “Wingcloth” by Rebecca DiDomenico on Jan. 24 at the Handwerker Gallery. The piece of art is made up of several butterfly wings threaded together.
By Mimi Reynolds — Contributing Writer
Published: January 30, 2013

Above the loud, enthusiastic conversing of onlookers, somehow the gentle click of a slide projector can still be heard. Viewers lean toward a ghostly image of a nude woman clutching what looks like a large, pregnant belly in Fatma Charfi’s “Another Space.” In moments of clarity, individuals squeal “Oh!” and “I see now!” when they recognize the woman’s stomach is a plastic bag filled with beans.

“The Veil: Visible and Invisible Spaces” opened at the Handwerker Gallery on Thursday evening. Curated by Jennifer Heath, this traveling exhibition investigates barriers between cultures, gender and religions through the concept of a veil, as the collective work seems to connect people, ideas and cultures. Handwerker Director Mara Baldwin said viewers have to look more closely to gain the full essence of the art.

“Getting closer to a piece really necessitates a dialogue and really encourages further questioning,” Baldwin said. “Veiling is not just connected to Islamic culture but is everywhere. It’s about partition and making boundaries that are both built by people and enforced by people.”

The exhibition contains the work of 32 artists, each exploring a myriad of contemporary issues on gender, religion and cultures through media such as sculpture, installation, film and slide projections.

This show is the Handwerker Gallery’s first incorporation of iMacs. For eight interactive pieces in the show, the iMacs allow the user to watch documentaries about the comparisons between Iranian and American culture and take surveys satirizing cultural conceptions of marriage, sex and gender.

Junior Andreas Jonathan, an architectural studies major, said this exhibit was fascinating because of its interactive quality.

“A lot of the show is feel and touch and click,” he said. “Even the things that I’m not physically touching, I’m touching and feeling it with my mind.”

At first glance, Mary Tuma’s piece “Homes for the Disembodied” is composed of five silk dresses, individually hung. Upon further examination, viewers discover Tuma’s piece to be an unending flow of 50 yards of silk, connected at the hem. What first appears to be a sturdy mosaic slab from far away transforms into a delicate collection of butterfly wings.

Jonathan said the exhibit changed his initial understanding of the veil because of its ties to Islam and fear.

“Something that really struck me was that it seems like something you should almost be afraid of, with the associations with the Arab world, that is, in turn, associated with terrorism.”

Some artists used humor in their pieces to draw viewers. One example is Anita Kunz’s “Girls Will Be Girls,” a painting depicting a scantily clad blonde woman wedged between a nun wearing a habit and woman wearing a burqa. Toying with present cultural misconceptions of the veil in Islamic culture, the humor becomes a vessel for self-reflection. The humor creates an opportunity to understand what makes the art funny, as well as how humor creates barriers between cultures and individuals.

Baldwin said she tries to help students make connections with the artwork by applying the exhibit’s thematic elements with topics pertinent in and out of the classroom.

Cosponsored by the Ithaca College Department of Art History; Women’s Studies Program; Center of LGBT Education, Outreach and Services; School of Humanities and Sciences; and the Gannett Center, the Handwerker Gallery will host a lecture series in conjunction with “The Veil: Visible and Invisible Spaces,” titled “Rooms of Their Own: Humans and the Second Skin.” The symposium will have lectures, discussions and films centered on clothing’s mediation between the body and space, which will begin Thursday and close Mar. 7.

On Feb. 14, guest lecturer Gabriella D’Angelo will host “garmITECTURE,” a term she coined in her exploration of clothing as architecture. D’Angelo said the lecture will enhance the full understanding of the exhibition through its association with history, art and gender issues.

“There are going to be some really great moments in the symposium that will connect and fortify the overall intention of the exhibition,” D’Angelo said. “It’s an incredible opportunity for students to learn about a multitude of things: art, architecture, fashion, women’s rights, gender, history. It’s more than just an art exhibition; it connects into a lot of different studies and interests that go way beyond the art world.”