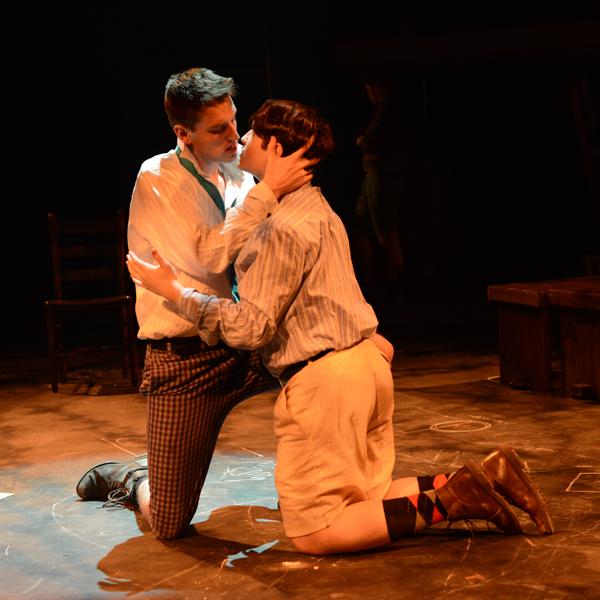 “There’s a moment you know you’re f—ed.” Teenagers have come to this conclusion in America today, but it turns out they also came to it in 19th-century Germany, drawn out in the musical “Spring Awakening.”

Running until April 6, Ithaca College’s theater department will produce its second sold-out musical of the year, “Spring Awakening,” in the Clark Theatre. The Tony Award-winning musical surrounds a group of teenagers who struggle to figure out who they are while dealing with issues regarding sexuality, their upbringing and their friends and families.

The plot surrounds Wendla (senior Sarah Charles), a sheltered, pubescent schoolgirl who is clueless about human sexuality because of her mother’s overprotection and discomfort with sexuality. She begins to understand what sexuality really is through her blossoming relationship with her friend Melchior (sophomore Coleman Hemsath). The show also touches on their friends dealing with their own dark issues regarding sexual abuse, schoolwork and suicide.

Charles said while she watched Lea Michele perform as Wendla in the original show, which came to Broadway in 2006, she didn’t try to mirror her performance. Instead, she said she prepared for this role by analyzing the script and watching videos of ballerinas and rock stars to get ready for the high-energy numbers, many of which involve using handheld microphones.

“I kind of just try to make it as much of my own as I can,” Charles said. “I’ve been watching [videos of] P!nk and all of these rock stars … do their thing.”

Preparing for these roles involves having to deal with the heavy issues that run throughout the show. One in particular involves Wendla finding out what the act of sex is after the infamous lovemaking scene with Melchior at the end of the first act. They perform this scene on a raised platform during the acoustic guitar-based song “I Believe,” featuring the whole cast. Hemsath said the choreography of the scene, using the term “sexography” to describe it, was different because he had to learn how to portray sex from his college professors.

“It’s just such an interesting college experience, because your professors are standing over you while you’re emulating sex and telling you when to insert, when to pull out, it’s like, ‘Wow, I never thought my college professors would tell me when to pull out,’” Hemsath said.

Though the two perform such an intimate scene together onstage, Hemsath and Charles weren’t close friends before rehearsals began. Hemsath said performing this scene together has strengthened their relationship.

“I didn’t really know Sarah that well before the show, so kind of making out and being on top of her has kind of made us come to a relationship,” Hemsath said. “You have to be kind of easygoing and fun with the severity of this context.”

The musical touches on homosexual relationships as well as heterosexual ones in the form of the relationship between Ernst (senior Michael Kushner), a shy schoolboy, and Hanschen (junior Stephen Humes), Ernst’s charming classmate. While Kushner is gay and Humes is straight, Humes said their sexual orientations don’t affect how they perform together.

“It doesn’t matter, really,” Humes said. “No matter who you love, it’s about what it is to love, not about who that person is on the other side, so it really isn’t something I think about.”

Director Norm Johnson said this show is important because it reflects mindsets spanned across generations.

Some of composer Duncan Sheik’s upbeat songs, like “Totally F—ed,” which the whole cast sings, express the angsty side of the children through explicit lyrics and energetic choreography, while softer, acoustic songs like “Mama Who Bore Me,” which Wendla sings, ask questions about life. Music director Joel Gelpe said the music contributes to the show’s dramatic quality because it isn’t like more classically-based showtunes.

“I think the music in this show reflects perfectly what’s going on dramatically,” Gelpe said. “There are a lot of mellow introspective moments in the show. There’s always this underlying kind of pain and danger getting found out, and sometimes it manifests itself with this almost hypnotic music.”

Though Johnson said the rock score was popular among the performers, he said he thought it was difficult for some of them to sing this type of music because either it didn’t always suit their classically trained voices or they “didn’t have the chops to sing it without strain.” Charles said the music tested her when preparing for Wendla because of her classical background.

“It’s just a different energy and style,” Charles said. “So it’s definitely been a challenge, but a fun one, because everyone likes to be a rock star.”

While Johnson said he expects the audience to be moved by the “wonderful music” and “become uncomfortable,” Charles said she expects the show to spark some controversy because of its explicitness.

“I think there are going to be some haters,” Charles said. “But that’s awesome.”

However, Hemsath said the show needs to have these risque qualities, because it’s meant to offend people, adding that his grandmother will be in attendance.

“It needs to be racy, it needs to make people get angry, or fall in love,” Hemsath said.