IC Bigs to host battle of the bands 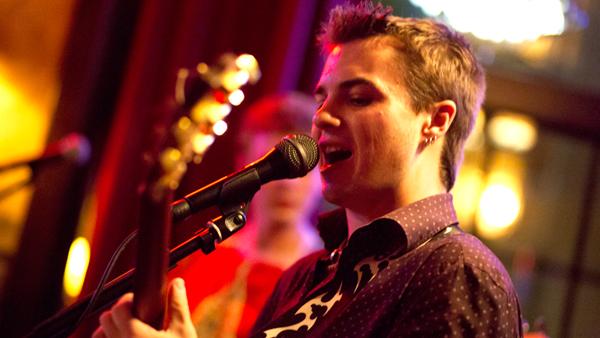 Shawn Steiner/The Ithacan
Senior Erik Caron performs with his band The Erik Caron Connection at Kilpatrick’s Publick House on Sept. 22. The band will be one of four bands to perform at the IC vs. CU Battle of the Bands charity concert on Friday at Oasis.
By Evin Billington — Staff Writer
Published: November 29, 2012

Cornell University and Ithaca College are about to begin a new rivalry. On Friday, two of each school’s student bands will face off in a battle of the bands concert put on by both schools’ Big Brothers Big Sisters clubs to benefit the Ithaca Youth Bureau.

Teaming up with Cornell’s chapter of the club, IC Bigs plans to host this concert at Oasis on Friday. All proceeds will be donated to the Youth Bureau, which both clubs sponsor. At the end of the night, one band will be declared the winner and receive a $50 gift card to Oasis and airtime on WICB. There will also be a raffle with prizes for audience members.

Junior Juan Tamayo, IC Bigs fundraising chair and head organizer of the concert, hopes to raise between $1,200 and $1,500 to benefit the Youth Bureau’s programs and help them buy supplies for the children.

IC Bigs plans to feature the student bands The Erik Caron Connection and The Yips, two groups that Tamayo hopes will draw a crowd.

“They have a pretty good following,” Tamayo said. “I know some of their previous shows, they’ve been sold out at The Nines.”

Representing Cornell, the student band Sammus and solo artist David Markowitz plan on performing against the college’s student bands. At the end of the night, a winner will be crowned.

Besides $50 the club spent on printing flyers and tickets, all of the money raised will go toward the Youth Bureau. Tickets bought before the event will be $5; they will cost $10 at the door.

“This [money] will go towards keeping the programs running that they currently have, probably even like lights and stuff, stuff that doesn’t sound as cool, but they need to keep it running, because they’ve had a lot of budget cuts,” Tamayo said.

Drawing students to the concert has been an especially important task for Tamayo. He said one of the college’s radio stations, WICB, has been advertising for the concert throughout the week. On Friday, Tamayo; senior Jamie Edelson, IC Bigs president; and Cornell Bigs President senior Anil Singhal will visit the radio station to plug the event.

In previous years, Cornell put on the concert, but Tamayo said Cornell asked IC Bigs to participate because they were unhappy with the audience turnout.

Singhal said Cornell Bigs wanted to include the college’s chapter in the planning and execution of the concert because they both sponsor the Youth Bureau.

“I know with Ithaca having a bit of a larger music scene than Cornell, it seemed like a great way to collaborate and have a larger event that reaches more people and will hopefully benefit the Youth Bureau in a bigger way,” Singhal said.

Edelson said IC Bigs has worked with the Youth Bureau for many years, bringing club members to the bureau a few times a month to spend time with the children there.

“[The Bigs] program matches adults or college-age students with younger children in the community who need a mentor,” Edelson said. “That’s the primary thing is they match up kids with a mentor.”

Tamayo sees the friendly rivalry against Cornell as a way to unify the college, similar to the way Cortaca does against SUNY-Cortland. IC Bigs is encouraging Ithaca students to wear blue and yellow to show their school spirit.

“One of the things at Ithaca College that needs help is the school spirit, and a lot of students have pride for their distinctive school, but when there’s Ithaca College things, it’s pretty much just Cortaca,” Tamayo said.

Tamayo said he hopes the concert will become a tradition for the club that will potentially draw more students to join.

“In 10 years if we come back and this thing is still going on, how awesome is that going to be?” Tamayo said. “I try to do the best job I can with anything I do, especially if it’s going to impact other people, so I hope this can be one of those great events.”