Jitterbug: Students’ use of caffeine increases during midterm period 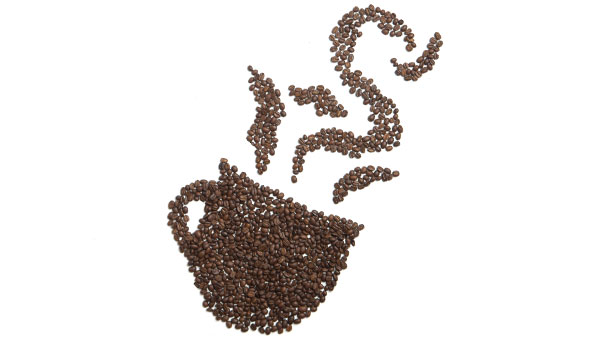 It’s 9 a.m. and the line for La Vincita, one of the few places on the Ithaca College campus that sells a bevy of caffeinated products, is almost out the door. While some students may be buying breakfast food, the crowd around the beverage counter suggests that many are getting their caffeine fix.

As midterms approach, students are loading up on a combination of caffeine products to keep going all day and into the night. In a survey conducted by The Ithacan, 74 percent of student respondents said they have between one and three cups of a caffeinated beverage a day, and 65 percent of respondents said coffee was their preferred caffeinated drink, while only 16 percent said they regularly drink energy drinks.

A recent study at Newcastle University, which researched the effects of caffeine in honeybees, suggests that caffeine may actually improve memory. This bodes well for students who load up on caffeine during midterms and finals, but increased use of caffeine also poses some serious side effects for consumers.

Freshman Gabriela Parada began drinking coffee when she came to college in order to remain alert during her classes. She drinks one or two cups a day, but she said she is already hooked and is experiencing some unsavory side effects.

“I hate it because now I’m addicted to it, and I get really tense or nervous when I don’t drink it,” Parada said. “I can’t write, and it makes me really jittery. It helps me stay awake, but as far as being able to write anything down or concentrate on one thing, it’s nearly impossible.”

Nancy Reynolds, the college’s health promotion center program director, said many students may not realize exactly how much caffeine they are ingesting throughout the day.

“If you drink a large coffee in the morning, if you’re drinking an energy drink or caffeinated soda later in the afternoon, and you’re taking a cold or headache medication that contains caffeine … it can really add up,” Reynolds said. “It’s important to be mindful about having a plan for how you’re getting your caffeine and what dose is going to be optimal for you.”

For sophomore Elise Edmonds, her one to two cups of coffee a day is simply a part of her routine, which she said has few negative effects.

“If I go without caffeine for a day or two, then I’ll get a headache, but it normally doesn’t bother me that much,” she said. “I take it in the morning to wake up, and it’s also kind of therapeutic in the morning.”

Edible caffeine, like the AWAKE chocolate bars sold in coffee shops around campus, have also gained popularity at the college. AWAKE has about 101 milligrams of caffeine per serving, which is about the same as a cup of brewed coffee. Edmonds said she has tried the chocolate, but is not convinced it is much better than a cup of coffee.

“When I first tried the chocolate, I was like, ‘I don’t feel like having coffee, but the chocolate sounds good, so let’s just see,’ but it didn’t really get me far.”

There are also organic methods for getting a dose of caffeine. One is Guayaki’s Yerba Mate drinks, which are available locally at GreenStar Cooperative Market. Yerba Mate is a plant that has about the same amount of caffeine as coffee. Mateo Sluder, Northern California cebador, a traditional server of mate who ensures the quality of the beverage and shares it in social circles, is the area sales manager for Guayaki. He said mate tastes a bit like grass, but most of Guayaki’s drinks are fruit-flavored. Guayaki makes various energy drinks with Yerba Mate, including energy shots, which contain about 140 milligrams of caffeine, and canned sparkling mate, which has about 70 milligrams per serving.

Though not on Ithaca’s campus, Guayaki’s Yerba Mate is available in the dining halls and campus food stores of about 50 other universities across the country, catering to who Sluder said is the brand’s top customers — college students.

“It very often becomes 1/3 of the caffeinated liquid coming out of a dining establishment, because students really quickly figure out, ‘Oh, this gives me all the stimulation and focus that I want, I don’t shoot to the moon and crash and burn,’” Sluder said.

Sluder attributes this less-jittery feel to the biochemical theobromine that is found in Yerba Matte. He said theobromine is also in chocolate and acts as a euphoriant.

“With mate … it kind of lifts your spirits and also relaxes many parts of your body,” he said. “Theobromine seems to best explain why people have the experience of being uplifted, not having the jitters, not having the crash and having their spirits lifted.”

According to Reynolds, other ways to stay energized and focused do not have to involve caffeine at all, like taking a brisk walk for a study break.

“Some studies have shown that eating a piece of fruit like an apple can improve concentration even better than caffeine without the negative side effects,” she said.

Cathy Saloff-Coste, the college’s dietician and nutrition consultant, said the most natural way to get energy is by staying healthy. Keeping basic good nutrition and sleeping for at least seven hours a night can help maintain healthy energy through midterms and stressful periods.

“If you’re eating well and exercising and doing your best to get at least seven hours of sleep, that will really help to keep your energy as strong as possible,” Saloff-Coste said.

Sophomore Ryan McSherry usually drinks about four cups of coffee a day, especially during midterms and finals when he must stay up late into the night to complete projects.

“When you’re up until 2 [a.m.] for a week straight … you’ve got to have at least one [cup],” he said. “Once I start losing sleep, intake goes through the roof.”

McSherry said he does not think his caffeine intake impacts his class performance much, but his cycle of drinking coffee to stay up later and sleeping less may be extremely harmful. Reynolds said getting a full night’s sleep is extremely important, especially when studying.

“New memories get consolidated during sleep cycle, so if you’re doing a lot of studying and you’re up late into the night and you’re consuming caffeine, research has shown that you’re not going to be able to retain all those memories, so that’s counteracting all the studying that you’re able to do,” Reynolds said.

Despite these risks, Reynolds said the effects of caffeine can be different for everyone. During stressful times, like midterms, she recommends that students stick to the energizing methods they are already used to.

“Take some time to think about what your experiences have been and what has worked for you in the past, and don’t step outside of that during times of extra stress,” she said. “Creating that balance for yourself I think is probably the healthiest way to go.”