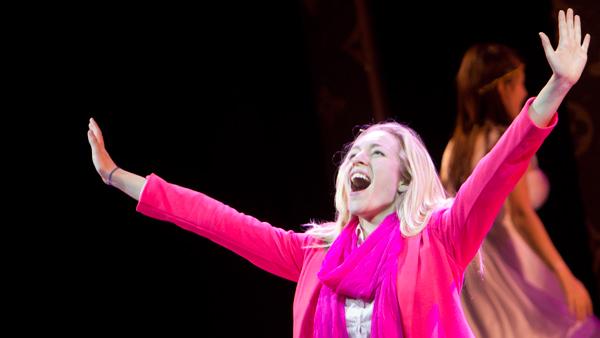 After two three-hour sessions in a salon chair, senior Megan Ort said she can’t say blondes have more fun. But thanks to her newly dyed locks, she feels confident enough to slip on her pink stilettos and take the stage as Elle Woods in the Ithaca College Main Stage Theater production of “Legally Blonde.”

The musical, an adaptation of the movie starring Reese Witherspoon, was written by Heather Hach and will run Nov. 1–10 in the Hoerner Theatre in Dillingham Center. Ort will be performing in half of the performances, as she and senior Chloe Tiso were both cast as the lead, Elle.

Because Elle is such a physically demanding part of the production, Tiso has been pleasantly surprised with the double casting of her role. She said while she has enjoyed being a part of the cast, she can’t wait to be a part of the audience.

Despite Witherspoon’s strong presence in the film, Ort believes her musical performance will reflect her own individuality and personality.

“I liked Reese Witherspoon’s performance a lot,” she said. “Of course I’m not going to copy it. I really want to emulate her strength.”

Though Ort does admit to watching the movie in preparation for the role, she said it shouldn’t interfere with the audience’s perception of the musical.

“The movie is a whole other animal,” she said. “It’s its own story, and it was quite easy to forget what the movie was. The musical is very structured, and a lot of the story is sung, which is very contemporary.”

Ort said Emmett, Elle’s eventual love interest played by senior Joe DePietro, has a self-discovery that is parallel to Elle’s own journey throughout the show. She said in the first act Emmett helps Elle when she allows herself to swallow her pride. But in the second act, Emmett finds he wants to impress Professor Callahan, played by junior Roger Dunkelbarger. In response, Elle takes him shopping.

“She teaches him looks do matter, and it’s not a perfect world,” Ort said. “You can go a long way with a brain and a good shopping spree.”

Likewise, Tiso said the same number, “Take It Like A Man,” is her favorite to perform because of the shift in roles.

“It’s a moment when their relationship comes full circle and she is teaching him something where he was teaching her when she first came to Harvard, “ she said.

Tiso and Ort both have found themselves preparing for the role by “hitting the gym” more often to get in shape for Elle’s constant stage presence. Tiso said learning to dance, act and sing at the same time has been especially challenging for her.

“She really has to do so much all at once on stage,” she said.

Senior DeAnne Stewart, who plays Paulette, a local salon owner who befriends Elle, said her character acts as Elle’s guide throughout the musical. Because the show is set on college campuses, Stewart said she thinks the college community will find the production to be especially entertaining.

“It’s one of those shows that my friends can come to and be able to understand,” Stewart said. “It’s a cool product of our generation.”

Senior Richard Lindenfelzer, who plays Warner, agrees with Stewart in that the show is fun because of its contemporary and upbeat nature. He found inspiration for his role in people from his hometown located an hour outside of Cambridge, Mass.

“You can draw from very real people,” Lindenfelzer said. “I know exactly what these kinds of people are like — prep school kids who have been training for the Ivy League since they were 10.”

The cast and crew for “Legally Blonde” have rehearsed for three hours every night since August in preparation for the show. It wasn’t until three weeks into rehearsals that guest choreographer Roy Lightner joined the creative staff. Despite his late arrival, he said the cast was ready to face the challenge of learning all of the numbers in a week and a half.

“The fact that they learned the choreography in that short amount of time was really intense,” he said. “But they all stepped up to the plate, and I’m really proud of what they accomplished.”

Lightner said the musical runs the gamut, showcasing a diverse collection of dance styles. He said there is everything including a hip-hop marching band number, a dance involving jump ropes and even a nod to Irish step dance.

Because of the cast’s strong focus and dedication, Lightner attributes the smooth preparation process to the cast’s readiness to practice and perform.

“They are all so open to growth,” he said. “I like to say that they are hungry. They like to hang on your word and are intent and very motivated. It’s wonderful.”

Behind the scenes, scenic designer Tom Burch said while “Legally Blonde” has been a very enjoyable show to work on, it has posed its challenges. The show has 22 locations, more than 26 scenes, and some songs contain three or four locations, making for plenty of quick set changes.

One of the most difficult parts of putting the set together, Burch said, was making the transition from light, airy California to collegiate New England. However, plenty of research aided the process.

“We did a lot of research of sorority houses and then Harvard,” Burch said. “We made sure that we kept the flow of the story moving. It is very much based on the flow.”

While she said she agrees “whoever said orange is the new pink is seriously disturbed,” Ort admits that she has been turned on to the bright hue since taking on one of the lead roles. Much preferring jeans and a T-shirt to fuchsia dresses, Ort said this performance is a change of pace, yet she feels ready to engage the dominantly college-aged audience.

“I just really enjoyed bringing out the relevance of a musical to people our age,” Ort said. “I find because it is such a contemporary musical, it speaks to our generation.”

Tickets for “Legally Blonde” are available through the Ithaca College Theatre box office and range from $5.50 to $11. Contact 273-4497 for more information.