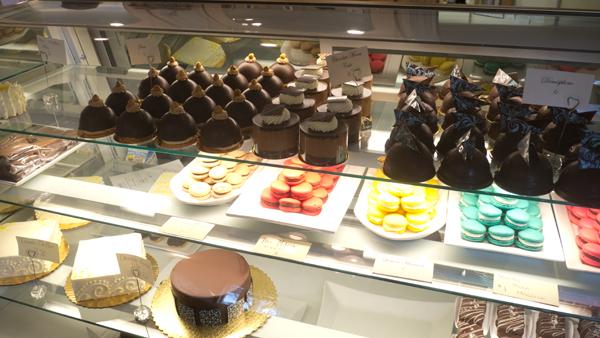 Tucker Mitchell/The Ithacan
Treats line the glass shelves of Sarah’s Patisserie on April 12 at its location on Pleasant Grove Road. The patisserie is expanding to Seneca Place, one block off The Commons in mid-May.
By Taylor Rescignano — Staff Writer
Published: April 24, 2013

A couple of friends laugh over tea and chocolates, a mother and her children escape the rain and take a few treats to go and an older woman talks casually with the store owners, while occasionally looking at a case of tarts, cakes and chocolates. Everyone seems to be overwhelmed with joy as soon as they walk through the front door of Sarah’s Patisserie.

The shop’s signature Sixth Avenue cakes, which are a combination of chocolate cake, coffee buttercream, hazelnut meringue, chocolate mousse, creme brulee and chocolate ganache, line the register underneath clear glass, along with other cakes, tarts and chocolates.

Sarah’s Patisserie, a local bakery at Community Corners on Pleasant Grove Road, will soon open a second location at Seneca Place, one block away from The Commons. It is scheduled to open by mid-May. The building had only been used as office space prior to Sarah’s Patisserie’s construction.

Sarah Jefferis and Tammy Travis opened the patisserie in 2004 at their current location at Community Corners, but they said they wished to expand to keep up with the current Downtown Ithaca small-business boom.

“We love our current shop,” Jefferis said. “It is charming. It has a kid-friendly, bright feel. But downtown will be more like a destination location for people to come and watch Tammy make chocolate.”

Each dessert is handmade by Travis. She is a classically trained French pastry chef who worked under Jacques Torres, known internationally as “Mr. Chocolate,” at the French Culinary Institute in New York City. She was employed as his pastry assistant at Le Cirque 2000 in midtown Manhattan from 1999 to 2000 before moving back to the Ithaca area.

Gary Ferguson, the executive director of the Downtown Ithaca Alliance, said the group has been adamant about helping Sarah’s Patisserie find a suitable space downtown.

“We became extremely interested in Sarah’s after learning about their business plan and not just their interest in downtown but their incredible aptitude at doing what they do,” Ferguson said.

“We can connect with the students, the after-dinner-theater crowd and locals who are looking for a place to bring the in-laws,” she said.

Jefferis said the new store is not going to be a replication of the old one but will be redesigned in a 1920s Art Deco style.

“It’ll be somewhere you go with someone you love, or like a lot, after a movie,” she said, “It’ll be a place where you can get ridiculously fine desserts in the evening after dinner. It’s going to be a romantic Art Deco chocolate palace.”

Jefferis said the new patisserie will be decorated in shades of blue, brown and silver with hand-painted murals on the walls, handcrafted tables and a giant window in front. Customers and pedestrians will be able to see Travis hand making the chocolate before their eyes.

“I adore the Willy Wonka movie,” Travis said. “In that movie he has a chocolate room.”

Travis said she was inspired by the movie and set out to design a chocolate room of her own that would allow her to showcase her chocolate-making skills as well as entertain and educate her customers about the art of chocolate making.

“Tammy puts a lot of love into her dessert — her art, because she is an artist,” Jefferis said.

The Seneca Place location will be used solely for chocolate making and retail. All of the ovens and baking equipment will remain at Community Corners, where all of the sweets will still be available for sale. Early in the morning, fresh tarts, individually sized cakes, croissants, macaroons and eclairs will be delivered downtown from the original shop, but there will not be any large cakes, like the Sixth Avenue cake, sold there. The chocolate passion plaisir, which consists of layers of chocolate cake, vanilla buttercream and milk chocolate passion fruit ganache, will be sold uptown but can be arranged for pickup at Seneca Place.

“I want to create a patisserie that is unlike any location that Ithaca has at the moment or has ever seen,” Travis said. “And I will do it by creating a high-quality product.”