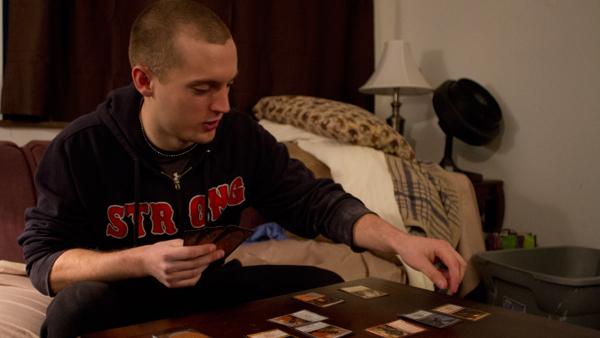 Two wizards, dubbed Planeswalkers, meet and battle to the death. Their weapons are spells they have picked up along their travels and magical creatures like dragons and angels. This is the story behind the trading card game Magic: The Gathering, in which two people use cards they have collected to reduce their opponent’s life points from 20 to zero.

The game, which was developed in 1993, is popular in the U.S. and has developed a following with some Ithaca College students, many of whom have been playing it since childhood.

Some student fans of the game congregate in the Magic: The Gathering Club, which president senior Matteo Mesiouris said has about 15 members. Mesiouris said the club is welcoming to players of all experience levels, and at meetings they usually play and talk about the game.

“We play various formats,” Mesiouris said. “It’s a trading card game. It’s not very complicated. People come in from various levels of the game, beginners or experts. There’s guys who come to the club who are not from the school but from town, actually. We play, we teach people who don’t know how to play how to play if they’re interested.”

The game involves two players with a deck of about 60 cards. These cards are different types: land, creatures, enchantments, planeswalkers, sorcery, instant and artifacts. The cards list which other cards they can have an effect on and what kind of damage they will do to the opponent. Some cards, like enchantments, can help cards like creatures get more powerful and increase the damage that card will do to the opponent. Players take turns drawing cards and doing damage to each other until all life points run out.

Junior Isaac Ford said he does not get many chances to play now, but it was a popular activity with him and his friends in middle school and high school.

“Sometimes we’ll play it when I go back home, for instance, or on breaks and stuff,” Ford said. “It’s something that we can all get together and we all know how to do or like to do occasionally.”

Though Ford began at a young age, he said he picked up on the game easily with the help of his friends who were already players.

“I think it’s pretty easy,” Ford said. “You just have to learn the structure of the game. To learn the more intricate details, I think takes a lot more time. I think anyone could really start playing at any point, and it’s not too hard to pick it up.”

Like Ford, Mesiouris said he began playing the game with friends about when he was in elementary school. He said he was fascinated by the artwork and the method of gameplay.

“I’m a weird guy, and it’s a fantasy-based game,” Mesiouris said. “The pictures were cool, the art was cool, the game itself was interesting. To a 10-year-old kid, it’s a lot of fun. You don’t really get into a game by yourself.”

Though the basics of the game, as Ford said, are relatively simple, junior James Earl, a member of the club, said as a player gets more invested in the strategy of the game, the more complicated it becomes.

“It’s all about trying to find the best deck that works for you and fits your personality,” Earl said. “It’s a great balance where you can be really amazing at it but you can still have fun and still have a circle instead of just beating everyone.”

There are many different formats of gameplay that involve the different card decks that are released every year. Each deck has a different story. Earl said there is an expanded universe aspect to the game that fans can experience through video games, comics and novels. Fans can follow different story lines involving different characters and get even more immersed in Magic: The Gathering universe.

“What’s really cool about it is that each year, they come out with two or three different blocks for the year,” Earl said. “Each block has a story with different worlds. Learning how they all tie together and how they all work is just really, really cool, because it’s a story that can adapt to many different things. They’ve done a Chinese one; they’ve done a Gothic Horror one. So it’s very malleable and yet still connected. It’s just very cool.”