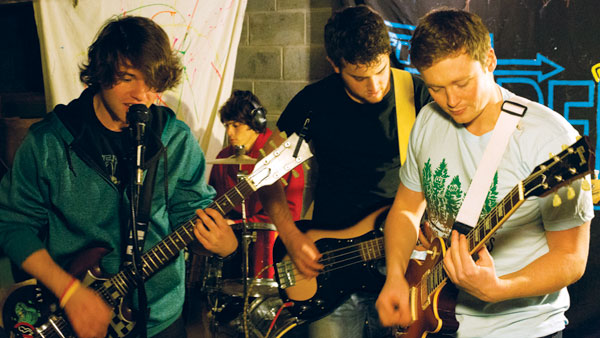 As freshmen walking onto the Ithaca College campus for the first time, four men could only dream of touring, performing and making music their career. Four years later, The Danbees — now best friends and current seniors Mark Slotoroff, Will Shuttleworth, Wade McManus and Jake Alvarez — have taken their talents and created a popular Ithaca band with a strong fan base and a debut album.

The Danbees released their first album, “I’m in Control,” on Feb. 18. Mike Parker and Alex Perialas of Pyramid Sound Studios in Ithaca mixed and mastered the all-original release, which was recorded over eight days in January.

In order to produce the album, the band raised about $10,000 through a Kickstarter campaign, an audience-funded platform that helps make creative projects a reality. Within 32 days, they had raised the money.

Every day, the band members came into the studio at 3 p.m. and worked on recording their material until 3 a.m. First, they laid down the bass and percussion tracks, and then Shuttleworth and Slotoroff recorded their guitar and vocal tracks.

“Come in, three o’clock, everything’s set up, ‘All right, what song do we want to try first?’ We’ll be sitting there as a band, do it all,” Slotoroff said. “Jake and Wade were done by the third day, and then it just came down to Will and me … It was a long process, but as soon as it was over, I immediately missed it.”

The Danbees have released “I’m in Control” to the public for free at their future shows and as a free download on their website. They decided to release the album free of charge because Slotoroff said he thinks complete albums are rarely ever listened to, and no one, aside from family members, would buy it. The band wants people to listen to the album so it can build a bigger audience.

“We figure, if you’re going to have our album, we’re not going to make you pay for it because you’re just not going to do it,” Slotoroff said. “We just want you to have it.”

Junior Joey Gallagher, a fan of the band, especially liked the album because he had already heard and enjoyed many of the songs.

“I really just loved the group of songs they put together for the album because they were the songs that I loved hearing the most at the shows,” Gallagher said. “It’s tough for me to pick a favorite because they are all great.”

Slotoroff and Shuttleworth met freshman year because of their shared interest in playing guitar and music. They soon became friends and began jamming together. The two met Alvarez at parties that year, and after forming a friendship, they invited Alvarez to play drums with them sophomore year. The three became more serious about their playing and invited McManus to join them on the bass junior year. McManus had never picked up the bass before, but he was a talented guitarist, so he decided to try it out. With the addition of McManus, they officially became a band.

“Second semester of junior year, I was waiting outside one of my classes,” McManus said. “Mark was walking by, he knew I was into music, and he asked me if I wanted to come over and jam because they were looking for a new bass player. I was like, ‘Well, I’ve never played bass before, but I’ll give it a shot,’ and [we’ve] been together ever since.”

Eventually, their casual jam sessions turned into practicing five days a week and headlining at shows in Ithaca as The Danbees. Their first show was March 1, 2013, at The Nines.

The musicians decided to call themselves The Danbees last year when they first began performing. All four members lived on Danby Road in Ithaca at the time, so they thought that it would be a cool name. In order to give the name an original spin, they spelled it with a double “e” instead of a “y.”

The band’s sound is full of both energy and rock ‘n’ roll with heavy bass, groovy guitar riffs, exciting beats and raspy vocals. Some of the band’s influences include The Beatles, Pink Floyd, Third Eye Blind and The Strokes. The group creates original songs at practice, and one of the members starts to improvise a tune, and then the rest of the members join in, trying to figure out what sounds right with it. Eventually, they write lyrics and a score.

Slotoroff said even if they have a rock sound, The Danbees often deviate from one set genre, sometimes covering pop groups like Destiny’s Child. They don’t try to incorporate too many instruments; they keep it simple with the basics — two guitars, drums and a bass — and still maintain a quality sound.

“We’re dance-y rock, somewhere between rock and roll and alternative rock,” Slotoroff said. “I think there’s a lot of bands with a gimmick … They’ll bring in all sorts of different string instruments, but I was just always given the impression that it doesn’t matter what the instrumentation is as long as the songs are good, it’ll come out well.”

Senior Emma Knighton has been The Danbees’ manager since Thanksgiving break in 2013. The band members asked her to be their manager because she was good friends with them. Ever since she has taken on the role, Knighton said she has been constantly working to keep the band on track: She books gigs, schedules practices, handles money, manages their social media accounts, monitors their connections and email, runs online presences and helps to make all decisions that have to do with the band. Knighton said she believes the band has the talent and drive to become successful.

“I have never experienced a more dedicated or driven group of young men … We all give 150 percent all the time,” Knighton said.

Knighton has booked them gigs at local bars, like The Nines, charity events, such as the IC Special Olympics fundraiser March 18 in Emerson Suites and a few out-of-town performances.

McManus said many die-hard fans are willing to go to great lengths to see the band perform. Recently, The Danbees had a show in Syracuse, N.Y., at the Westcott Theater. On the night of the concert, there was a blizzard, but fans still drove from Ithaca to see them perform. McManus said they appreciate their fans and like that the fans enjoy their music. The majority of their fans are college students from both Cornell University and the college.

“We have a solid 30 or 40 die hard-fans that no matter where we play in Ithaca, what time of day, what day, they’re going to be there,” McManus said. “So, we can always count on them. If we play on a Thursday, Friday, Saturday night, we tend to pack the house. We bring a lot of people. All the people enjoy the sounds that we make.”

After graduation, the band plans to tour as many states as they can before they move to New York City and try to network, book gigs and get signed to a record label.

“We’ll live together for a month or two [on tour], whether it be in a van or in somebody’s garage, depending on where we are … we’re pretty confident that if people hear us, they’ll like us, so we just have to play in front of as many people as we can,” McManus said.