Parkies are McLovin it 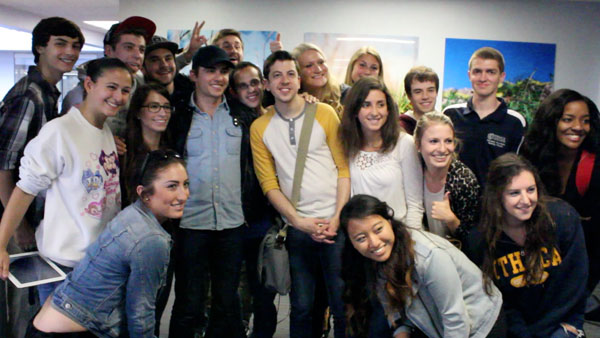 A Funny or Die camera crew raced down the second-floor hallway of Roy H. Park Hall, capturing the smiling faces of more than 200 excited students. Choruses of cheers and “woo-hoos” echoed through the hall as the crew came down, mixing in with the buzzing of general chatter. The students were eagerly awaiting their chance to see actors Dave Franco and Christopher Mintz-Plasse. The line, which wrapped around the entire floor, had some students waiting for hours.

Franco and Mintz-Plasse, along with the Funny or Die production team, paid a visit to the Roy H. Park School of Communications on Sept. 13 to film a segment in Park Auditorium for an upcoming “webisode,” called “Road Trippin’,” in which the actors attempt to teach a college course. Funny or Die is a comedy website that produces its own video content.

The presentation was geared toward teaching students the importance of creating original productions and providing them with tips on how to enter the emerging media industry.

Much to their enjoyment, the students in the audience were cast as the college class Franco and Mintz-Plasse taught for the comedy sketch. The presentation was part of a promotion sponsored by LG entitled, “It’s All Possible,” in which Franco and Mintz-Plasse tour the U.S., doing activities they’ve always wanted to do. The journey took them from Las Vegas for skydiving to Colorado for flyboarding and Chicago to eat deep-dish pizza, bringing them to the East Coast to end their trip in New York City with a wrap-up party.

The Funny or Die executives originally reached out to the Park School, knowing they would find the right audience. Melissa Gattine, marketing communications manager for the Department of Marketing Communications, and one of the event’s main organizers, said the crew chose the Park School because it wanted an intimate venue to shoot in.

“The producers wanted a small campus with a great communications school, so students would get the most from their talk,” Gattine said.

Franco and Mintz-Plasse kicked off the lecture with their first-ever Funny or Die video, “You’re So Hot,” followed by two other segments, including the promo video for the tour. “You’re So Hot” featured Franco and Mintz-Plasse using explicit terms to describe “how hot” each other was. The purpose of showing the videos was to explain how the quality of their videos has evolved through the years.

Freshman Ashley Fearon was one of many students who got up at the wee hours of the morning, waiting outside Park 378 before the 9 a.m. ticket distribution to see Franco and Mintz-Plasse.

“I thought I would totally make the cut off because it didn’t seem like the wait would be that long,” Flint said. “I wasn’t that mad after; I knew it was a bit of a long shot.”

This event, originally meant for three television-radio classes, was opened up to all majors in the Park School. Jack Powers, associate professor of media arts, sciences and studies, said he allowed his students to wait for tickets during class time because he felt they would benefit from the Funny or Die presentation. However, Powers said he had some concerns over their reasons for attending.

“The beneficial part is actually the content, but I think they’re going because it’s two celebrities,” Powers said.

Junior Grant Harrison said he agreed with Powers because the presentation could have been directed more toward production as opposed to the hype of the actors.

“A lot of people asked questions that were directed towards the actors and unrelated things to production aspects,” Harrison said. “I’m sure people who were there who were interested in the production aspect of it enjoyed that and learned a lot, but I agree with Jack.”

Diane Gayeski, dean of communications, said there are many opportunities in emerging independent media, and Funny or Die brought these concepts to life.

“Funny or Die is an example of clever, entrepreneurial and bold innovation in media creation and distribution,” Gayeski said. “The producers and actors actually echoed many of themes that I stress in my presentations to prospective and current students: Don’t just get a job, create your own brand and your own career.”