Presidential scandal: Student-written musical plays off history by putting a twist on the life of Lincoln 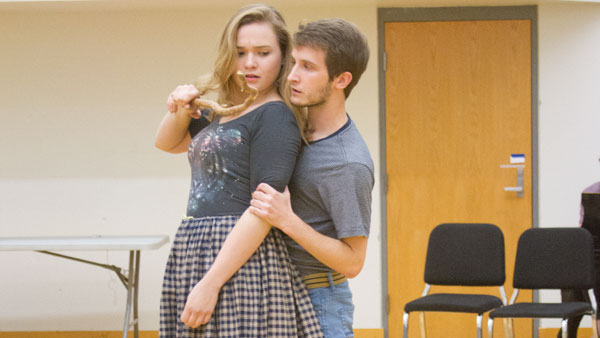 In the midst of the Civil War, a gay Abraham Lincoln forges a taboo relationship with his would-be assassin, John Wilkes Booth. Meanwhile, his sexually frustrated wife, Mary Todd Lincoln, strikes up a romance with the President’s chief officer, General Ulysses S. Grant, all set to the tune of original music.

“Gaybraham Lincoln” will debut at 5 p.m. Dec. 7 in Presser Hall in the James J. Whalen Center for Music.

The passion project has been years in the making. Two years ago, senior television-radio major Jared Corwin compiled an outrageously ambitious script — three acts with 15 scenes each — for his own enjoyment.

A history buff and self-professed fan of social commentary, Corwin cites “South Park’s” style of social commentary as one of his major influences. “Gaybraham” is not just a comedic spin on the alleged rumors surrounding Lincoln’s personal life, but also deals with the concept of gay rights and its parallels to the struggle for abolition. Corwin said his interest in history combined with his feelings about gay rights inspired him.

When the idea for “Gaybraham” came to mind, Corwin had just transferred from Boston University to the college when he was a sophomore. He said he was impressed by the college’s hands-on curriculum and encouraged by an atmosphere where he felt people were more passionately motivated to do what they loved. For Corwin, it was script writing. Determined to make a name for himself, Corwin sought out willing collaborators.

“I had no idea how to go about it at the beginning not knowing many people in theater or music or in general, really,” he said.

After numerous emails to people such as Bryan Roberts, associate dean of the Roy H. Park School of Communications, and other students previously involved in musical theater, Corwin said he finally came in contact with senior music composition major Jake Minter, who composed the music. Minter then contacted senior theater major Ella Carr, who is directing the musical.

Carr said she has experience in all things stage-related, and usually works on five different productions a semester.

Minter, having had previous experience writing for musicals, was drawn to the project after receiving an email through Whalen’s composition department. Carr said it was fairly easy for Minter and Corwin to collaborate on the production because both had a very similar sense of humor, understanding that “Gaybraham” was meant to be farcical.

Minter said the production faced many challenges, the first of which was finalizing the script. the The team’s main concern was whittling down Corwin’s script to a standard two-hour musical and crafting it for theater, as Corwin was more familiar with a television style writing. But Carr said he needed to adapt it to a more dialogue-focused style.

“We were trying to bring it from a film-style script to more of a stage-style script, and Ella definitely helped finish that process,” Minter said.

Inspired by Jason Robert Brown’s historically based musical “Parade,” Minter worked closely with Corwin, developing original songs based on the ideas Corwin had sent him.

“[Jared] would often write out this big set of lyrics that he originally wanted, then I would take those and keep somewhere between 10 to 30 percent of them because I would write the whole song out, and I would try to fit these lyrics in, and some of them fit in very well, some of them not as well as others,” Minter said.

After 10 months of weekly reading workshops with actors, the music began coming together. Corwin, Minter and Carr began testing out songs and gathering feedback through workshopping with other musical-theater students to get their input. Carr said casting went well in that the group found the actors it needed through a combination of open auditions and individual scouting.

“I think we really lucked out in finding a large-scale of talent … people who are devoted and really want to be part of the show,” she said.

But despite its humorous content, the trio insists “Gaybraham” is most importantly about the message.

“[Your] sexuality has nothing to do with the kind of person you are, [it] means just as much as how tall you are or the color of your skin,” Corwin said.

Carr said she thinks the shocking content of the narrative will simultaneously inform and entertain audiences.

“It’s a good ol’ riot that will get you thinking, but will also have you blushing,” she said.