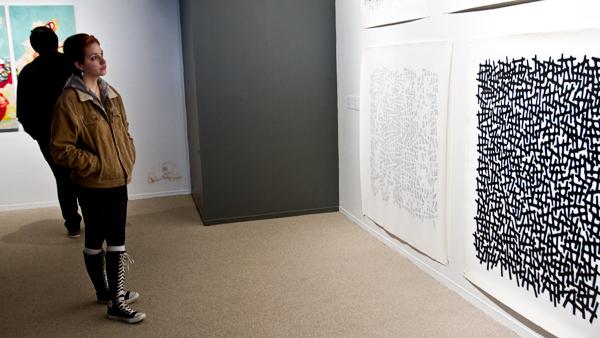 This colorful and hypnotic exhibit, which opened March 18, tantalizes the eye with art that explores where reality ends and art begins. All three artists dare viewers to investigate their understanding of the world through the appearance of objects rather than the objects themselves.

The exploration of subjective knowledge particularly applies to Warner’s paintings, which are offset against walls that have also been transformed into art pieces. Before the opening, Warner came into the gallery and, using pastels, drew images on the wall similar to those found in the framed paintings. This extra dimension of abstraction causes the framed paintings to transcend their immediate position in the space. The vibrant geometric objects, both in the paintings and on the walls, feel like characters playing within their designated spaces.

“The Explosion That Says Meow” exemplifies in both the title and the artwork how Warner stimulates the gray area between phenomenal and objective knowledge, as viewers are invited to use their imaginations. Warner’s painting creates nostalgic serenity, as the brightly colored shapes transform the same way clouds do to someone lying on his or her back in a field. Warner’s aesthetic seems unlike that of any abstract artist in the modern art realm.

Lesemann’s pieces study phenomena, as her cross-stitch paintings blur conventional tropes of still life and landscape. Feeling both spontaneous and methodical, Lesemann’s collection contains a few series of paintings, all reflecting and echoing one another. Lesemann’s “Landlocked” series incorporates variations of her painted cross-stitching. In certain lighting, viewers can see Lesemann’s painted, white cross-stitching, which provides a window into the artist’s process. The labor becomes the subject matter, which can also be seen in Lesemann’s “Untitled” series. Lesemann’s meticulous attention to detail in these pieces, along with a limited color-scheme and aquatic air, feels like the paintings of abstract artist Yayoi Kusama. The white webs bleed into their deep blue backdrop, literally blurring the lines between the subject and its contained space.

Zarem’s pieces are the most chaotic of the bunch. Each painting seems layered with different creative approaches, as if Zarem kept her rejected ideas in the painting rather than erasing them. Combining the controlled chaos of a Jackson Pollock with the brash energy of “Fear and Loathing in Las Vegas” illustrator Ralph Steadman, the pieces’ borderline messiness encompasses the artist’s creative process, inviting a spontaneity that viewers can relate to. The haphazard, almost unfinished nature of the paintings is comforting, as the artist draws upon the emotional ride that is the creative process. The painting “Pandora’s Wife” is splattered with brush strokes that evoke frustration and uncertainty, bringing into question what stimulates artistic intuition and when the artist knows a piece is complete.

Perhaps the only flaw of this exhibition is the volume of each artist’s individual perspective. Though Zarem, Lesemann and Warner all toy with phenomenal knowledge and the layers of abstraction, the vibrancy of each artist’s voice causes the exhibition to feel a bit daunting. The pieces are so separately thought-provoking and visually stunning that a collaborative collection creates a cacophony of perspectives. To truly enjoy “First Person, Twice Removed,” viewers must separately give each artist the time she deserves and then consider the exhibit as a whole.

“First Person, Twice Removed” is a meditative exhibit filled with whimsy, imagination and emotional honesty. The practices of these three artists create a mentally and aesthetically dazzling experience as they mediate between real and imagined life.

The exhibition runs through April 12, 2013. For more information, visit www.ithaca.edu/handwerker.