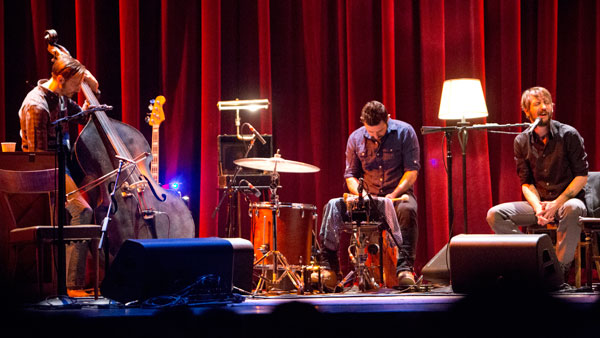 Matt Colgan/The Ithacan
Band of Horses take the stage Feb. 22 at the State Theatre of Ithaca for an unplugged performance. The group is currently on tour promoting their recent live album, "Acoustic at the Ryman."
By Tylor Colby — Staff Writer
Published: February 26, 2014

After a roaring applause, lead vocalist and songwriter Ben Bridwell steps softly onto The State Theatre of Ithaca’s stage, smiling in front of a collection of instruments, a floor lamp and a bottle of wine. The crowd goes completely silent while he quietly plucks away at a song, only to be joined minutes later by his fellow band members, lead guitarist Tyler Ramsey and multi-instrumentalist Ryan Monroe, as the three gather around a microphone, soothingly harmonizing with one another.

This stripped-down format set the easygoing pace for the rest of the concert by southern rock group Band of Horses, touring as an acoustic group to promote its latest live album, “Acoustic at the Ryman.”

The show demonstrated Band of Horses at its most modest. While the band’s normal setup is heavily based in electric guitar, this time it consisted of a double bass, piano, trap kit, assorted guitars, banjos and mandolins. But that did not mean the group was willing to sacrifice the anthemic quality of its music, playing such hits as “Laredo” with the excitement and intensity of their electric shows, all while the members were seated with their instruments.

For more toned-down, minimalist songs like “Neighbor,” the band members shifted from their individual seats to stand around one mic and sing and play their instruments. These portions provided a good change from the primary setup, breaking any potential monotony while also allowing the group to interact more comfortably with the audience.

At one point in the set, Monroe introduced the audience to his new mandolin that he had just purchased at local music store Ithaca Guitar Works, explaining that he had named the mandolin Grandpa. “Let’s see what you can do, Grandpa!” he said jokingly before launching into the next song. Grandpa followed through for a stellar tune, its warm plinking sounds adding to the texture of the other instruments.

At times, the band seemed to feel ill at ease with the acoustic format. Bridwell, sitting and singing occasionally without a guitar, often looked like he was ready to jump to his feet, his legs moving in spasms. Monroe, in ironic jest, would sometimes hold Grandpa while in a wide stance, sticking his tongue out in a flashy rock star pantomime. These behaviors only emboldened the band’s live performance, and the occasional jokes regarding the band’s slight discomfort with its unusual acoustic format made the performance more sincere and intimate.

“We’re full of cheery little numbers like that,” Bridwell said after a particularly upbeat tune before segueing into the equally cheerful “On My Way Back Home.” The setlist consisted mainly of uptempo major key songs, but the song choices seemed to be intentional, as many of the tunes provided an apt backdrop for improvised solos. Monroe’s twinkling piano playing and Ramsey’s surprisingly technical fingerpicking on the acoustic guitar were ear-pleasing highlights of the show, demonstrating that even without electric instruments, the band can still jam.

The band played most of its old hits, from “The Funeral” to “No One’s Gonna Love You,” with the same enthusiasm a listener would expect from a first-time performance of the tunes, even adjusting the songs into form-fitting arrangements that catered more to the live sound. But the best moment of the show came from an impromptu performance of “The Great Salt Lake,” brought on by numerous crowd requests to hear it. The song, normally a standard rock ’n’ roll ballad, was transformed by the acoustic setup into a blend of dramatic anthem rock and acoustic sentiment. The lyrical themes of rootsy hometown pride mixed with existential angst resonated well with the mostly college-aged audience.

The group played a lengthy set, clocking in at roughly an hour and a half, but maintained an excitement throughout that left the crowd wanting more. With the three-part harmonies never faltering and the sound never growing tired or bored, Band of Horses proved that it could pull off the acoustic guitar sound better than many others in the folk genre.