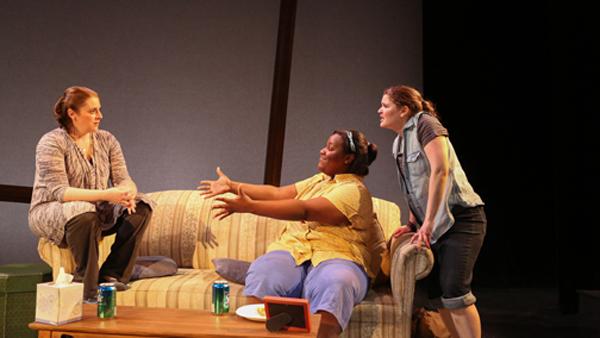 Kitchen Theatre Company’s production of “Crooked” by Catherine Trieschmann emphasizes how an intimate space and a small cast can be transformed to create a truly powerful experience. “Crooked” tells the story of 14-year-old Laney Waters (Molly Stoller) and her mother Elise (Erin Jerozal) as they move back to Elise’s hometown following the institutionalization of Laney’s father for a severe mental illness. Struggling with the physical pain of stress-induced dystonia, a disease that causes the back muscles to spasm, giving her a hunchbacked appearance, and the emotional pain of losing her father, Laney finds comfort in her writing and in her blossoming friendship with the fervently religious Maribel Purdy (Ally Poole). Though they have little in common besides their crippling loneliness, they soon become an inseparable, if dysfunctional, duo. “Crooked” follows the lives of these three characters as they face issues of religion, sexuality, discrimination and emotional vulnerability.

All three actors give remarkable performances for their debut at Kitchen Theatre. Stoller captures the energy of Laney aptly. She is lively, dramatic and exuberant in her performance. She makes strong character choices throughout the show. Her manifestation of Laney’s dystonia is convincing, and her bouncing energetic portrayal brings life and dynamism to the play. Jerozal’s Elise acts as a perfect counterbalance to Laney’s character. Sharp, witty and somewhat jaded by life, it is clear that Elise only wants what’s best for her daughter. She has a very realistic relationship with her daughter. While they fight constantly, there are also scenes that show a strong undercurrent of love flowing between the two characters. Maribel’s religiously earnest personality and talkativeness add a great deal of humor to the piece, as she babbles on about boys, Christianity and her invisible stigmata.

Though “Crooked” deals with many dark and serious topics, it is also full of humor that highlights the silliness of the teenage years. One such scene occurs after the agnostic Laney returns home from her first church service with Maribel. She excitedly and rebelliously declares she has become a “holiness lesbian.” Her mother, surprised and amused asks just exactly what a “holiness lesbian” is. Laney proudly explains, “I believe in the Holy Ghost, and I kiss girls.” She goes on to ponder that her life will be filled with struggle and strife, but it will make for excellent content in her memoirs. This over-the-top personality and eagerness to belong and be defined is characteristic of many teenage girls, and certainly of Laney herself. Her tendency toward the dramatic is also reflected in her writing, which the audience hears snippets of throughout the play.

The set is simple and remains constant throughout the play: a couch, an ottoman, a coffee table and a bench. This serves as the backdrop for the Waters’ home, Maribel’s church and the high school yard. While this could be confusing for the audience, the actors subtly and easily indicate where each scene is meant to take place. Perhaps the most striking piece of the set, and certainly the most symbolic, is the huge, over-sized and empty picture frame that hangs crookedly on the back wall throughout the play. Whether this is meant to represent the emptiness in the characters’ lives or the brokenness of the Waters’ family is left entirely to the audience’s imagination.

Trieschmann’s writing strikes a remarkable balance between comedy and drama. Realistic and emotionally driven, it draws viewers in and sweeps them along in a whirlwind of laughter and tears. She said one of her intentions in writing this piece was to involve more women in Broadway, which she accomplishes with her three-woman cast. But Trieschmann goes beyond the inclusion of women, creating a play that is universal in its appeal and the issues it grapples with.

“Crooked” will run at Kitchen Theatre through March 17. Tickets cost $15 to $34. There will be postshow talkbacks with the cast and director on March 8 and 15.