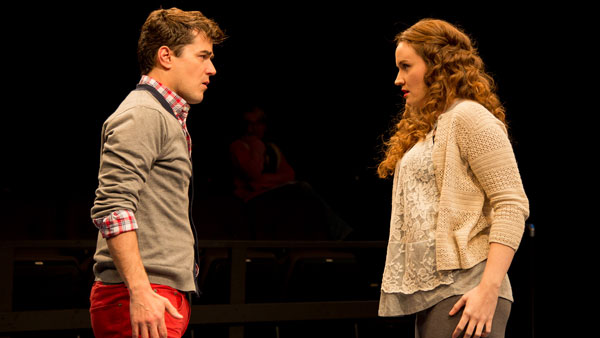 No costume changes. No set. No props. Just four actors on a slate-blue floor in street clothes. The Kitchen Theatre Company is known for bold, intimate performances, but in the regional premiere of Mike Bartlett’s “Cock,” the idea of “less is more” is taken to a new level. Full of vulgar language, this fast-paced comedy, directed by Margarett Perry, delivers 90 minutes of impressive acting exploring sexuality. Unfortunately, the minimal stage design, specifically the absence of props, causes the show to come off as more of a staged reading than a full production.

Despite his indecisive personality, John’s (Vince Gatton) personal opinion on women was something that he was always sure of: “Women are like water when you want beer.” But after putting his relationship with his boyfriend of seven years (Nick Hetherington) on hold, he is presented with the opportunity to take a plunge and change his opinion on men and women. To his surprise, he finds comfort and love in a 28-year-old, divorced, red-headed woman (Michelle Luz). Unfortunately, his new-found happiness throws him into a sexual identity crisis. After stringing along both of his lovers and “cocking things up,” John sits through an incredibly awkward dinner with his girlfriend, boyfriend and his boyfriend’s father (Daren Kelly) in hopes of finding out who he really is and what emotionally fulfills him.

Because the four actors are the show’s only elements, apart from the stage they perform on, it was imperative for them to go above and beyond to deliver a spectacular performance — and the company of “Cock” rose to the occasion. But in the end, it was Gatton who stole the show. The charming yet jittery chatterbox made it hard for audience members to take their eyes off him, with his excessive hand gestures and facial expressions keeping audiences giggling like school girls. At one point, John’s boyfriend is arguing with him about the status of their relationship. Unsure of what his next move should be, Gatton pursed his lips together in frustration, causing his face to turn beet red. Then, moments later, he groaned, threw himself on the floor and curled into the fetal position. The topic of sexual identity is indeed a sensitive one, but the comedic styles of Gatton and his fellow cast mates kept the play from being too heavy.

With nothing but the iron railings lining the seats in the arena-style theater, it is assumed the actors would work with each other more than usual. However, that isn’t the case. Apart from one scene where John cups his girlfriend’s face in his hands and gently presses his forehead against hers, there is zero physical interaction between the actors. This wouldn’t be a big deal, but according to the script, there should be physical contact. All four actors compensate for this absence by delivering the show’s seemingly non-stop dialogue with great emotion. But, despite their admirable attempts, the absence frequently leaves audience members scratching their heads.

For example, in a rather intimate scene, the audience “witnesses” John make love to his girlfriend. Not that having sex on stage would be expected — though it has been portrayed in shows like “Spring Awakening” — but the two have all of their clothes on, stand directly across from each other, and follow each other as they tiptoe around in a circle, gasping and moaning the entire time. On top of the abrupt and inconspicuous scene changes throughout the play, moments like these brought about unnecessary confusion.

According to John’s girlfriend, “In the end, it’s not about sexuality at all.” “Cock” is about identity, imparting the message that people aren’t defined by whether they’re gay or straight. Unfortunately, the delivery of the sentiment wasn’t as strong as it could have been. Props and costumes are aspects of theater that audiences take for granted, but when a show takes a minimalist stand and goes on without them, it causes confusion and makes the production seem incomplete.