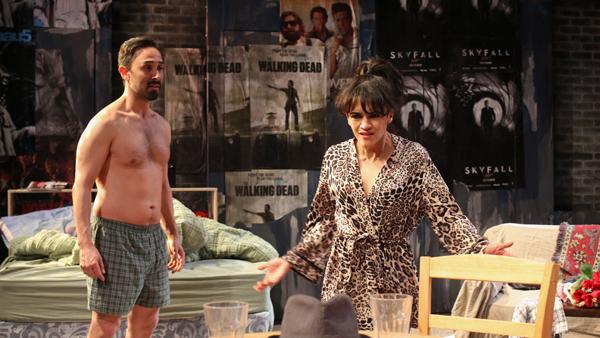 “The Motherf**ker with the Hat” is not a comfortable play. It does not allow the viewer to sit back and relax. Instead it grips the audience, acosting it with dynamic scenes of raw emotion. This play, written by Tony award-winning Stephen Adly Guirgis, tells a story of love and betrayal, as addiction and infidelity threaten to tear fragile relationships apart.

The story centers around a young man named Jackie (Vaneik Echeverria), a recovering alcoholic who is currently on parole after serving a 26-month sentence for unlawful possession of drugs. Though he’s had a very difficult past, Jackie is doing all he can to turn his life around. In the opening scene, the audience sees him rushing home to his girlfriend Veronica (Karina Arroyave), ecstatic with the news that he has found a job. He bursts into their small, messy apartment with pockets full of trinkets and gifts for his girl, including a “little bear that grips and shit.” Veronica is equally delighted, and all seems to be going well until Jackie notices an unfamiliar hat on the table. Furious and confused, he accuses Veronica of cheating on him with the “motherf—er with the hat that lives downstairs.” It’s all downhill from there. Jackie moves in with his AA sponsor Ralph D. (Brandon Morris) and his wife Victoria (Dina Ann Comolli), who are dealing with their own issues of infidelity and trust. As the play goes on, each character is shown to be deeply flawed and inextricably interconnected with the other characters in the show.

The strongest aspect of “The Motherf**ker with the Hat” is definitely the script. Guirgis’ writing is fast-paced, witty and emotional. While there is much crude humor and cursing in the show, it adds to the believability of the characters and the overall realism of the show. Perhaps the most intriguing aspect of Guirgis’ writing is his ability to take a simple, inconsequential or nonsensical phrase and fill it with depth and meaning through sheer repetition or emphasis. Of course, some credit must be given to the actors for picking up on these subtle cues and playing their parts with enough precision for the underlying meaning to be revealed.

The cast, formed entirely by members of the Actors’ Equity Association, was quite compelling, though authenticity varied from one character to the next. Perhaps Arroyave gave the most honest performance in her portrayal of the drug-addicted, short-tempered, yet passionate and fiery Veronica. David Anzuelo, who played Jackie’s cousin Julio, acted as a great comic relief to the otherwise dramatic piece. His larger-than-life character was not 100 percent believable, as his flamboyance seemed over-emphasized at times, but his sly quips, accidental slip-ups and earnest mannerisms more than made up for it. Echeverria’s Jackie acted as protagonist and antihero, but his frequent sobbing did not seem realistic. And while Comolli was mostly effective as Victoria, her New Yorker accent slipped often, taking away from the genuine feeling of the play. Morris gave a solid, if uninspiring, performance as the self-righteous Ralph, whose character is revealed to be just as bad, if not worse, than those he so harshly critiques.

The set, which was much more cluttered than usual for a Kitchen Theatre production, proved to be quite adaptable as the play shifted from Veronica’s apartment, to Ralph’s, to Julio’s and back again. Simple rearranging of a bed, couch, coffee table and dining table with chairs, along with the addition of a few small props, was enough to provide clear context for each scene. The lighting, designed by Ithaca College graduate Tyler Perry, added a great deal of mood to the scenes, aptly reflecting the action taking place on stage. The music, a mixture of funk and hip-hop, gave distinction to the production and added to the overall aesthetic quite nicely.

While the writing and acting in “The Motherf**ker with the Hat” was compelling, the play seemed to drag on longer than necessary. The constant state of conflict and angst the characters were in grew a little wearisome. Emotional and dynamic, “The Motherf**ker with the Hat” is a strong piece with several flaws, much like the characters it portrays.