Review: New exhibit goes above and beyond 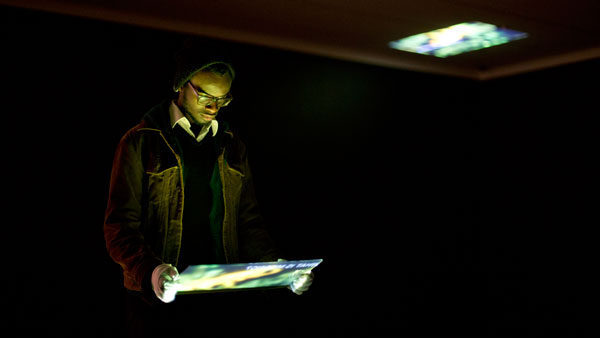 Tucker Mitchell/The Ithacan
Senior Andreas Jonathan holds an acrylic pane over a projector in Maya Lin’s “Empty Room.” This is one of many works in “Beyond Earth Art,” housed in Cornell University’s Herbert F. Johnson Museum of Art.
By Nina Varilla — Staff Writer
Published: February 11, 2014

Looming, industrial contraptions made from metal tanks, plastic tubes, glass bottles and rubber gloves greet visitors at the newest exhibit in Cornell University’s Johnson Museum of Art, “Beyond Earth Art.” These impractical devices are at the heart of Lucy and Jorge Orta’s multimedia installation, “Food-Water-Life,” a project featured within the exhibit that seeks to present conceptual solutions to global issues such as climate change and biodiversity. Though the Ortas’ water transportation devices are unfeasible from a true engineering standpoint, their whimsical nature prompts visitors to ambitiously imagine technology of the future.

“Beyond Earth Art” pays homage to Cornell University’s 1969 “Earth Art,” a collection of site-specific installations that was revolutionary for its time, with artists moving their workspaces from the studio directly to the exhibition space. “Beyond Earth Art” resembles its predecessor, particularly in its inclusion of “social sculpture,” or artwork that includes human activity and is meant to influence the restructuring of society or the environment. However, the exhibit represents a wide range of artists that employ different mediums in addition to sculpture. Featuring photography and large-scale murals as well as interactive installations and experimental video, the exhibit provides a diverse approach to its globally conscious theme.

Even within a specific medium are a variety of artistic subgenres. The exhibit’s photography collection includes work from documentary photographer Edward Burtynsky as well as Dionisio Gonzalez, who digitally combines real and imaged environments to create a commentary landscape. Gonzalez’ photograph “Halong X” features Vietnamese houseboats on Halong Bay, digitally juxtaposed against futuristic constructions. These saturated, almost comically, mismatched compositions will evoke queries about the impact of foreign commercial interests on developing nations and their impoverished communities.

Alongside its traditional two-dimensional artwork, “Beyond Earth Art” also features several multimedia installations ranging from time-delayed video footage to more hands-on experiences. Maya Lin’s “Empty Room” is an interactive installation meant to enlighten visitors on global habitat loss for animals. Patrons are invited to don a pair of white cloth gloves and hold a rectangular acrylic panel over the light beaming from the projectors installed within the room’s floor. Upon doing so, documentary footage and text comes into focus on the panel, prompting visitors to answer the question projected by Lin’s work: “What is missing?”

Another digital installation, “Flooded McDonald’s,” a film by art group SUPERFLEX, depicts the deliberate flooding of an abandoned fast food restaurant. Sandwiches sit in their paper wrappings under sickly yellow lights. Trays of food and drink bob around in the rising water with the perpetually smiling statue of the trademark red-haired clown, drifting on its fallen side. Acquired from staged footage of an ambitiously life-size replica of a typical McDonald’s chain store, this experimental video alludes to issues with the failings of capitalism and commercialism as well as the resulting climate change because of growth in fast-food industries.

However, the numerous sculptural objects dispersed among the other two-dimensional and digital media installations remain the exhibit’s standout pieces. In Mark Dion’s found object sculpture, “Trichechus manatus latirostris,” a tub-sized tar pit sits encased in glass with a plastic skeleton of a Pacific manatee. A hodgepodge collection of junk items is stuck in the dried black substance: broken teacups, a discarded lighter, metal rings and bottle caps. An unlabeled mass of rock and metal sits near the entrance of one floor’s installation. The decaying organisms reminiscent of coral and corroding metal pieces will captivate visitors with its odd beauty and chemical colors of rust, turquoise and yellow.

“Beyond Earth Art” is an intriguing exhibit with pleasantly surprising discoveries around every corner. Visitors will be imaginatively inspired by the quirkier installations, while more serious projects will prompt necessary reflection on the direction of human civilization and our inevitable impact on our global environment.