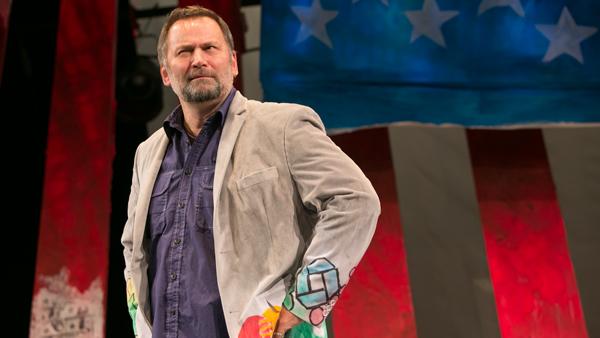 Courtesy of Ed Dittenhoefer
Brian Dykstra, HBO def poet and award-winning playwright, performs in his solo show “Brian Dykstra Selling Out” at the Kitchen Theatre. The show is written by Dykstra and explores the American condition.
By Lucy Walker — Staff Writer
Published: December 5, 2012

“Brian Dykstra Selling Out” is one quarter slam poetry, one quarter stand-up, one quarter acting exercises and one quarter the kind of explosive truth expected from a commission from the Kitchen Theatre Company. Written and performed solely by Brian Dykstra, this play is less of a traditional theater piece and more of an extended rant on anything and everything pertinent to money and modern life.

Dykstra, an HBO Def Poet, playwright and actor takes the stage for an extended monologue about the failure of money in modern society. He also touches on climate change deniers, the Supreme Court decision on Citizens United, the 2012 election, the Koch brothers, the financial meltdown, the widespread deception leading to the housing crisis, arts funding, Justice Roberts, former President George W. Bush, broken educational systems and much more. He also deviates for a long time near the end of the performance to recount a conversation with a friend about religion, artistic creativity and love, finally delivering his composition “An Atheist’s Love Poem.”

Boisterous, loud pre-show music, with all songs related thematically to money, is a rarity at the Kitchen Theatre, so the audience knows something different is going to happen. Dykstra performs his script as if he doesn’t know what’s coming next, occasionally adding in improvised moments as it suits the audience. He alternates in his observation of the fourth wall, sometimes debating with himself or performing right to one audience member. The most memorable moment is when, while ranting about Justice Roberts’ decisions, he bullies the audience into collectively yelling “fire” in the crowded, small Kitchen Theatre.

To get through Dykstra’s topics, director Margarett Perry organized the staging into different worlds. The meat of the show, his monologue, stays downstage in full lighting. When Dykstra performs as a slam poet, he goes to a lone microphone upstage and the lights fade as projections scroll over the set. In his out-of-body moments, he returns to one spot in the center, sitting or standing, as he transforms into someone else. His performance as a Somali “pirate” struggling to provide for his family despite overfished waters and U.S. government sanctions was transcendent, and the seamlessness of his transition back into ranting as himself was incredibly impressive.

Dykstra performs on a beautiful set by Kitchen regular David Arsenault, the lighting and sound designer. Arsenault created a flag with a red and white paint treatment on the floor downstage. Upstage, there are red wooden panels with a blue corner, through which his lighting design creates either a flag with white light or other locations with warped words and images projected over the wood. All of the panels feature small money details, appearing as if a torn flag reveals money under its seams. The playing space itself is sparsely decorated with some furniture, mostly just open space to allow Dykstra to roam around.

The best parts of his performance come when his overwhelmingly slanted, one-sided thoughts collide with undeniable truths. His claim that if corporations are people, poor citizens have less of a voice got murmurs of agreement from the audience. After totally declaiming the government’s bailouts of corporations rather than people following the financial meltdown, he reflects, “Who’s in jail?” Audible responses from the audience confirm this inescapable reality. Throughout this show, audience members clap, laugh, howl and scream back at Dykstra’s opinions. However, his beliefs are so liberal that it’s hard to imagine the production anywhere but in Ithaca.

Dykstra’s self-invented genre is not typical for a play, especially a one-man play, which usually revolves around one specific linear story, but he gets just as much across with less dialogue and fewer characters. Even if sometimes overwhelming or biased, “Brian Dykstra Selling Out” is a memorable performance, given the audience doesn’t feel the need to classify what they just saw.

“Brian Dykstra Selling Out” will run through Dec. 16 at the Kitchen Theatre.