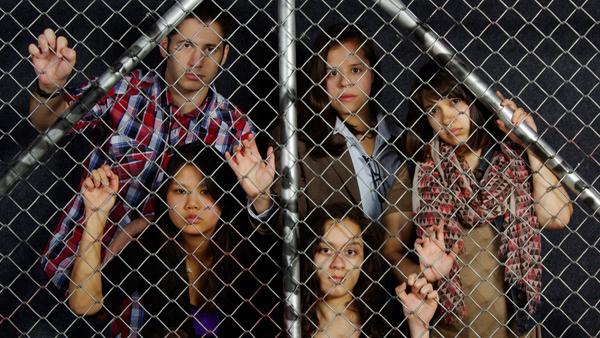 “Where is that accent from, sir?” This is one of the interrogating questions ushers dressed as border patrol officers ask audience members as they wait to pass inspection and enter the theater to see the Schwartz Center for the Performing Arts’ production of “Mother of Exiles.”

The theatrical performance begins at the ticket check, when members of the audience are interrogated by pseudo-border patrol, requesting each person show their ID, open their bags for the ushers to search and answer questions like, “Are you a Mexican?” When permitted to enter the theater, audience members cross into a high-security area cluttered with roadblocks, the bleachers blanketed in chain-link fencing topped with coils of barbed wire. Around the corner, a Mexican man in a cowboy hat sits in a re-creation of what appears to be his living room, saying “Hola” to gawking people as they take their seats.

The severe fluorescent lighting shines above the audience like those of a high-security prison. The border patrol warn audience members of the presence of a gun in the production, completely removing the fourth wall. Everyone is a suspect, anyone could be harmed, no one, not even the audience members, are safe.

“Mother of Exiles” takes place in a high school classroom in a desolate town on the Arizona-Mexico border. Six multicultural students find themselves at odds with their Princeton University alumna theater teacher, Ms. Andrews, played by Cornell University alumna Deanalís Resto, ’11. As they prepare for the rehearsal of Ms. Andrews’ play about civil liberty, students are told of the recent armament of the faculty, fueling tension in the classroom. The students quarrel with Ms. Andrews as they criticize her scripts, the school board’s and ultimately society’s lack of proper representation and protection of immigrant populations.

The play climaxes when school administrators take possession of a student-crafted manifesto and lock down the school. The manifesto reflects the ongoing debate in Ms. Andrews’ class, and the seven individuals begin an internal investigation for the culprit. Under added threats from her classmates, Ms. Andrews removes a handgun from her purse and remains a focal point of fear as the blame shifts from student to student.

From the very beginning, “Mother of Exiles” demonstrates multi-faceted elements, such as meta-theater. The plot unfolds in an auditorium, where high school students rehearse their play, which centers around the same motifs as the actual play, “Mother of Exiles.” The audience is compelled to experience the same anxiety and distrust among each other, just as the players in the performance do. One student, Lily, mentions in reference to playwright Anton Chekhov’s gun, if there is a rifle on stage, it has to go off or it wouldn’t be there. If the close-knit environment and increasing tensions weren’t enough, this ominous mention of inevitable gunfire creates white-knuckled suspense.

“Mother of Exiles” is a palpable dramatic dialogue on distrust, blame and identity beneath the umbrella of American liberty.

Despite the play requiring the students to fulfill a certain ethnic or racial archetype, the pulp of each character is fresh and distinctive. Student Adriana, played by Cornell University junior Liliana Aguirre Esparanza, begins as a quiet, background character but flourishes with colorful dimension when she reveals personal strife. Her heartfelt confession trivializes the anger and fear festering in the classroom.

As she criticizes the undervalued danger individuals in the border-states face, she undermines the gun’s threat and ultimately reveals an additional layer to the playwright’s criticism toward weaponry. Esparanza’s gut-wrenching delivery and shaking hands create a beautiful, unexpected performance within the play, one that comes and goes but resonates powerfully.

Perhaps a shortcoming of this performance is the presentation of flashbacks. Ms. Andrews’ identity struggles physically manifest as memories of her late father, Manuel (played by Ithaca College assistant professor Gustavo Licón). Though these moments are at times clearly distant memories, other times they take place presently in the classroom. This alternate reality creates a refreshing dichotomy between what is and is not being said, but is not clearly presented as the teacher’s inner thoughts. The flashbacks and the separate timelines become muddled, making it unclear whose mind the audience is peeking into, if anyone’s at all.

In light of the Sandy Hook tragedy, along with the topical issues of border patrol and the armament of teachers currently pressing the U.S., “Mother of Exiles” could not have been performed at a more appropriate time. This play gives both performers and audience members alike the chance to reflect on controversial matters in this poignant and fresh theatrical performance.