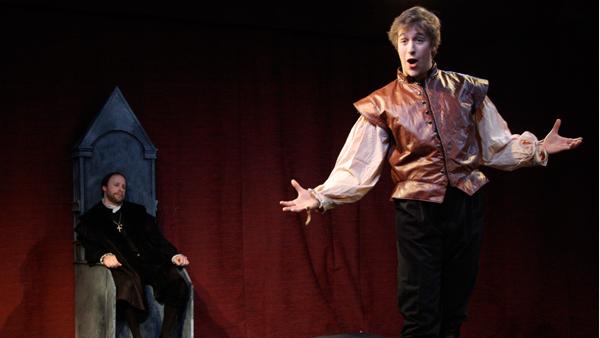 Kindness and cruelty become interchangeable in the Ithaca Shakespeare Company’s “The Merchant of Venice.” This indoor winter production of the trials of Shylock the Jew amid the aristocracy and merchants of Venice brings up ethical dilemmas still unsolved since its publication four centuries ago.

Shylock (Michael Donato), a Jewish moneylender, agrees to give Antonio (Matt Winberg), a merchant, a bond so he can support his friend Bassanio (John Triana) in his pursuit for the hand of Portia (Danielle Bates). Antonio agrees to Shylock’s demand for “a pound of flesh” as the punishment if he defaults on the loan. Meanwhile, Portia waits with her attendants, Nerissa (Rachel Fichter) and Lucia (Paige Anderson), as suitors arrive to try to solve the challenge left by her recently deceased father to win her hand. Amid all of this, Shylock’s daughter, Jessica (Kelly Fairbrother), plans to run away with Lorenzo (Lloyd Harris). He is a Christian as well as a friend of Antonio and Bassanio, so the risk for her if discovered is great.

The cast, mostly ISC regulars along with Ithaca College sophomores Fairbrother and Sam Adrain, brought this challenging play alive with their energy and dynamic acting. Most of the cast, especially Bates, delivered Shakespeare’s language beautifully, conveying both the meaning and the poetry.

The actors make the double-edged personalities of the aristocratic characters believable. With each other, they are kind and jovial, but with Shylock they are racist, cruel and unforgiving, constantly addressing him as “Jew” rather than his name. Bates executed such an incredible and entertaining transformation that it only took the audience a few minutes to realize her intentions. Her instincts are perfect as a young woman who tests her husband’s fealty, disguised as a male scholar.

Donato in particular is a standout as the “the villainous Jew.” He makes Shylock human and reasonable, both committed to his business ideals and guarded against a society prejudiced toward his religion. The showy speeches of Portia’s exotic, silly suitors, played by Dan Tubman and Scott Whitman, and the quarrels of Shylock’s servant Launcelot Gobbo (Bryan VanCampen) and his father Old Gobbo (Dave Dietrich) provide the much-needed comic relief in this otherwise heavy play. Their comedic timing is spot-on, assisted by their mastery of Shakespeare’s rhymes and riddles.

Director Stephen Ponton achieves no small victory in keeping the many interweaving plots of this 15-person cast clear, entertaining and piercing. He successfully finds the rhythm in Shakespeare’s words and the balance between comedy and drama.

The effect of double casting three of the actors was quite charming, echoing the original practices in Elizabethan times when actors played multiple roles in each play. Each character they played had a markedly different physicality and personality, distinguished by strong costume choices. The beautiful costumes, designed by Lauren Cowdery, distinguished the affluence, age and nationality of the characters. Shylock’s costume was a particularly stunning interpretation of a medieval Jew living in Southern Europe, complete with a yarmulke, layers of rich clothing and black tights.

The set, designed by AmArA, strove to follow the original Shakespearean style of keeping the stage mostly clear with a few strong set pieces to establish place. The bridge was a great touch, giving the actors height as they moved between the two primary playing spaces. The paint treatment created an authentic impression of stone. However, the pillars crowded the lower playing space and looked more like clunky cardboard than noble regalia.

This classic tale of loyalty, money and identity remains simultaneously amusing and philosophically challenging, even in the modern day. The ISC’s outstanding production of “The Merchant of Venice” whispers rather than screams — as theater should — to stay wary, but also hopeful, in any society riddled by assumptions, stereotypes and prejudice.