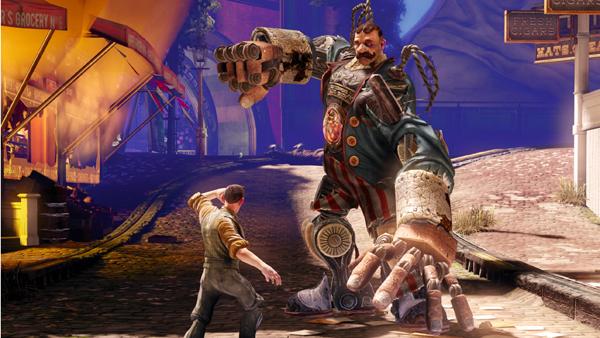 “BioShock,” released by Irrational Games in 2007, is considered by many to be the greatest game of all time. The action-horror first person shooter was hailed for its compelling gameplay, thought-provoking story and its fascinating setting in the underwater dystopia, Rapture. Its sequel, “BioShock 2,” didn’t achieve the same success, despite improved combat mechanics. “BioShock Infinite” is the third release of the franchise and must be marveled for its beautiful and varied setting, nearly flawless combat and an unforgettable story.

“Bioshock Infinite” is set in an alternate 1912, during which the protagonist, Booker DeWitt, must ascend the clouds to the flying city of Columbia. Tasked with finding a girl named Elizabeth to relieve himself of a debt, Booker travels through a myriad of locations in Columbia to find and escape the city with the girl.

“Infinite” has a legacy to live up to, and the original “BioShock” sets the bar higher than most game series. Those familiar with “BioShock” will see the similarities in “Infinite”: Both games are set in cities with distorted ideologies, both have the player fight with firearms and magic-like abilities and both host collectibles, such as recorded audio devices that flesh out the world and plot. Despite the number of similarities, “Infinite” manages to distinguish itself from being more than just another “BioShock” and stands up on its own feet.

The floating city of Columbia is a setting that is as beautiful as it is diverse. Players will explore the city through experiences such as the parades in its streets and the museums that embrace the corrupt ideals of the city. BioShock’s setting, Rapture, was fueled by ideas such as Objectivism, while Columbia is held afloat by ideals such as patriotism and American exceptionalism. American presidents are characterized as god-like figures, and minorities of the time are often portrayed as evil or deceitful figures by Columbia’s ruling body.

Combat in “Infinite” is intuitive and natural. Firearms are diverse in use and ability, and no two guns have the same feel to them. Players can become familiar and develop strategies using magic-like powers called “vigors.” The game gives up the series’ roots as an action-horror game and, despite the similar mechanics to “BioShock,” the switch in genre to a more action-oriented tone feels natural and unforced. For most of the game, Booker has Elizabeth to help him out both inside and outside combat. During battle, she will frequently give the player health and ammo and can even utilize power to open “tears” in the world to summon items and cover for the player. Best of all, Elizabeth fends for herself and is never a concern to protect in the midst of combat, a feature that all games should implement if they use non-playable character assistants.

The story of “Infinite” is mesmerizing, from the witty and clever dialogue presented right from the start to the voxophones that give life to the city and people of Columbia. Unlike previous “BioShock” games, the player isn’t a silent protagonist, and the relationship of Booker and Elizabeth compels the story and never allows a boring moment.

It is hard to find a complaint with the game. The soundtrack is perfect, from the hymn choruses inside church walls to the gramophones that give life to bars and buildings. Combat is balanced so players will have to be cautious with their resources to prevent death and is a consistent challenge without being irksome. Some important plot points are revealed or hinted at in optional and sometimes missed voxophones, but finding all the collectibles encourages exploration and makes the game’s ending click together brilliantly. “BioShock Infinite” is an outstanding game with an unparalleled story, setting and aesthetic, making it a revolutionary addition to both the video game and the art world.