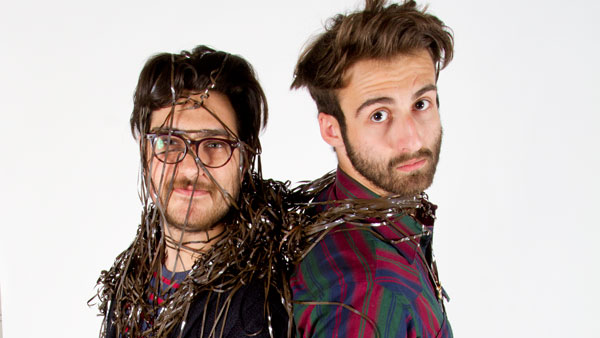 Senior Jon Samuels presses a flyer against a bulletin board, his palm flattening it to the cork. With a stab of a thumb tack, Samuels pins it down and then strolls away.

At a glance, a passerby may think the mostly white flyer is simply blank. However, some time before hanging the flyer, junior Andrew Hunter hastily doodled the artwork that adorns its surface. Upon closer inspection, the paper bears a disembodied face: It’s a male, sporting a bushy, scrawled mustache, the illustration looking much like a crazed sketch.

Among a block of text on the bottom of the flyer asks, “Where’s the Sweet Baby God tonight?” An email address below is the only clue to the sheet’s purpose — Sweet Baby God Records.

Behind this baffling advertisement is a budding project, driven by the joined creative minds of Samuels and Hunter. Sweet Baby God Records, frequently referred to as Sweet Baby God or Sweet Baby G., is their brainchild, an independent record label that puts an unorthodox spin on the typical business model. The label has opted to distribute its material purely through cassette tapes, choosing to deviate from the industry norms of distributing through CDs and non-physical, digital files.

While they may have opted for an “outdated” medium, Hunter and Samuels both admit getting material onto the tapes demands some patience. Original recordings are saved to just one cassette, known as the “master.” From this original recording, Hunter and Samuels copy the material, placing tape after tape into a cassette duplicator. However, despite the tedium of mixing onto cassette tapes, Hunter said he and Samuels appreciate the medium’s tangibility, something they believe is not typically provided to listeners in today’s more digital music marketplace.

Their pursuit for this physical experience began during this year’s South by Southwest music festival, held March 6–17 in Austin, Texas, which they attended together. During the event, they came across Boston rock band “Free Pizza,” signed to cassette-heavy label BUFU Records. The group was marketing its music through cassettes, and Hunter said he and Samuels were taken aback by the affordability of the tapes.

This brush with the realm of cassettes stuck with the pair, and Samuels said their interest in the medium bloomed before they were able to make their return trip back to Ithaca from the festival.

“On the ride back, [Hunter] had already looked up how much tapes cost,” Samuels said.

Now, almost a month since its inception, Sweet Baby God Records hasn’t waited to get the creative gears turning. The label has gained a name inspired by Ghanian painter Almighty God, who Hunter discovered while in Paris, and a signature black-and-white aesthetic that takes cues from the pair’s whimsically scrawled doodles.

With their label’s creative identity cemented, Samuels and Hunter said their mentality moving forward is not focused on facilitating their own creative pursuits, but rather giving others the opportunity to realize and distribute their own projects.

“We’re going through this mentality of capturing something that is already going on,” Samuels said. “We’re not creating as much as giving others the means to create and just throw it out.”

Hunter said he and Samuels get their creative gratification as they oversee what material goes through Sweet Baby God Records.

“Where Jon and I come in, where we exert our creative drive, is through what gets put out there,” Hunter said. “For me, having that sort of business, that is my creative outlet.”

Samuels and Hunter take a notably free-form approach to the regulation of material that passes through their label. Samuels said they don’t have any criteria except that artists approach the music they produce with honesty, regardless of genre or craft.

“That’s the big thing — being genuine, being totally honest, but most importantly being honest with yourself, and it will show in what you produce,” he said.

One musician who has signed on with Sweet Baby God Records is senior Jack Simons, who caught the label’s creative fever and said the freedom of expression that Hunter and Samuels exhibit is encouraging and makes their label contagious.

“I feel like Sweet Baby G. provides an opportunity for people to basically put their ideas out there regardless of any sort of parameters,” Simons said. “I feel like that’s the appeal of it.”

Simons, a multi-instrumentalist and member of rock band Unicorn Harvest, plans to produce on the label and said he hopes to churn out some “intergalactic, forward thinking, progressive music” through Sweet Baby God Records.

Simons hasn’t been the only one drawn in by Sweet Baby God Records’ approach. Senior Ryan Metz also signed on with the label as a means to distribute music he is writing for the ICTV program “On the Air,” for which he is the musical director. A bassist and self-titled “wannabe vocalist,” Metz said he immediately saw potential to further this musical pursuit when approached by Samuels to produce a tape.

“As soon as [Samuels] approached me and asked, ‘Hey, do you want to release a tape with us?’ I said, ‘Of course,’” Metz said. “‘I have this project that I’m working on now, and that’d be a great way for me to get some exposure.’”

Above all, Metz said he believes the emphasis on authenticity will attract more creative artists as time goes on.

“I think that’s what people are looking more and more for these days,” Metz said. “They just really want something that’s genuine and tangible and real — that they put their whole self into. So, I think that’s probably going to be attractive to listeners, and musicians especially.”

The two said they plan to stay in Ithaca over the summer to continue nurturing the label, namely finding a home base for the two to record and produce in. Hunter and Samuels are pursuing all opportunities for the label to expand, even considering more obscure ventures, such as recordings of Samuel’s grandmother reciting bible stories, realms worth exploring. As long as there is an interest in cassette tapes, Hunter said he sees nothing standing in the label’s­ way.

“Anything can be meaningful to anybody,” Hunter said, “It’s a matter of people deciding that tapes are a right medium and if they want to get things out through them. And there’s nothing stopping us.”