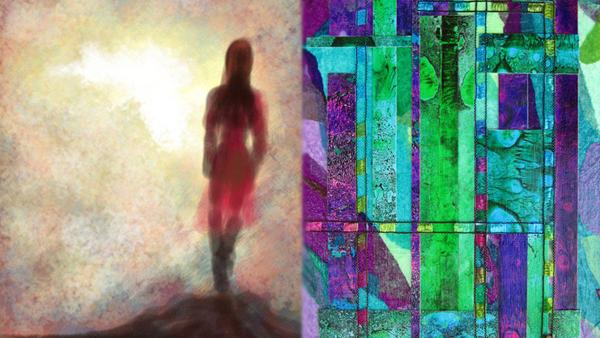 Ithaca College hosted a new kind of music recital with the production “Written in My Heart,” a program that rewrote the typical opera concert by combining opera, literature, art and interactive technology Monday.

Organized by Dawn Pierce, assistant professor of performance studies, and Metropolitan Opera member Emily Newton, “Written in My Heart” was the first traditional form of an opera recital at the college with a creative spin. Pierce and Newton not only performed arias but also invited the audience to take part in the performance.

Pierce and Newton began by including selected quotes from famous literary figures.

The decision to use quotes in the program correlated directly with the idea of featuring videos. Up until Oct. 1, Pierce, Newton and Cass Barbour, video and broadcast technician, accepted submissions of filmed portrayals of the quote. Anyone could submit a video, and the content was open for interpretation. The only requirement was the recitation of the quote.

For example, one clip could have included someone walking through a trail and the accompanying narration of Kahlil Gibran’s words, “And when the Earth shall claim your limbs, then shall you truly dance.”

The quotes were also an integral part of the interactive aspect of the program. At the beginning of the recital, the quotes were displayed before the audience. They were then asked to respond with a word using some form of technology, such as an iPad or smartphone. Once submitted to a designated website, the word was projected onto a screen and remained as a part of the production.

“I feel like the community is going to be just as much a part of the performance as our work in the performance, because they’re going to make decisions, and then by submitting these videos they are going to have a voice in it,” said Pierce.

The video portion of the program followed the audience’s word submission and preceded the music. Before an aria was performed, the audience viewed a video featuring the corresponding quote, and this pattern continued until the first half of the performance was over and the second portion of the audience participation began.

During the intermission, the audience was asked to vote on artwork. There were three to four selections of original artwork for each quotation, and the audience chose their favorite visual representation of the quote. The piece with the most votes was portrayed on a screen during the second half of the production.

Hillary Robbins, a vocal student of Pierce, attended the recital and enjoyed the interactive aspect of the performance.

“It was interesting seeing music I know interpreted with technology,” Robbins said.

The goal behind the recital’s reconstruction was to help lessen the intimidating density of the music. The music included composers such as Jules Massenet, Giuseppe Verdi, Giacomo Puccini and Engelbert Humperdinck. Pierce worried their works could appear overwhelming to someone unaccustomed to opera.

“I wanted to do something to make the program more accessible because the repertoire we’re singing in this program is really heavy,” said Pierce. “It’s Verdi, and it’s heavy operatic literature that maybe, to someone who doesn’t know opera, might feel intimidating.”

To remove any uncertainty over the content of the music, quotes such as one from Elizabeth Barrett Browning’s poem “How Do I Love Thee” offer insight into opaque operatic arias. Newton chose this selection to portray romance.

“It does such a good job encapsulating that kind of overwhelming feeling of love in a short poem,” said Newton.

The artwork portion of the recital was also meant to translate the tone of the music to an audience that might not entirely understand the content. Newton explained opera as a deep expression of emotion, and art can be used as a tool to visually represent the feeling.

“Art comes from the same place [as opera],” Newton said. “It’s another one of those heartfelt emotions or feelings that you are unable to express just with mere words.”

By introducing the quotes and including the artwork, Pierce and Newton hoped to help translate of the story. In one piece, Newton sang as Lady Macbeth, and the quote accompanying the music was Thomas Otway’s words about the power of ambition and helped translate the depth of her character.

“As an audience member, it made me think and interpret the music more than if I just sat and listened,” Robbins said.

With all the help the innovative production offers, the audience was able to gain insight into beautiful but complicated music an audience otherwise might not entirely understand.

“I hope it [gave] people a more intimate experience of the music,” said Newton.