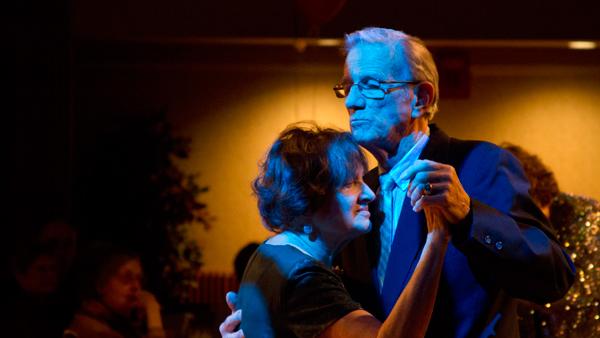 Jerome Van Buren had never been to a prom before Monday night, when he attended the first Tompkins County Senior Citizen Prom, which was held in Emerson Suites.

Van Buren, 86, who grew up in Queens, N.Y., never attended his high school prom, because the commute was too far. It was at least a half-hour from his house.

Because he never attended a prom, Van Buren had neither been prom king nor had he ever expected to be presented the honor. But at the end of the Tompkins County Senior Citizen Prom, Mayor Svante Myrick gave him his crown.

“Jerry, Jerry, Jerry,” the crowd chanted as Van Buren walked toward the stage and Myrick placed the ill-fitting red and gold crown on his head.

The two stood on the hardwood floor of Emerson Suites as “Twist and Shout” began playing. Pfann was trying to hold her tiara on her head while Van Buren, having given up trying to keep his crown from falling, held his crown in his hand. Soon, wheelchairs and walkers joined them on the dance floor as everyone began clapping to the beat.

“Believe it or not, I was queen of my high school prom,” she said.

Dressed in a red blazer, Pfann had come to the senior citizen prom with George Pfann, her husband of 50 years. Both of them grew up in Ithaca, where they met. There were moments when Lana and George were unsure if they could even go to the prom.

“We haven’t been dancing for a while, because my back had been giving me problems,” she said.

Van Buren and Lana and George Pfann were three of the 75 senior citizens who attended the prom. The event was sponsored by Project Generations, an Ithaca College club with 25 members. Each member is paired with a senior citizen in the Ithaca community, and the volunteers visit with their senior buddies on a weekly basis.

Because the club’s members only interact with their senior partners, junior Sarah Parker, the club’s community outreach coordinator, said this was an opportunity for the volunteers and seniors to meet each other as well as others in the community.

“With our organization, it can easily become a volunteering thing where you don’t come together as an organization,” Parker said.

The idea for the event came from junior Mary Claire Hartford, the club’s co-president, who was part of a similar event sponsored by her high school’s National Honor Society in Washingtonville, N.Y. Hartford brought 150 people to their first senior citizen prom there.

“I just thought, ‘Ithaca is such a great community, why not bring it here?’” she said. “We got a lot of people out and dancing.”

Dressing up and dancing drew many senior citizens to the event. Ginny Carol, 71, had her outfit picked out for almost a month, a floor-length, velvet, burgundy-red dress with a V-neck, which complemented a necklace and pearl earrings.

Carol, who receives weekly visits from Parker as part of Project Generation’s program, said she was looking forward to spending more time with Sarah and meeting new people.

“I told Sarah to find me someone who has a little bit of money, a little older, available, will take me out to dinner and dancing,” she said.

Meanwhile, Van Buren, who lost track of the number of dances he did throughout the evening, was contemplating how to explain his sash and crown to his wife of 61 years back home.

“She’ll ask me all about it,” Van Buren said. “I’ll tell her exactly what happened. That’s the only way to do it.”