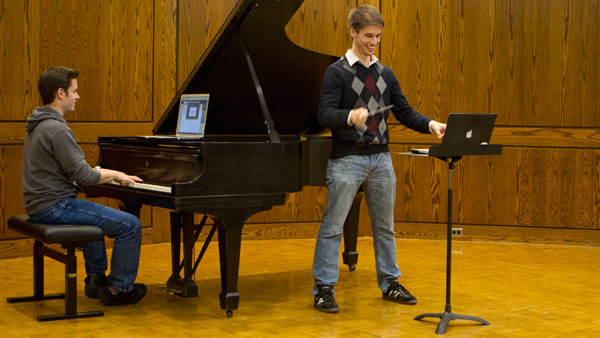 For the amateur musician, the Internet is the premier venue to distribute tracks, make connections and gain publicity. Websites such as SoundCloud and Bandcamp have proven effective in bringing a budding artist’s music to the surface and cultivating a creative community between thousands of musicians.

The pair has created Composer HQ, a national network limited to amateur composers at colleges and universities, with the hopes of creating a community of collegiate songsmiths. The site, which will be exclusively available to college students when it launches, will allow members to upload their compositions to the website. Unlike sites such as SoundCloud, the users will upload actual scores rather than audio files. Then, through forums and commenting on the website, members will be able to critique and discuss submitted works with other talents all over the globe.

Condon said the project was a product of the duo’s desire as composers themselves.

“We’re in the dining hall one day in our freshman year, and we’re just like, ‘Gee, you know, if there was only a website out there that gave college composers such as ourselves a place where we could go,’” Condon said.

Since then, Van De Water and Condon have been proactive in turning their idea into a reality, nurturing the venture with a series of monetary awards. Their project placed fourth for their category in the Ithaca College Business Idea Competition in 2012, where it won $400. Subsequently, Van De Water and Condon were awarded an additional $5,000 after winning the Creative Core Business Competition in March of 2012 in Syracuse, N.Y. Van De Water said the competition was pivotal in bringing the project into reality.

“Having somewhere to really flesh out the ideas and work on them in an environment where we have people who are able to advise us and guide our decision-making process [solidified it],” he said. “For me, that was where it started to become real.”

Now, as the Web designers continue building the website, the pair is contagiously enthusiastic. Van De Water and Condon, who recruited graphic designers at Scope Design in Corning, N.Y., for the tech side of its project, are making sure every dimension of the site is handled with an awareness to the audience. The duo’s attentive approach is evident in the origin of the project’s name.

“There is an emphasis on the composer,” Condon said. “And just in the sense of the name headquarters … the central location where people want to go, that kind of asserts itself just by the name.”

Tom Schryver, one of four advisers to Composer HQ and temporary contest administrator in the School of Business, said the pair’s passion toward the project has set it apart from other startups.

“One of the things that really impressed me about Josh and Ben is that they were very systematic and rhythmic, and just really diligent about continuing to move the idea forward,” Schryver said. “Slowly, every single week they were always working on it. They were always doing something.”

Ultimately, the pair doesn’t see its final product being a social network, such as Facebook or MySpace. Condon said, while the website may be dubbed as one, he hopes it will be seen as a professional networking tool above all else.

“We want it to be a place where people go to promote themselves and network with other people,” he said.

As of now, Composer HQ is not accessible to the public. A quick search online will bring users to a welcome page. Though this is temporary, Condon and Van De Water said they plan to begin beta testing in the near future and hope to launch in full before their graduation in May. While the pair continues working on the project, Schryver said he is excited about the launch.

“This is an underserved market, and they may find after they launch that there are other opportunities to serve this market that they haven’t thought about yet — that nobody has thought about yet,” Schryver said. “I’m really excited to see what that is.”