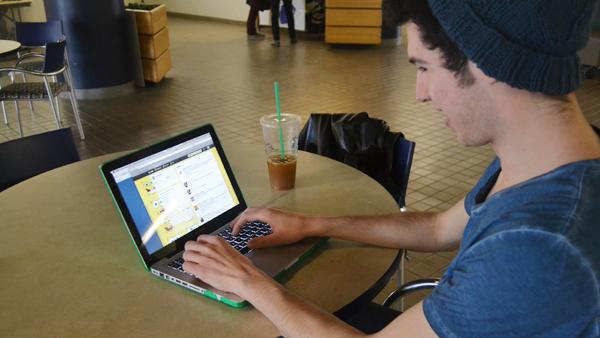 Who lives in a pineapple under the sea? The absorbent, yellow and porous SpongeBob SquarePants, of course. Quotes from him and his underwater friends are propelling sophomore Peter Marshall’s “SpongeBob”-themed Twitter page, FoxyGrandpa62, to success with thousands of followers.

Marshall and his friend Tori Mueller a senior at Harriton High School in Rosemont, Penn., where Marshall also attended, created the Twitter page in 2011. As of Tuesday, the page has garnered 29,198 followers.

Marshall and Mueller said they decided to create it because of their mutual love of “SpongeBob” and their habit of constantly quoting the characters, but they never expected that a page with simple “SpongeBob” quotes would become such a success.

“We just annoyed so many people in high school quoting “SpongeBob” out loud that we decided to basically stop and just do a Twitter instead,” Mueller said. “We just sort of wanted to share the ‘SpongeBob’ love, because there are so many people out there who love ‘SpongeBob.’”

The two searched Twitter for a page similar to their idea, and after finding none, they decided to officially create the first “SpongeBob” quote Twitter page.

The name FoxyGrandpa62 is a “SpongeBob” reference on its own. Mueller said it is pulled from an episode called “One Krab’s Trash,” in which Mr. Krabs sells SpongeBob a cheap drink hat — basically a baseball hat with two soda cups on the side with straws coming down from them for easy drink access — only to realize it is a hot commodity and he could get a lot of money for it. In an effort to get the hat back, Mr. Krabs tries to bribe SpongeBob with a baseball cap that says “Foxy Grandpa.”

Coming up with quotes, which they tweet at least once a day, is something Mueller has a knack for, Marshall said. He said they usually correlate the quotes to things happening to them in their daily lives.

“A lot of times if it fits with something that’s going on in my day or something that happened to me, I’ll do it, and it might not mean anything to anyone else, but it does to me,” Marshall said.

Marshall and Mueller tweet quotes in the morning to greet the followers. A tweet on Tuesday greeted followers with “Good MORNING krusty krew!!” It was retweeted 122 times and favorited 27 times. However, when a series of quotes are tweeted out, they receive an even bigger response. On Sunday, the pair tweeted a group of quotes from the episode “Band Geeks” that achieved at least 250 retweets each. “YEAH, FOR THE FIREMEN!!!!!!!”

Marshall said the Twitter has gained so much popularity because college students today watched “SpongeBob” when they were younger.

“So many people grew up watching it, and it’s been such a prominent part of a lot of our lives,” he said.

Initially, only Marshall and Mueller’s friends followed the page, but as it grew in the first few months, many more friends of friends and even strangers began to follow it. When Marshall came to Ithaca College, he befriended one of FoxyGrandpa62’s followers, junior Tiara Kanney, without even knowing it.

Kanney said she became aware of the page after seeing a friend retweet one of FoxyGrandpa62’s tweets. As a die-hard “SpongeBob” fan, she said she immediately followed the page.

“It’s really hilarious, and it’s a very niche Twitter page,” Kanney said. “Only people that have a serious interest in watching “SpongeBob” will get all the references, and so it’s just really funny, and it’s stuff that you watch the episode and you know, but it’s hilarious to see it again repeated randomly.”

Marshall said the Twitter only began really taking off in the past few months. He attributes this success to a snowball effect, where people following and retweeting easily make other Twitter users aware of the page. While Marshall does not consider Mueller and himself Twitter celebrities exactly, Mueller said they are surprised and ecstatic with their popularity.

“It’s just a great place to go and remember all the old ‘SpongeBob’ quotes,” Mueller said. “I didn’t think it would become a huge thing when we started. It’s really awesome knowing there are, like, 29,000 people out there who follow me and Peter. It’s crazy.”