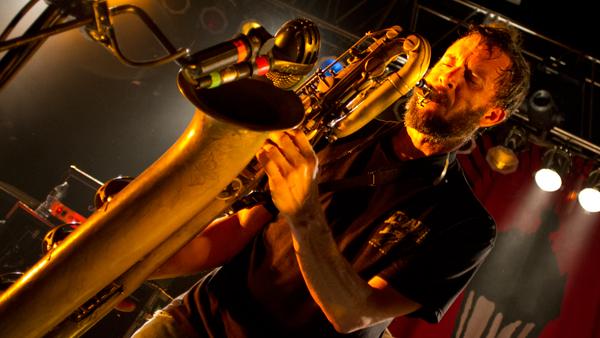 As the lights dim and the seven members of Streetlight Manifesto walk onstage, Emerson Suites fills with rapturous applause. The crowd surges forward, hands in the air, anticipating the band’s first notes. Seconds pass, tension reaches a fever pitch and the cheering does not waver.

Then, suddenly, a trumpet blares. The crowd explodes into commotion. A glance to either side reveals the grinning mugs of the more than 700 spectators, most of which will prove to be in constant motion for the rest of the show.

This was Streetlight Manifesto’s performance, which took place Friday at Ithaca College. It was a public concert hosted by the Ithaca Bureau of Concerts.

Streetlight Manifesto is one of the most largely recognized bands within the American Ska genre, having been around a decade. The band has earned its prestige with its energetic stage presence and eclectic array of sounds. The band meshes trumpets, saxophones and trombones with aggressive drums and charismatic vocals, delivering a signature sound that can only be described as “Streetlight.”

Freshman Jon Yoskin, who attended the concert, said the band’s energy and creativity is what sets it apart from others.

“The energy of their music, how they incorporate brass into it, that’s such a unique sound,” Yoskin said.

It would seem the band’s vigor is contagious. As “Forty Days,” off the album “Somewhere in the Between,” opened the show, what ensued could be best described as a coordinated seizure — in but a few brief seconds, the mass of onlookers erupted into a showcase of joyous disarray. Bodies bumped bodies, while others passed overhead, surfing the crowd. In the center of the crowd, fans “skanked,” a style of dance that is commonplace at ska shows. It fuses running in place with chaotic flailing, alternating arms and legs forward and back. The dancers ultimately form a circle in the crowd. What results is an explosion of spirit that leaves audience members constantly in motion.

With such an uproarious display, the churning throng of fans initially daunted some concertgoers, who did not expect such a riotous occasion. This being said, the crowd never took a violent air — the attitude was quite the opposite. Any attendee who may have lost their footing in the foray was swiftly lifted to their feet by a huddle of caring fans. It’s an attitude that freshman Dani Pasquarelli said she appreciated.

“Everyone would look out for people like me,” Pasquarelli said. “Everyone was going crazy and having fun, but everyone was still protective of everyone else.”

Even when the music ceased, the concert’s vivacity never wavered. In reality, the lulls in between songs proved to be just as enjoyable as the music, thanks to the charisma Streetlight Manifesto exuded on stage. Tomas Kalnoky, the band’s lead singer and guitarist, frequently addressed onlookers with familiarity, cracking jokes and reaching out to the crowd. With these instances, the entire affair was communicative and personal, and positive atmosphere pervaded the entire set.

Roughly halfway through the set, Kalnoky asked the crowd, “Who wants to hear one more song?” The question was answered with uncertain applause, as if the entire crowd collectively thought, “There’s no way this could be it.”

“Who wants to hear seven more songs?” he asked.

When playing, the band was animated. During the song “Moment of Violence,” the band was especially vibrant, moving with the music and visibly enjoying every moment of the performance. There was a certain satisfaction fans got from watching the band play — the members’ passion was palpable. Freshman Angela Asala, who said she took pride in securing a spot for herself at the front of the mob, said the band’s passion was on display.

“Everything was just so there,” Asala said. “You could just tell that everything, [the band members] were just completely in it.”

This show came just before the beginning of Streetlight Manifesto’s End of the Beginning tour, which officially begins April 25 in Paris, France. Once the tour concludes at the end of the year, the band will cease being a full-time touring band, a title it has held for a decade. However, even at the end of its touring era, it’s apparent the members have not even slightly lost their touch.

The tracks “Watch it Crash” and “A Better Place, A Better Time” were particularly momentous, drawing some of the biggest cheers of the night. All the performances were astonishingly tight, and every song in the set was placed perfectly within the set list. Streetlight seamlessly transitioned between each track, producing a fluid listening experience and making sure the crowd’s vitality never slumped. The group’s famous track “Keasby Nights” made an appearance, satisfying the crowd’s craving for fan favorites.

In terms of sound, a decade of touring has by no means hindered the group. Simply put, each aspect of the band — vocals, drums, guitar, brass and bass — sounded practically in-studio. It’s an astonishing feat, considering the rapidity and complexity of the music, but the members of the band did it effortlessly.

Sadly, as with any concert experience, the show eventually had to end. The band delayed its departure with an encore, leaving Emerson Suites in the wake of its send-off song, “The Big Sleep.” However, the roughly 90-minute set did leave a bit to be desired and left some wondering why the group did not round up to the two-hour mark.

That being said, there was no doubt the concert was a rousing time. The vibrant display from fans and band members will keep attendees reminiscing long after over “that one time Streetlight came to Ithaca College.” Asala was one of the many who left satisfied with the band’s performance, praising it with a stream of select adjectives.

“It was the most incredible, sweaty, loud, awesome experience of my life,” she said.

Tour dates for Streetlight Manifesto’s End of the Beginning Tour are available at www.streetlightmanifesto.com.