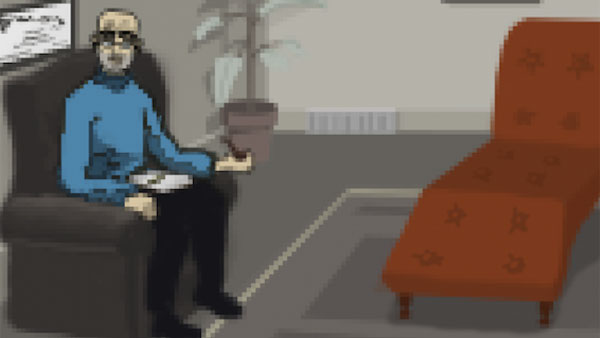 Courtesy of IC Game Developers
In "Rorschach," a video game created by IC Game Developers Club, the player acts as a patient of mad psychiatrist Dr. Rory Schach. The graphics of the game are in a 16-bit style.
By Tylor Colby — Staff Writer
Published: April 23, 2014

Thousands of individuals around the world seek weekly therapy for their mental health, receiving treatment from many professional psychologists. When the psychiatrist in question is really the crazy one, however, matters may get more volatile.

In “Rorschach,” a game developed by members of the Ithaca College Game Developers Club, the player takes on the role of a psychiatric patient of maddened Dr. Rory Schach, who administers Rorschach tests to determine the player’s sanity. In retro 16-bit graphics, the player must fill in one side of the inkblot, attempting to mirror it perfectly. As an added bonus, the player must also provide a brief description of what the inkblot looks like, and those answers get jumbled into a wacky fill-in-the-blank report from the doctor himself.

The “Rorschach” developers recently submitted their game to Steam Greenlight in hopes of getting the required number of votes necessary to be featured on Steam, a digital distribution, rights management, multiplayer and communications platform developed by Valve Corporation. The game’s inception was at the fifth annual Global Game Jam, a 48-hour long international competition, this year hosted at Ithaca College from Jan. 24–26. Every year, the Global Game Jam organization announces a different abstract theme on which each team must base its creation during the competition to develop the best video game in the allotted time. This year’s theme was “We don’t see things as they are, we see them as we are.”

The team ultimately came up with a puzzle game based on inkblot tests from the Freudian era of psychology. Wareham said the ambiguity of diagnosis is what the developer’s came up with in response to the GGJ theme. By framing their game around goofy misinterpretations of inkblot tests, Wareham said they still kept in sync with the GGJ theme but with a lighthearted spin.

“The game is supposed to be about this psychiatrist who is quirky and strange and doesn’t really know what he’s doing,” Wareham said. “So it’s supposed to be funny. And at the very end, he gives you this very messed up diagnosis that has nothing to do with psychiatry or psychology at all.”

Freshman James Smith, the game’s sound effects designer, said being bound by the GGJ theme in a short time span forces the participants to work swiftly and innovatively.

“It’s not necessarily a competition,” Smith said. “It’s a challenge for us to see what we can produce in 48 hours. It takes a lot of resources, you really have to think through what you’re doing and pull something really cool together.”

Unwilling to let the unfinished project go by the wayside, the developers are now working on improvements to “Rorschach” before disseminating the game to the public and onto major international game sharing networks within a year.

The team lineup has varied since the game’s inception at Global Game Jam, but currently consists of seniors Alex Wolf, Will Gelder and Jon Pierre Heroux; juniors Bill Rufkahr and Kate Wareham; and freshmen Jordan Kolb and Smith. Wareham, the game’s art designer and president of the IC Game Developers Club, said their game’s unexpected success led the team to return to “Rorschach.”

“It started off as just a short game to make in a weekend, and then we liked it enough that we decided to go back to it,” Wareham said. “During that time, it actually made the top 20 in Indie Statik’s highlights for the Global Game Jam. So we thought this is well-liked enough that we can take this a little bit further.”

In recent years, independent video game developers have earned more attention and recognition by the gaming community, partly because of the increased accessibility they have achieved through the presence of online game stores such as Steam. Steam Greenlight accepts indie games for potential later submission. The games are voted on by other Steam members, determining whether or not that game will make it onto the site’s database of downloadable content.

Heroux, the team’s project manager, said this game is the biggest project he has ever worked on with the club and attributes its success to everyone’s participation in a game developing festival outside their usual school-related responsibilities.

“We always come up with great ideas, work and work and sometimes fall short of our goals,” Heroux said. “[Global] Game Jam allows us to say to ourselves, ‘Life can be set aside for this 48 hours, and in that time what can we do?’”