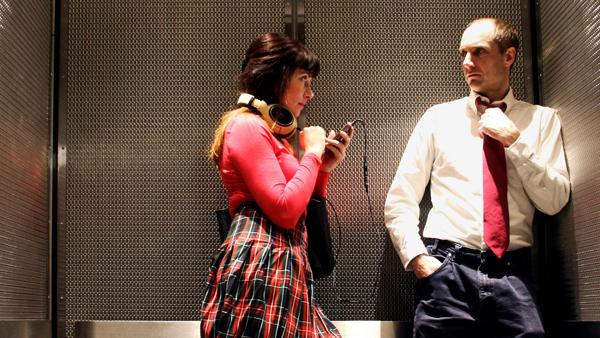 Wendy Houseworth/The Readers' Theatre
From left, Darcy Jo Martin and Tim Perry star in The Readers’ Theatre’s production of “Oleanna.” The three-act play surrounds a college student who accuses her professor of sexual harassment after an encounter in his office. The play will run from Feb. 22-24.
By Evin Billington — Staff Writer
Published: February 13, 2013

When students visit professors in their offices to talk about their grades, it usually results in a simple discussion about the student’s performance in class. However, in David Mamet’s play “Oleanna,” this seemingly harmless action sparks life-altering problems for both the professor and the student.

From Feb. 22 to Feb. 24, the Readers’ Theatre will perform a production of “Oleanna,” directed by Anne Marie Cummings, at The Black Box at Lehman Alternative Community School on Chestnut Street. Tim Perry and Darcy Jo Martin will be playing the two sole roles of John, the college professor, and Carol, the student, respectively.

The play was written during the Clarence Thomas–Anita Hill controversy, which surrounded Hill’s accusation of sexual harassment against Thomas, a U.S. Supreme Court nominee. “Oleanna” is three acts long and set entirely in John’s small office. John is about to be granted tenure and is in the process of buying a new house for himself and his family. Carol goes to his office with complaints about her grade and her general lack of understanding in his class, despite the fact that she has attended all the lectures and has done the required reading. It is revealed that following their conversation, Carol goes to the tenure board and complains John is sexist and had sexually harassed her by touching her shoulder during their meeting. Carol’s accusations grow more and more serious, and John’s life grows more complicated as the two continue to discuss her issues with him.

Cummings said the subject of professor versus student, his word against her word, is still relevant, especially in a college town like Ithaca. She said she hopes the content of the play will spark discussions among students and professors alike.

Cummings said the first step in the directing process was deciding exactly what this play is about. “Oleanna,” which she calls the most challenging play she has ever done, was particularly difficult because the characters reach a peak in their story lines at two different points.

“Act one is like, fun,” Cummings said. “Act two is a hurricane, act three is the tornado. It’s the calm before the storm. Carol comes in, and she doesn’t let up. She’s already made her complaints, so by the time act two starts, the hurricane is in full swing, or it’s on its way to hit.”

“She has a really interesting point, that the definition of harassment or the definition of abuse isn’t for the abuser to decide, it’s for the victim to decide,” Martin said. “I wouldn’t call myself a victim if I were in her shoes. I understand why she did. She interprets [John’s] actions, and it’s in that interpretation that abuse happens.”

Perry said he also disagreed with many of his character’s actions, but for him that made it more fun than challenging.

Martin said she hopes the audience will discuss the characters and not immediately label one as the clear antagonist.