Theater department concludes mainstage season with “An Enemy of the People” 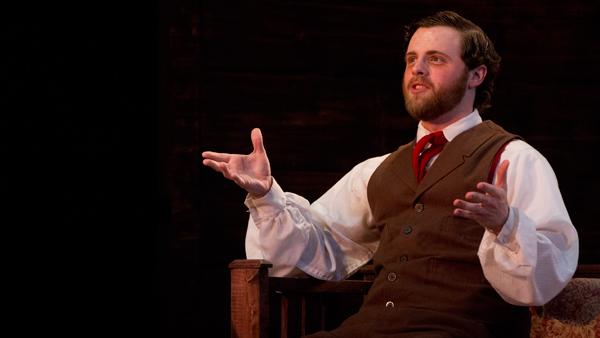 In a time and place where speaking the truth is the wrong thing to do, one individual will become an enemy to everyone he knows in an effort to save them all.

The theater department’s production of “An Enemy of the People,” by Henrik Ibsen, adapted by Arthur Miller, opens Thursday in the Hoerner Theatre in Dillingham Center.

“Enemy” is both a family drama and a political fable, following the two Stockmann brothers as they conflict about how to best protect their community. The story takes place in the 1880s in a small, unnamed town on the southern coast of Norway, where the only profitable industry supporting local life is new medicinal springs for tourists.

The town physician, Dr. Thomas Stockmann (senior Matt Prigge), has recently helped open a health resort around the mineral water in the town’s springs. He then discovers the water is poisoned and harming visitors. He begins to spread the news, but his older brother and the mayor of the town, Peter Stockmann (senior Dan Berlingeri), refuses to accept the facts, because the shutdown of the springs would be an economic death sentence for the town.

“Enemy” was Ibsen’s reaction to the premiere of his play “Ghosts” in 1882, a scandal regarding the presence of venereal disease among upper class characters. Miller chose to adapt the classic for American theater in the 1950s, just after the House Un-American Activities Committee, a committee of the House of Representatives investigating citizens and organizations that might have Communist ties, began questioning and blacklisting Hollywood and performing artists.

Throughout the play, both brothers are torn between the value of absolute truth and the welfare of themselves and others, just as Ibsen and Miller were.

Prigge said the play emphasizes how much one individual will give up to defend something important. The doctor has a history of heated arguments and strongly worded editorials, but this episode has higher stakes and greater consequences.

“He’s never had a moment before where he had to speak quite this loudly,” Prigge said.

For Berlingeri, the division of protagonist versus antagonist is not clear-cut.

The mayor, technically the “villain,” acts out of his concern for his community, choosing to defend his town’s economy rather than defend the abstract idea of truth. He struggles against what he perceives as his “brother’s sporadic nature, his hog wildness, his stubbornness,” Berlingeri said. While the play focuses on the doctor’s “struggle to advocate for the truth,” Berlingeri said that is the mayor’s journey as well.

“My character’s also struggling for the truth,” Berlingeri said. “We’re just on different sides of the same argument.”

Berlingeri said this production made him realize how difficult it can be for people to make huge, personal sacrifices for a cause.

“It really reflects a time very far removed from our own way of life that was once so much more about community and community activism,” Berlingeri said.

The cast explored these conflicts of humanity and community at the most basic level with the director, Bob Moss.

Prigge said they worked to learn and see how difficult it is for the brothers and townspeople to betray each other as fellow human beings rather than political figures.

“It’s very easy for the characters in this play to become talking heads, and we’re not interested in that happening,” Prigge said. “One of the first things Bob said to me was, ‘We’re going to try to delay you getting on that soapbox as long as we possibly can.'”

Moss, former artistic director of the Hangar Theatre and of Syracuse Stage and now a freelance director, said he took this depth of examination beyond the primary characters, developing background stories, motivations and turning points for each of the ensemble members.

“I wanted everyone rooted in the scene,” Moss said. “I felt this is a small town, everybody knows each other. So we spent a Saturday morning when everybody had made up a story that involved their character and two other characters in the town. They each had five minutes, and they told wonderful, sad, funny, sexy stories. At the end of it, we all had a sense of — we knew each other and what the town was like. They each have their own reason for anger.”

Senior Emilio Martinez Zurita de la Garza said his set design strove to bring that small Norwegian town alive. It is not designed in the Victorian style — as Ibsen’s work often is — but like the historical look of Norway in the 1880s, filled with cabins made of logs and huge planks. The main focus of his design is a hanging representation of the town, which he has referred to as the “gesture.” This gesture, with houses, a church and a ship painted onto it, pushes the action downstage, closer to the audience.

“The town ‘gesture’ is the town in an abstracted, sculptural form upstage,” Zurita said. “It’s a hovering presence, built by [the technical director, senior] Maggie McCarthy.”

Zurita said while the play is set in Norway, that particular location is neither central to the plot nor exclusive for the experience of the characters.

“What you will see onstage is not exactly Norway,” Zurita said. “It’s a gesture of Norway, which is a parable for all the things that are happening to us right now.”

The cast and crew said they draw parallels between the setting of the play and the location of the performance, regarding both central New York’s struggle against fracking and a lack of political activism in modern times.

Moss said he found inspiration for the doctor in the struggle of student protesters in the 1970s against the conflict in Vietnam, as well as the efforts of New York City activist and playwright Larry Kramer.

“One man decides to stand up against the whole world because he knows he’s right, and the world doesn’t want to hear what he has to say,” Moss said. “We don’t have a lot of those people anymore, people who are willing to stand up, against everyone.”

Prigge said the basic question of the play — the risks of speaking the truth — transcends 19th century Norway.