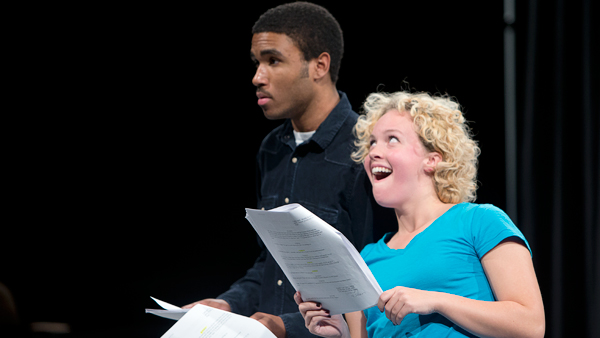 Five undocumented teenagers go to school or work every day in fear, hoping not to be discovered. Others label them as Nigerian, Ukrainian, Mexican, Korean and Jordanian, but the only home they can remember is New York City. Their stories make up “Dream Acts: A Play About Undocumented DREAM-Eligible Youth,” a fictional play written to illustrate the actual realities of at least two million undocumented youth living across the U.S. trying to evade detection.

The department of theater arts and the Center for Faculty Excellence will present a staged reading at 4 p.m. Feb. 6 in the Clark Lounge. The Development, Relief, and Education for Alien Minors Act is a proposal to provide permanent residency to illegal citizens in the U.S. The play follows the ordinary daily activities of five DREAM Act-eligible youth, as they interact with parents, employers and strangers, dreaming of the day when they can stop pretending and legally join the only country they have ever known.

The DREAM Act Union, a group of female NYC-based theatre artists, including Saviana Stanescu, assistant professor of theater arts, collectively wrote “Dream Acts.” It premiered in March at the HERE Arts Center in New York City, followed by a panel discussion on immigration.

“‘Dream Acts’ was initially conceived by playwright Chiori Miyagawa who invited us, the other four playwrights, myself, Mia Chung, Jessica Litwak and Andrea Thome, to write together for ‘Dream Acts,’” Stanescu said. “We all had to initially write a 10-minute play and to write a character who wasn’t from our ethnic background.”

“We wanted to focus on these people’s everyday life, to show the problems they have in everyday life and how regular [a] life they have but at [the] same time how they take a risk, how it’s dangerous for them at any given time, since they do risk getting deported,” Stanescu said.

A previous staged reading of “Dream Acts,” directed by Stanescu, was performed in October in the Clark Theatre in Dillingham Center in conjunction with Miyagawa’s visit to Ithaca for a reading of another one of her plays by the Civic Ensemble at the Kitchen Theatre. The post-show panel discussion was cut short by the campus shutdown caused by Hurricane Sandy. Wade Pickren, one of the panelists and the director of the Center for Faculty Excellence, then volunteered to organize a second production in the spring semester.

Stanescu, herself an immigrant from Romania and the founder of Immigrants Artists and Scholars in New York, said theater should be a political catalyst for its community.

“I do believe theater’s role in society is to address various issues and to open debates about major issues,” Stanescu said. “Theater is a good platform for doing so because it addresses questions and issues while also being entertaining at the same time.”

Rodriguez said various forms of the DREAM Act have been debated since 2001, and therefore increased awareness is essential for its success.

“People understand it in a way that is very threatening,” Rodriguez said. “It’s not threatening. It’s actually giving an opportunity to someone who has been here and would bring a lot to the United States. It’s not general amnesty like a lot of people say it is. It’s not a pathway for everyone to get citizenship. It’s very delineated.”

Pitcher, who plays the role of Middle Eastern “dreamer” Wahid, said he did not know about the DREAM Act before he joined the production last semester but now considers it to be important.

“It tells stories about undocumented children, kids who have been here for a long time and have had several obstacles, one of which is the discrimination they face and how they feel like they belong here, but the government doesn’t think that way,” Rodriguez said.

No federal legislation has been passed yet, Rodriguez said, but President Barack Obama’s executive order for deferred action regarding deportation for DREAM-eligible youth indicates increasing government support for the bill.

Stanescu said everyone should be interested in the DREAM Act and issues surrounding immigration.

“People everywhere should be interested in these issues,” Stanescu said. “We need to engage in this kind of cross-cultural, cross-class, cross-race communications so we can maybe hopefully in the future eliminate those distinctions between us as humans.”