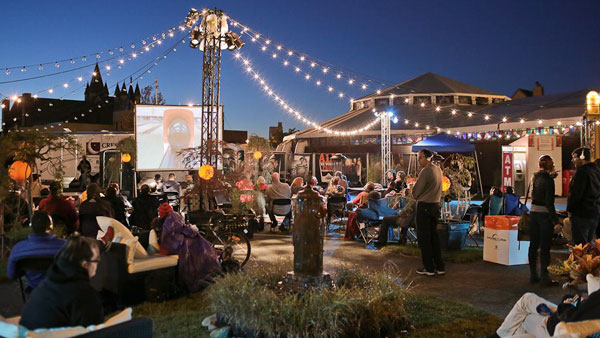 A bearded Scotsman in a kilt stands atop a wobbling ladder wielding four glinting machetes. He asks the audience to slow clap as he begins to strip down to a pair of snug, tomato-red briefs. Unexpectedly, he dons a hidden pair of silver sunglasses, waving the blades in the air and making a spectacle of himself as he yells:

“What they don’t tell you when you turn 30 … this is what men are supposed to look like!”

This cheeky street act is only a glimpse into the myriad world of fringe theater, a style of performance that originated as an alternative to the more curated performances of the yearly Edinburgh Art Festival in Scotland. Soon, other fringes cropped up as a more experimental counterpoint to the mainstream theater scene, allowing submissions of any nature, style or theme.

George Sapio, the producing artistic director of Ithaca Fringe, will bring the fringe festival experience to Ithaca for the first time April 24–27. The festival will feature five original acts that will take place during overlapping time slots over the course of four days. The performances will take place downtown in several different spaces including Cinemapolis, the Community School of Music and Art and the basement of Center Ithaca.

One of the acts showing at Cinemapolis is “Hand Grenades,” a love story of two women, Ophelia and Diana. When tragedy strikes, Ophelia finds comfort in silence, while Diana finds solace in her new friend, Troy, a second love interest. Monica Giordano, the writer of “Hand Grenades,” said the intimate setting allows the audience to better connect with the piece.

“There are a lot of nuances in the script that make it more compatible with a small space than on a [giant] stage,” Giordano said.

Giordano said she is excited to see her piece performed in the unconventional setting of a fringe festival.

“Putting [the play] in a movie theater, instead of seeing a movie, [people are] seeing something live … to me there’s something beautiful about going to a [familiar] place and seeing something unexpected,” Giordano said.

While “Hand Grenades” will be coming to town for its debut performance, pieces like Amanda Moretti’s “Homage to Federico Garcia Lorca” have already found success on the local stage, selling out for its opening night at the Fall Creek Studio last January.

“Homage” is a butoh piece, a style of movement that concerns itself not only with physical technique, but also with excavating authentic emotion from the performers. Butoh creates the story through imagery like the dancer sewing a shadow onto his or her body. The updated version of the piece will add a more choreography-intensive 20 minutes to the original half hour show.

The Fringe will also feature more light-hearted, comedic acts, such as David Guaspari’s “Four Easy Pieces,” a series of short plays. The performances involve lab rats pondering the meaning of life, soulmates who meet on the ledges of two opposing buildings and some really lousy poetry.

A fourth act of Guaspari’s series, “Speed Mating,” is a humorous tale about four bugs that emerge from underground after 17 years only to realize tragically that their above-ground lifespan is only an hour long.

“A couple of them have the urge to mate, but they’re not quite sure what that is,” Guaspari said. “They have to work out their life story in 60 minutes.”

Other acts, like Michael Burnham’s “Warriors & Other Victims,” favor a multidisciplinary approach to performance. This one was inspired by a helicopter crash and the concept of “flat daddies,” cardboard cut-out surrogates given to children whose parents were deployed to the military.

Burnham, who has attended almost every fringe festival in his hometown of Cincinnati, said the fringe is an opportunity for artists to experiment and develop a mode of storytelling that departs from the mainstream, formulaic crime dramas of the world.

“Eventually [the formula] limits what you can hear as an audience … you start to hear the genre instead of what’s actually spoken,” Burnham said. “And in the fringe, artists get to create that new way of speaking.”

Admission to the event is $10 per act, or $45 for a five show pass. All box office proceeds go directly to the performers themselves.