A Fight for Freedom: A Reflection on the Day of Action

One week ago at exactly this time, I would have just braced a massive snow storm driving back to Ithaca College after attending Planned Parenthood’s annual Day of Action in Albany, NY to lobby for women’s reproductive healthcare and the Women’s Equality Agenda. I spent the day listening to state legislators make speeches on choice and equality and the future of women’s healthcare. I rode on a bus with over seventy other activists. There were ten year olds, college students, and retired men and women. We were all fighting for the same thing: to create a world where everyone has access to quality reproductive healthcare, where everyone has the right to make their own decisions about their bodies, and legislators support survivors and fund services for their recovery. Unfortunately, we do not live in this world right now. But speaking up and talking to political figures about real, tangible polices surrounding these issues made me feel like we’re getting a little bit closer.

Prior to starting college, I was always shy and reserved. My teachers always told me to speak louder. It took until my freshman year of college before I really started to speak up. On the bus ride up, the organizers asked people to come up to the front of the bus and talk about why they are participating in the Day of Action. I listened to people share the stories that brought them to the reproductive justice movement. Two years ago, I would have stayed in my seat. But I stood up and I walked to the front of the bus and grabbed hold of that microphone.

I stood up and said: “I’m here because barriers to healthcare are barriers to equality. Everyone has the right to control their own bodies and fight back against injustices. It doesn’t matter that I’m young and only a college student, I have a voice and I’m allowed to use it.”

And that’s exactly what I did.

I stood in a room full of activists and spoke with Senator O’Mara’s assistant about the importance of allowing women to have autonomy over their reproductive and sexual health.

It’s 2015 and we’re facing an attack on sex education, access to contraception, and the right to have an abortion. And these decisions affect real people, real lives.

During the speeches, someone said, “If one generation plants a tree, the next generation will get the shade.” 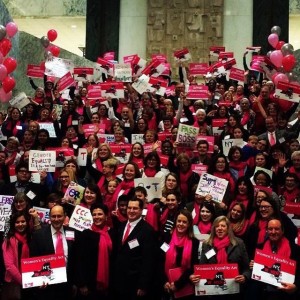