BlogsAre We Human, or Are We Traveler? 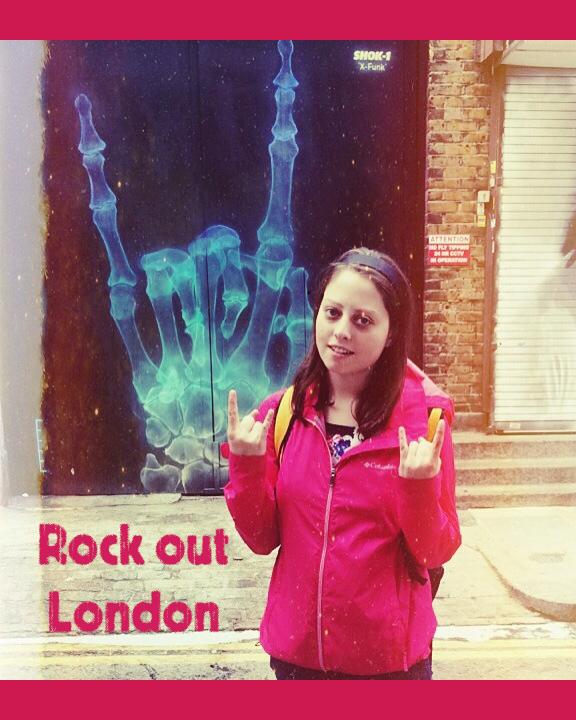 I hope that you’re all having a swell week, and I thank you for taking an interest in this blog!

This blog is going to be some sort of art, multi-media storytelling thing that I’ll use to share my adventures and cartoons while giving y’all an insight into the ICLC study abroad experience.

My goal is to have a study abroad experience as amazing and joyous as that of Lizzie McGuire. So far I haven’t  been mistaken for an Italian pop star, but there’s still time for that to happen!

It’s been a crazy couple of weeks, so in the Blog posts to come, I’ll probably bounce around the timeline to catch you up on the stories of my Supercalifragilisticexpialidocious and adventurous past month.

If you’re wondering about the title of this blog, it was inspired by one of the greatest songs ever written-Human, by The Killers.

If you spent any time with me this past summer (shout out to the 2k15 IC Orientation Staff!), then you know how much I weirdly adore this song. You’ve also probably experienced me singing different variations of it on multiple occasions.

But enough about my strange music tastes, let’s get to the story- 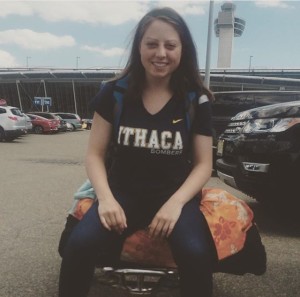 The last Instagram pic in the USA… #JFK #Airport

It has now been a month since I packed my life into 2 backpacks and an XXL neon orange duffle bag and hopped on a London-bound plane at JFK. 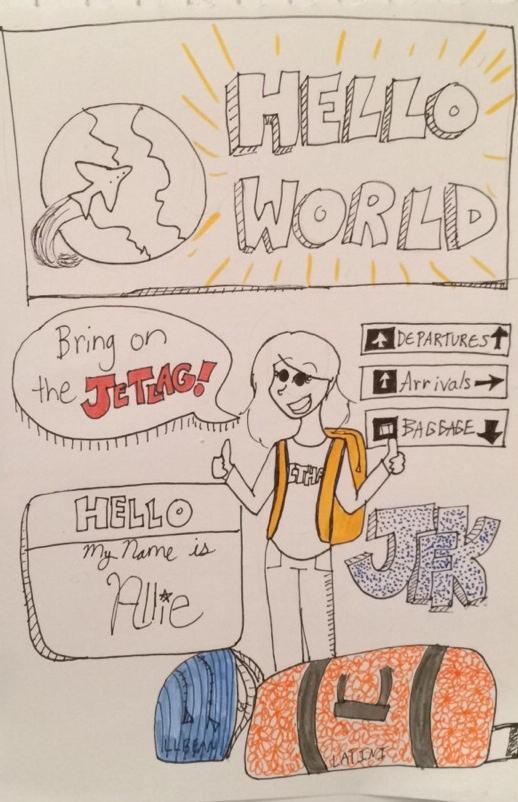 I had a lot of mixed feelings about leaving home. On one hand, I was totally excited and pumped to be traveling to a different continent for four months of exploration and adventure. On the other hand, I was terrified of leaving the US and IC-two acronyms that represented home and comfort. UK and ICLC seemed like unfamiliar jumbles of letters; spaces that my imagination could not even begin to fill.

I didn’t really begin to feel nervous until after I had said goodbye to my parents and made it through airport security. Saying goodbye was not as sad as I thought it would be. It was an incredibly joyful experience-my family was really excited to see me take advantage of this amazing opportunity and strike out into the world. I am extremely lucky to have such an amazing and supportive fam that helped me pack and save for this amazing trip (Thanks for being so awesome Mom and Dad!). After my mom reminded me (for the billionth time) to keep my bags with me at all times, I set off through the security line, and onwards towards my groovy international future.

I was the first one of the ICLC group to show up at the flight gate, which was a bit scary. I was alone for about 15 minutes, wondering if I’d gone to the wrong gate or if I’d forgotten something at home. I checked to make sure I had all of my luggage about a dozen times. 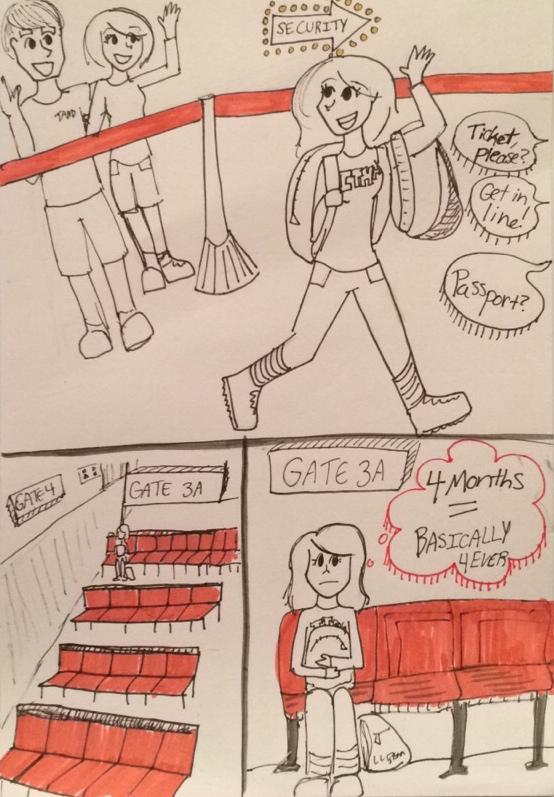 Luckily, I wasn’t alone for long! Soon, two of my lovely friends Bryn and Anna arrived at the gate, fresh off of their flight from Rochester, NY. We had a glorious and hilarious reunion in which Anna and I crooned about Taylor Swift and golden retrievers (two of our favorite living things).

Within a half-hour, a gaggle of wonderful IC students had assembled around the red plastic chairs of Gate 3A. The next few hours of waiting to board the plane were filled with joyful reunions, excited chatter, and nervous sandwich eating.

We also spent some time comparing our various anti-pickpocketing contraptions. Fanny packs, despite American Apparel’s best efforts, have been rapidly fading from both the fashion and travel industries. Believe it or not, Money Belts are now in vogue. 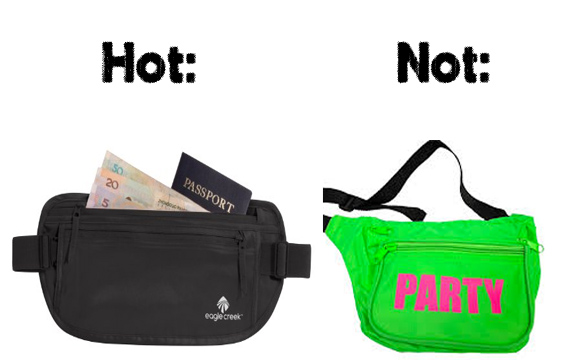 In this picture it doesn’t seem like there’s much of a difference between the two. I suppose the money belt is easier to conceal and is less bulky?

Despite how awesome this “Party” fanny pack looks, Money belts are the latest craze, people. I suggest you abandon your neon green fanny pack and invest in one of these anti-pick-pocket-devices today! 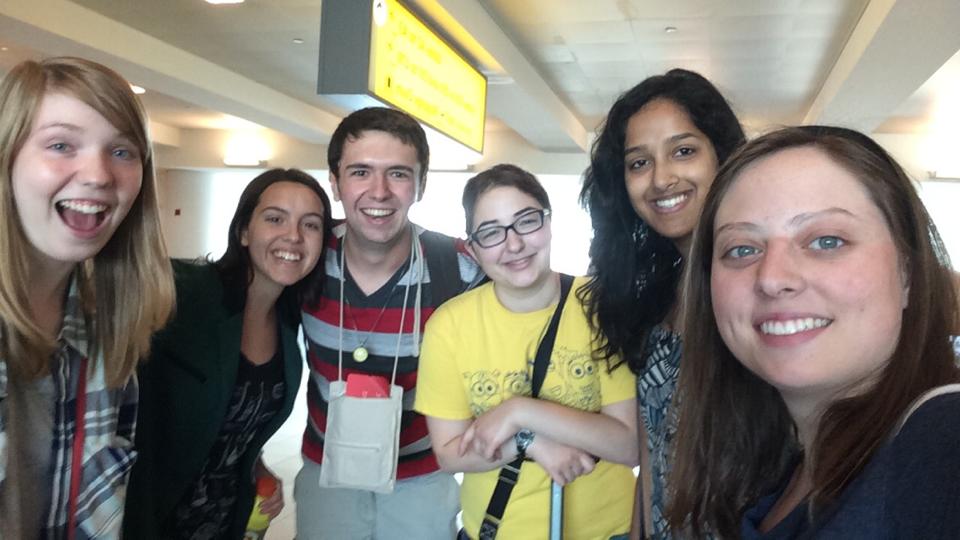 Just some attractive Twentysomethings (and Nineteensomethings), getting ready for their trip across the Pond! (Anna, Bryn, John, Samantha, Ramya, and I at the gate)

When we finally boarded the plane, it was a quick and relatively painless process. We walked through first class and all the way to the back of the plane. We were expecting the worst: a crowded compartment of cold faux-leather seats with little-to-no legroom.

We ended up being pleasantly surprised! 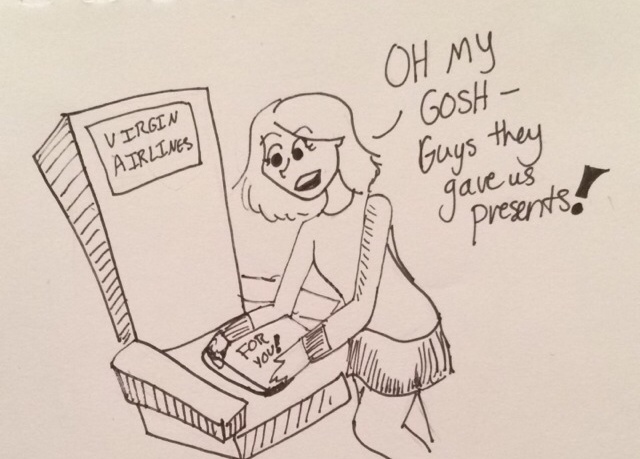 Not only was our section of the plane relatively empty (my friend Ella had a whole aisle to herself!), but-as Bryn quickly pointed out-Virgin Airlines had given us a ton of Airline Swag for our journey! 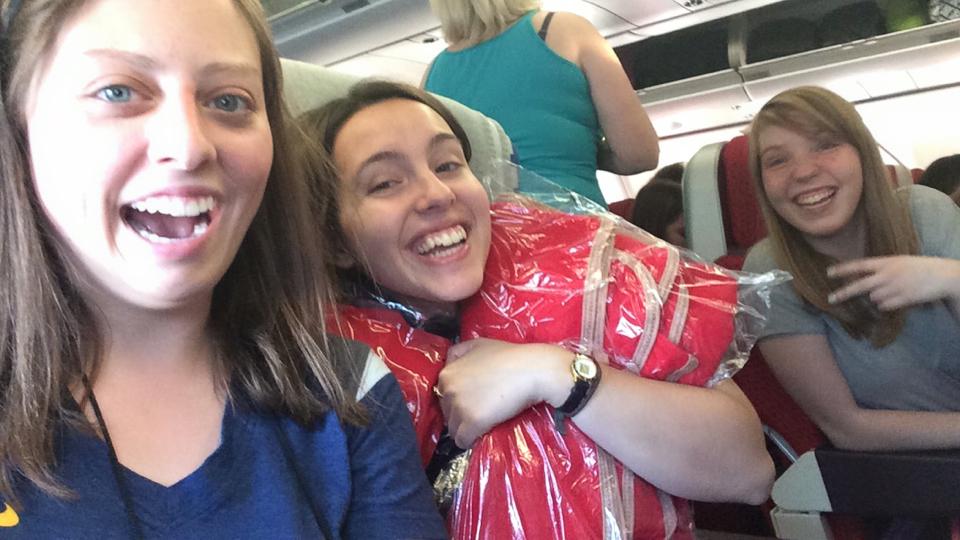 We happily gathered up our bright red blankets, pillows, and assorted Virgin Air goodies as we settled into our economy-class-movie-equipped seats.

Takeoff was an absolute riot. I did a push-up in one of the aisles on a dare. We switched seats and a stuffed toy wolf was passed from one aisle to the next.

As Bryn and I stuck our backpacks under our seats, we quickly recalled that it was our friend’s first ever plane ride. We decided that the best way to ease the stresses of takeoff was through emotional support and handholding. And so, the six of us interlocked hands through our seats and across the aisle for about five minutes. I’m sure that it was one of the most unique takeoff rituals the Virgin Air flight attendants had ever witnessed. 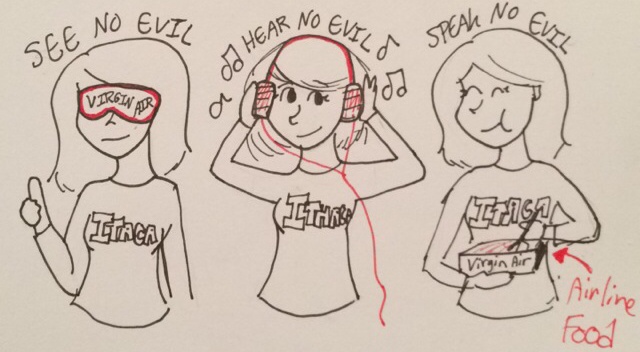 Some of the highlights of our plane ride-the sleeping masks, the Virgin Air headphones and movie, and the blueberry breakfast muffin.

I’m not a food critic, so my opinions are not extremely legit when it comes to the culinary arts. However, it does not take a food expert to realize that airline food is no delicacy. I would not recommend anything I ate on the plane beyond the tiny portions of pretzels and peanuts (and the aforementioned muffin). The idea of eating a heat-up TV dinner is extremely off-putting when you’ve got major butterflies in your stomach and are adjusting to a new sleep schedule.

My dinner consisted of some kind of colorless marinated beef chunks paired with unidentifiable vegetables and bread. Needless to say, the meal was not worthy of an Instagram picture. Luckily, our flight attendant’s peppiness and optimism made up for the low quality food. 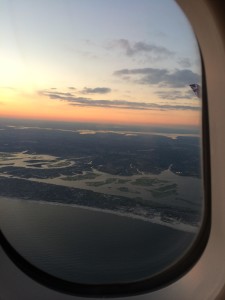 There were rumors that a meteor shower would be occurring during our flight, so we checked out the window a lot for shooting stars. I thought I caught a glimpse of one, but looking back I think that it was just the light on the wing of the plane (hopefully the wish I made still counts, though!). 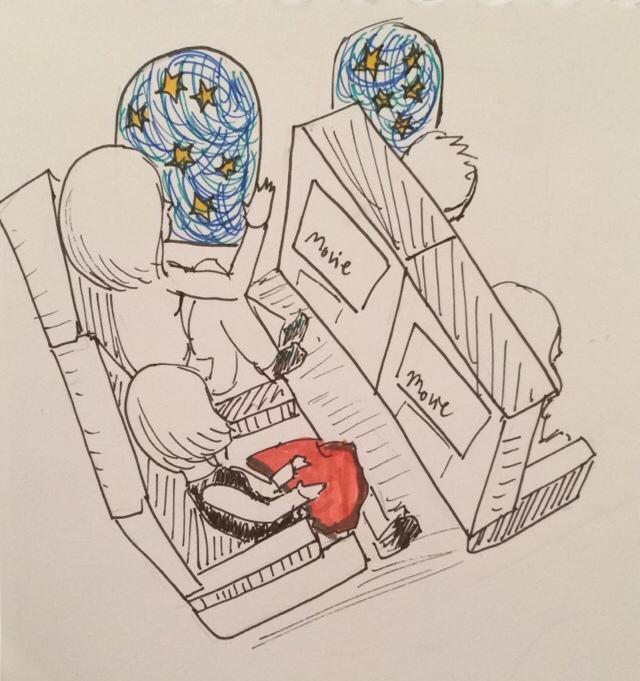 Our flight went by relatively quickly-it only took about five and a half hours to jump across the Atlantic. I don’t think any of us got much sleep (this would later come back to haunt us, as we still had about 8-12 hours left in our journey!), but we definitely gained a bit of culture from the wide variety of in-flight movies (I chose Disney’s Tomorrowland over The Grand Budapest Hotel). 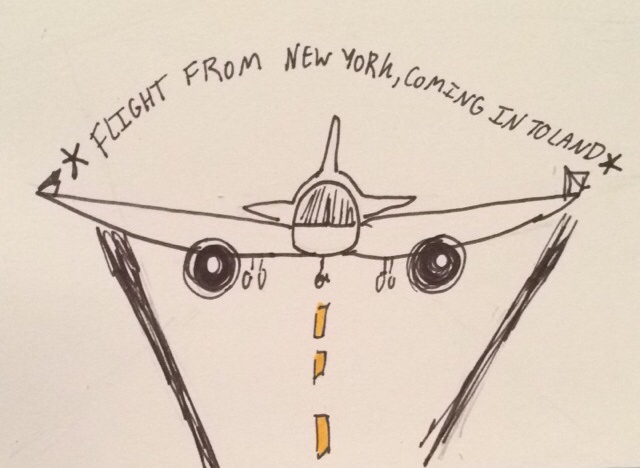 After landing, we all stumbled off of the plane in a daze. We kept double-checking to ensure that we all had our bags and iPods on us as we made our way through the terminal. As we grabbed our duffles and suitcases, we quickly identified our adult/trip leader/tour guide/guardian for the week-Steve, a Lighting Design Professor from IC. Steve waved to us from outside baggage claim, his bright orange hat standing out against the harsh black-and-white color scheme of Heathrow airport.

“Ithaca College, meet over here!” he called out over the din of a hundred bustling travelers.

We had made it through the flight.

We had left our hometowns and IC and the United States of America.

We had officially arrived in London. 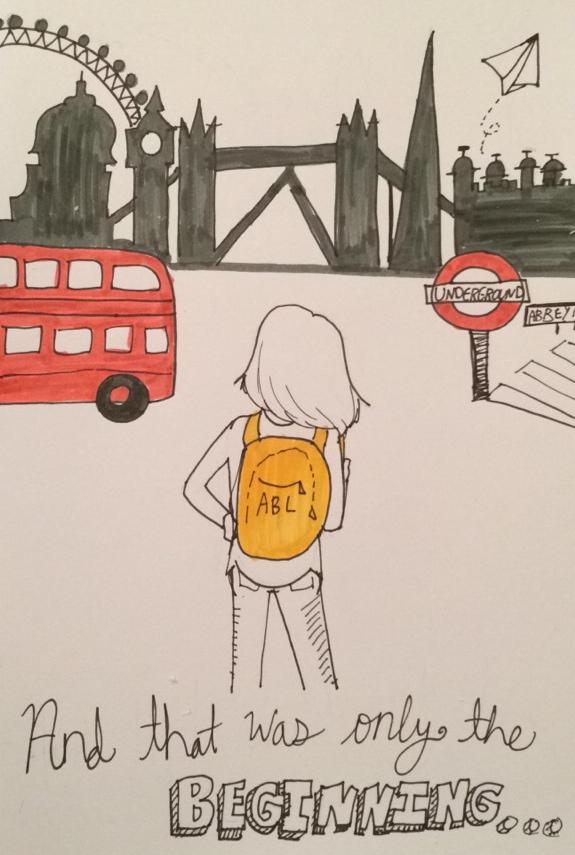