Congratulations, folks; we did it! We made it to November. When I think of November, I think of pumpkin pie, Thanksgiving, the unfortunate fact that the weather is getting worse, and… facial hair.

I’m going to just come out and say it — I am not a huge fan of No-Shave November. But one cannot deny that throughout the month, it becomes incredibly trendy for men to chuck their razors out the window and say bye-bye to shaving for a whole month. Apparently this “Movember” thing spawned over ten years ago from a campaign about men’s health awareness, but I think that deeper meaning is basically lost in 2011’s eleventh month. Now it sort of just seems like a way to document the growth of hair on your face every day, and also a way to prove to yourself and others that you can grow a magnificent ‘stache.

What I don’t understand is why people who already have facial hair (and when I say this, I mean substantial, full on beard-face facial hair, not just stubble), shave their entire face on October 31. I get that they might want to start from scratch, but come on, you already had a perfectly good beard! I think I’m alone in caring about this, so I digress.

This year, I’ve noticed several ad campaigns related to the beardy trend. The most horrifying, in my opinion, is this Boy Scout’s campaign featuring cute little boys with full-on Dumbledore beards. Is this going to inspire little boys to join the Boy Scouts? Is it a false promise to new members that they will be able to grow this kind of facial hair? I don’t know. But I know it is going to give me nightmares. 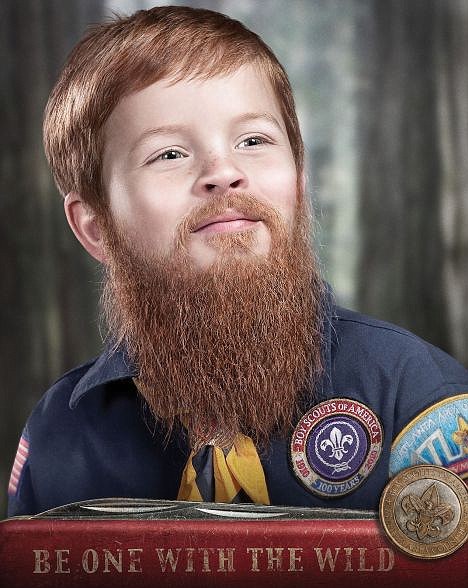 Anyway, power to all of you men who have gone razor-less this month. I look forward to seeing your progress.