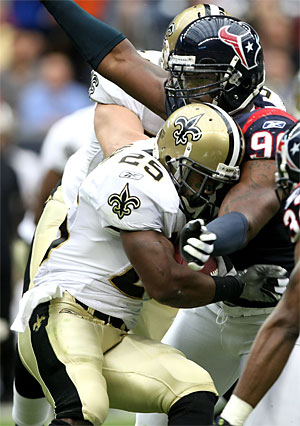 For a class I’m doing some research where I have to take notes during SportsCenter. It’s a pain, really (that’s right mom and dad, $50,000 a year). So as I’ve analyzed everything from the Top 10 Plays to counting how many times Skip Bayless says something wrong (just kidding I don’t have the stomach to watch him); I’ve been subjected to hearing about RG3 and Andrew Luck.

Everyone knows they’re going one and two in the draft and we’ve got guys like Mel Kiper predicting who’s going to have better statistics in ten years. I can’t stand that kind of stuff. Might as well bring in that psychic from that corner from that street and see if he knows who’ll have a better career. You just can’t pick apart a player from college and pretend to know how they’re going to do in the NFL until they put on that NFL jockstrap and take a hit from Patrick Willis.

Anyway, all that nonsense got me thinking about the Mario Williams and Reggie Bush debate from 2006. Yeah, I thought Reggie Bush was going to be amazing. So did all these other “experts.” But now Bush is starting (maybe, sort of, not really) for the Dolphins and Mario is the face of the Buffalo Bills franchise and signed a mega-millions deal.

I guess what I’m trying to say is that Mel Kiper’s words might as well be in the tongue my Intro to Sociology professor tried (failed) to teach me in. So, let’s pour some out for Andrew Luck and Robert Griffin III and hope in the next few years they’re happy where they’re at.

P.S. — I’d like to apologize to my fan for not posting on here in a while. I lost to the flu.