One and done needs to be done 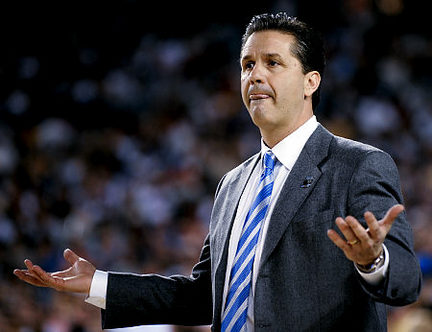 “There are only two solutions to it: Either I can recruit players who are not as good as the players I’m recruiting or I can try to convince guys that should leave to stay for me.” – John Calipari

We’re talking about the rule that says a teenage basketball player must attend one year of college before leaving for the NBA. And Calipari is right — the rule is dumb and he’s only playing into the system.

Calipari doesn’t say “student-athletes” when talking about his players. He gets it. His job is to win at all costs. He isn’t molding teenagers into men. He’s molding athletes into millionaires. These athletes don’t care one bit about school. 365/24/7 their goal is to sign that NBA contract. Don’t you essentially go to college so that you can one day collect a paycheck?

You might as well make athletes who think they can leap straight into the NBA from high school go to some basketball-only program for a year (invite only, so that schmucks like me can’t take a year off from school to hoop it up). You think Anthony Davis even does schoolwork? He could write about lamps and still get an A. That’s if he even does his own work.

But what if they like college and want to stay? I’d counter that with the fact that they aren’t in college. It’s a glorified training campus. The last time I wore a robe with Ithaca College on it was never. If you give me that argument, we might as well just pay college athletes because they are living better than anyone I know.

Either make it more years or zero years. Not two semesters. It’s silly. Spend that scholarship on a kid who wants to change the world, not throw a ball through a hoop.