Our toxic way of life

“There it is,” Doug announced as we pulled into the rail yard.

I wondered how many people drive by and mistake it for a snow drift. Some parts of the pile were even stained brown, much like how snow drifts get dirty as the winter goes on. 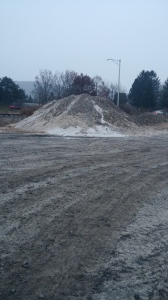 Large, fluffy flakes were falling from the pale grey sky. Although the snow wasn’t sticking yet, the gravel that Doug’s tires crunched over was already dusted in a layer of white. It was sand that coated the ground, much sharper and finer than the lovely puffs of water crystals descending from the heavens.

Doug pulled closer so I could take a picture. My phone clicked and the shutter closed, capturing the evidence.

“I can’t believe it’s just sitting out here in the open,” I muttered. Doug pointed across the road.

“That’s our city’s premier family park. When the wind kicks up it blows over there.”

As we fell silent again, I could feel the tension building. We were trespassing, after all. Our ruse of being lost tourists would only last so long. A freight truck had pulled into the rail yard ahead of us, and the driver must have noticed us by now.

It was now or never.

“I brought that jar,” I announced, referring to the jelly jar Doug had washed out for me before we left his house.

“You want to collect some?”

I nodded. I could see the look on his face go from surprise to one of a worried father. I could hear him thinking, “If she were my daughter…”

But not even a full second of deliberation went by before his expression turned to one of resolve, and he started to pull forward.

The car come to a stop and I lurched into action, as though Doug had hit an “eject” button for the passenger’s seat. I opened the door and unscrewed the lid to the jar as I stepped out. I could feel the presence of the truck driver behind me like a shadow falling over my back. The gravel and sand crunched under my sneakers as I hurried forward. The words on the sign I had seen as we pulled in, “Smile! You’re on camera!” flashed in my mind.

I knelt down at the base of the pile and scooped the mouth of the jar through the stuff. I made sure to get a sample that wasn’t dirtied. As I went to screw the lid back on, inevitably there was the layer of granules that had stuck to the outside of the jar.

My heart was pounding as I brushed the excess sand off the jar, and it wasn’t because I was risking trespass charges. It was because I knew there was a chance I was risking my life. Once I screwed the lid on, I frantically brushed my gloves off on my pant leg, and then did the best I could to shake the stuff off my pants. A little voice in my head told me that trying to decontaminate myself was futile, that if I had been smart I would have come here equipped with a mask. It could already be in my lungs.

I scrambled back into the car and Doug pulled out of the rail yard quickly. The truck driver seemed preoccupied with his delivery task. 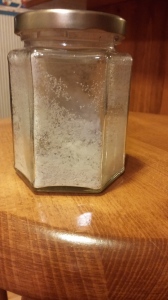 Once we got back to his house, I reached to pick up the glass jar from the floor mat. As I did, I noticed a smear of white on the floor.

“Doug, we need to vacuum the floor.”

He leaned over from the driver’s seat and peered down.

The first time I ever heard of frac sand was last year, when I watched a documentary called “The Price of Sand” at Ithaca College. At that point, I was well educated about the process of hydraulic fracturing to extract natural gas from shale layers, but I wasn’t as knowledgeable about one of the industry’s tentacles — silica sand mining.

“The Price of Sand” follows the stories of American citizens living in communities where silica sand mining takes place. They describe the mining companies coming in against their will, tearing up the land, and being unable to sleep because of the constant truck traffic. Not long after the companies move in, the silica sand starts blowing out of the mines, gathering in little drifts on the shoulders of the road outside of people’s homes. And then they start getting sick.

When silica sand gets into your lungs, it causes a potentially fatal sickness called silicosis. It’s characterized by shortness of breath, severe coughing, fatigue, weight loss and cyanosis; the official name for skin turning blue.

To put it simply, frac sand is nasty stuff. And it’s only one part of the entire fracking process.

I fiddled with the dial, peering through the lens, and the sand came into focus under the microscope’s gaze.

I let out a long breath I hadn’t realized I’d been holding in.

The sample of the sand I collected looked like every picture of frac sand I had ever seen. It was pristine white, devoid of any coloration, and the grains were smooth and almost perfectly rounded, with some variation. It looked very neat and intentional, not diverse and unruly like your average beach sand.

This was no official lab test, and I have no idea how to chemically test the sand to dispel uncertainties, but I’m capable of comparing images and determining if they match.

Everyone told me that the pile of white sand at the rail yard was frac sand. In response, I asked if it had ever been looked at or tested, and no one knew. So, rather than assume, I decided to take on the task myself despite the health risk.

Indeed, there is a pile of frac sand — life threatening when it enters the lungs — in the open air, within eye sight of family park and within a couple blocks of a school. Right here in New York State, grand old US of A. All it takes is a gust of wind, and it’s airborne and being inhaled by our children and whoever else is unfortunate enough to be around.

The risk of defiantly holding my ground in a blockade when a police officer orders me to disperse, the risk of gathering a sample of toxic sand in the pursuit of truth — it doesn’t feel so severe when I pause to think about it.

Because, in comparison, the oil and gas industry’s habit of gambling with human life for the sake of profit is far riskier.

And, even riskier than that — the future we will face if we don’t take action.