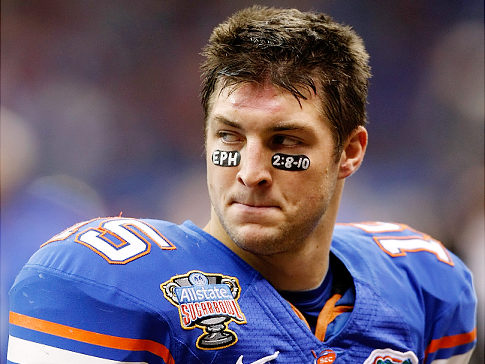 Tim Tebow has it way better than you and me. Guy is at least a four seed in a March Madness bracket deciding who in the world has the best life. Plays a game for a living, gets paid millions to do so, is beloved by millions, and also loves millions.

If you have ears and own a television, you already know this. But, something I think I know (but really have no idea) that you don’t know, is that Tebow is internally bumming. I feel as if I were pals with Tebow, he’d slap me up and say, “Sup Littleman…you know what? I’m tired of getting tossed around like bucket of Swedish Fish at a 12-year-old’s birthday party.”

Rodney Dangerfield and Tebow could relate. How can you win the ultimate goal in your profession at every level and still have people wanting you out of your job? Tebow won a Florida State Championship in high school; two National Titles in college; and every major individual accolade on the way. But his bosses still aren’t sold on his gig. Can’t get no respect.

Yes, there are various people who sit in front of a camera or computer screen and blabber away, acting like they have figured out Tebow and know him (sportswriters, #SkipBayless). Some of these talking heads give him respect. Sweet. Not like their (our) opinions really matter. The heads that decide things, don’t want to deal with Tebow.

And I can’t blame them either. Tebow is a cult. He gets followed everywhere. It was “news” what hotel he stayed at. I bet if he got caught sitting at your local hole in the wall, it’d make news. That’s a problem. He shouldn’t need to “get caught” anywhere. The man is one of the best animals in our species and he can’t even live a normal life. If I’m John Elway, do I want zealous Christian groups on my caboose forcing me to decide what quarterback I want winning games? No, I’ll just sign a guy everyone knows should start and escape the stress of having Tebow.

It’s not Tebow’s fault or football management — it’s that fellow who stares at you in the mirror.