The Fruits of Our Labor

How KXL Pipeline shows activism is paying off

Q: What is the Keystone XL Pipeline?

A: The Keystone XL Pipeline, or KXL, is a proposed 1,179 mile pipeline from a Canadian company called TransCanada. It would carry crude tar sands oil from extraction sites in Alberta, Canada to Steele City, Neb., where it would connect with the southern section of the pipeline to run to refineries in Texas. Tar sands is dirtier than other crude oils and emits more carbon dioxide in its lifetime. Not to mention, if spilled, it is nearly impossible to clean up due to its heavy, sticky nature, especially in water. Because it crosses an international border, the pipeline requires presidential approval.

Q: When the KXL project was first proposed in 2008, it was considered a ‘done deal.’ Why hasn’t it passed yet?

A: Activists and concerned citizens.

KXL hasn’t been built yet because environmentalists and environmental organizations have put up a huge stink about it. I was arrested with over 300 others on March 2 of this year for protesting the pipeline in front of the White House — the same weekend the Climate March started in Los Angeles. The Obama Administration is aware of the resistance from citizens and the consequences that will occur if the project is approved, but it is also aware of the huge amounts of money pouring in from the industry to move this forward. Hence, we find ourselves in a state of limbo where a definitive decision on the pipeline is continually delayed.

I had the unforgettable opportunity to meet some of the amazing people who stopped the pipeline in its tracks while the Climate March was in Nebraska. On July 19th, the March crossed the proposed KXL route in a massive stretch of soy and corn fields near the tiny town of Benedict. 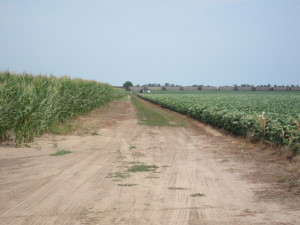 Corn on the left, soy on the right, and a coal train in the background.

Our destination was the Build Our Energy Barn — a wind and solar powered barn built directly in the path of KXL. The barn was constructed by volunteers in the summer and fall of 2013 with Bold Nebraska, an organization that has been key in the KXL fight.

The mileage between our camps that day was 11.9 miles. When we were one mile out from the barn, we were met by a group of locals and activists who marched with us for the remaining mile. As we were swept up in a mass of banners and passionate people chanting for a clean energy future, our tired spirits were lifted. 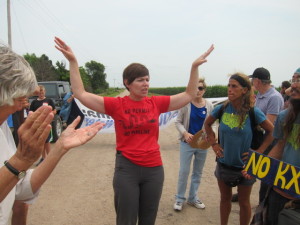 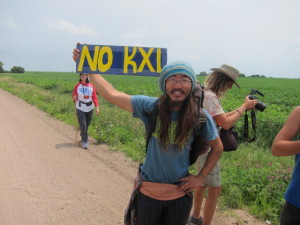 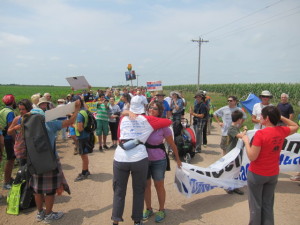 The meeting point of the Climate Marchers and the Bold Nebraskans! 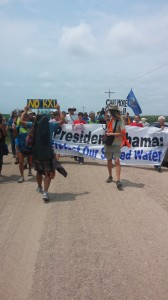 I’ll never forget seeing the barn for the first time. I remember all the emails I received the year before at the time the barn was being built. I remember wishing I could be there to help and thinking how creative this particular idea for resistance was. People were literally building an obstruction along the pipeline path. 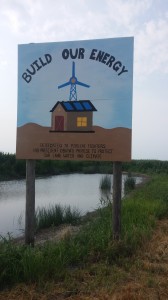 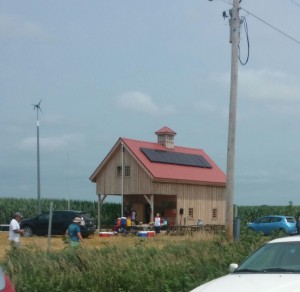 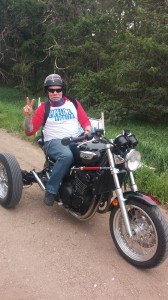 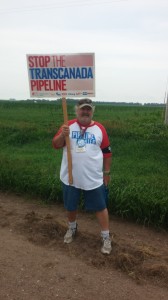 A couple of ‘Pipeline Fighters’: Tom (left) and Dennis (right) 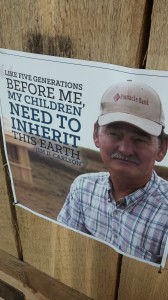 A poster at the barn

Most of the people who were there to greet us at the barn that day had participated in building the barn. Some of our very own Climate Marchers had even been a part of it. While marching to the barn, I encountered a man named Dean Jacobs who was wearing Native American jewelry and face paint. When I asked him about it, he said he was wearing it to represent his native friends in the Ecuadorian Rainforest who are currently facing the extinction of their people because of land exploitation from oil and logging companies. Turns out, he was talking about the Sapara Nation — the very Native American tribe I reported on during my Fall 2013 semester at Ithaca College. He is close friends with Manari Kaji Ushigua, the Sapara leader who came to speak at my school. Small world! 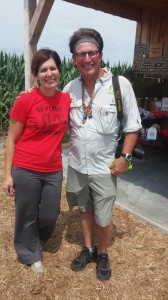 The highlight of the events that night at the barn was a screening of the documentary “Above All Else.” The documentary focuses around a man named David Daniel from East Texas, who, after discovering surveyor stakes on his land in 2008, decided to resist the construction of the southern leg of the KXL pipeline from Oklahoma to Texas. He invited other activists onto his land and created the Tar Sands Blockade — a small tree house village built directly in the path of construction. Peaceful protesters performed “tree-sits” to keep TransCanada from plowing through the forests. The film follows the story of the intense standoff, and — spoiler alert — does not have a happy ending. Eventually, TransCanada found a loophole and simply built the pipeline around their blockade, knocking down trees just yards away from the tree-sitters and putting their lives in danger.

There was hardly a dry eye in the room at the end of the film, and many of us felt enraged, devastated or both. I was one of those who felt both, as well as a third feeling rising from the ashes of the film’s ending — determination. I know that these corporations have no right to be exploiting people, whether they live in Nebraska or Texas or the Ecuadorian Rainforest, and I know that this current system cannot last. Although the Tar Sands Blockade failed to stop TransCanada in the south, the northern section of KXL has not been built because of activists. There are currently no permits to build KXL in Nebraska and South Dakota, and that’s largely because of landowners refusing to sign leases, even when threatened with imminent domain. Imminent domain is the threat that companies will come anyways, regardless if landowners sign the lease.

Meeting all of the brave people at the Energy Barn gave me hope that this fight against corporate giants is not impossible. It gave me hope for the corporate battle I’m facing at my own home in New York to save Seneca Lake from gas storage. It showed me that even though we’re small individually, when the people unite, we can accomplish anything. 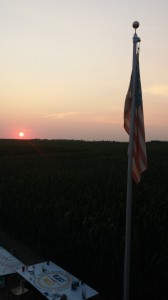 Sunset at the Build Our Energy Barn