The War on Drugs Play Castaways 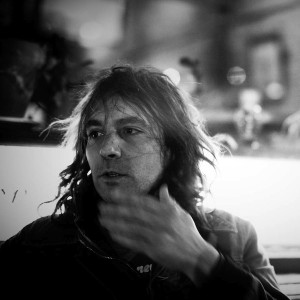 Saturday night, Ithaca was lucky enough to be graced by the presence of Philadelphia rock band The War on Drugs. The quintet stopped by Castaways before they head down to New York City to open for The National at the much larger and fancier Beacon Theatre.

I would like to give an immediate shoutout/thank you to The War on Drugs’ lead singer, Adam Granduciel. There was apparently a mix-up and my name was not on the guest list as a writer for “The Ithacan.” Luckily, Adam came over and offered to put me on the band’s list. That was incredibly lucky and incredibly generous. Thanks!

Upwards of 150 attendees occupied the bar as “Rudolph” played on the TVs and the usual plaid-clad denizens milled about during soundchecks.

First up was local act Kin Ship. Even though it was only their second time playing together, the group of 20-somethings was on point for the most part. Their upbeat tunes and stage banter worked well with the crowd as those present shimmied along to the playful instrumentals.

Following Kin Ship, fellow Philly band Arc in Round took to the stage to deliver a taste of their darker, synthesizer-fortified gloom. If I had to compare them to anyone, I’d put them next to Explosions in the Sky if Explosions in the Sky used vocals. Most of the crowd simply bobbed their heads and rocked their hips. But there were two females of the drunken variety who were busting slightly out of place moves right at the front of the stage.

When The War on Drugs began around 11:30pm, the audience crept closer and jockeyed for position.

The band is able to take older sounding melodies and rework them to create something original that they can call their own. One can hear a little Bob Dylan in Granduciel’s voice, Boy-era U2 in some of the bass line and drum patterns and it’s impossible to ignore the connection between the harmonica/saxophone and Springsteen.

The set started off calmly as the band built upon each song. Each track would play out and then be punctuated by a solid minute where each instrument seemed to freestyle a bit. Granduciel would kick in the guitar’s sustain and race along the frets as the saxophone would add flourishes here and there.

The majority of their set drew from their stellar new album, Slave Ambient, with songs like “Brothers,” “Best Night” and the dance-inducing “Baby Missiles” which features some mean organ lines.

One of the stranger moments occurred when Granduciel complimented a guy’s sweater in the audience and explained he had a sweater that was stolen from him a while ago. One girl took this to mean he wanted the sweater. She removed the garment from the guy and brought it up onstage. While there, she danced around as the band played and tried to figure out how to use the harmonica Granduciel had given her. Another gentlemen soon joined them and played said harmonica.

Overall, it was an interesting moment that managed to be odd, funny and adorable all at the same time. The band was smiling and so were those in the crowd. Ultimately, I think they learned a little about the communal and free-spirited nature of Ithaca. Hopefully they enjoyed it and we hope to see them again very soon.