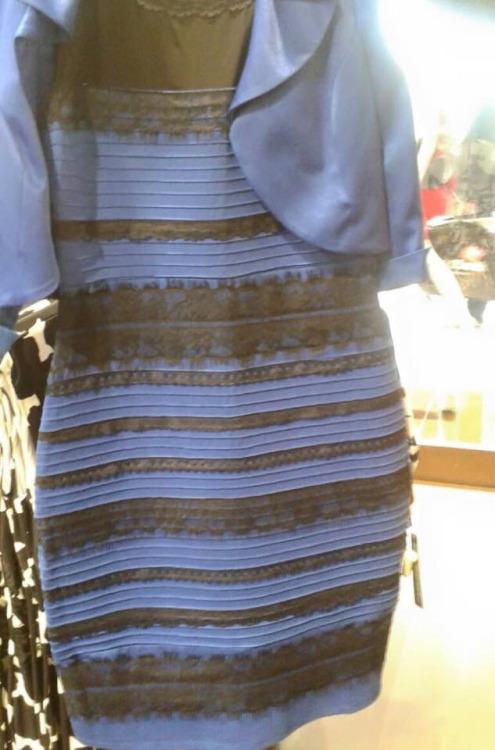 For the last few days, I have been drinking water, taking medicine, and feeling absolutely sick. Therefore, I took a much-needed break from social media and the Internet as a whole. It was only a couple of days, so I just assumed that I would miss the basics: Kanye said something dumb again, more celebrities argued over Twitter, a new One Direction breakup rumor surfaced. However, I come back to my home away from home to find that some dress has completely destroyed the Internet.

Currently, there is a debate as to whether the dress pictured above is #blackandblue or #whiteandgold. The picture went viral after Tumblr user “Swiked” posted it online and has trended number one worldwide on Twitter. And with this silly debate, the store “Roman Originals” located in Birmingham is making tons of money and gaining plenty of publicity. I mean, Ellen Degeneres herself has ordered the dress with express shipping, so it can appear on her talk show early next week. And if that isn’t enough, every celebrity and my grandmother has weighed in on Twitter about what they see.

Personally, I see the dress as “black and blue.” I really do. For a second, I did manage to see it as white and gold, but it quickly went back to what I perceive as normal. So, since we are in such a debate about the dress and no one seems to agree, let’s talk about the things that we do agree on.

Whether the dress is blue and black or white and gold, who really cares at the end of the day? It’s just a silly, ugly dress that happened to go viral. Besides, I’m sure that there are better uses of our time. However, the real lesson here is that the Internet is a very powerful entity and should be acknowledged as such. Yes, this time, it may have been an article of clothing, but, if used correctly, the Internet can change the world, as we know it. Just you wait and see.