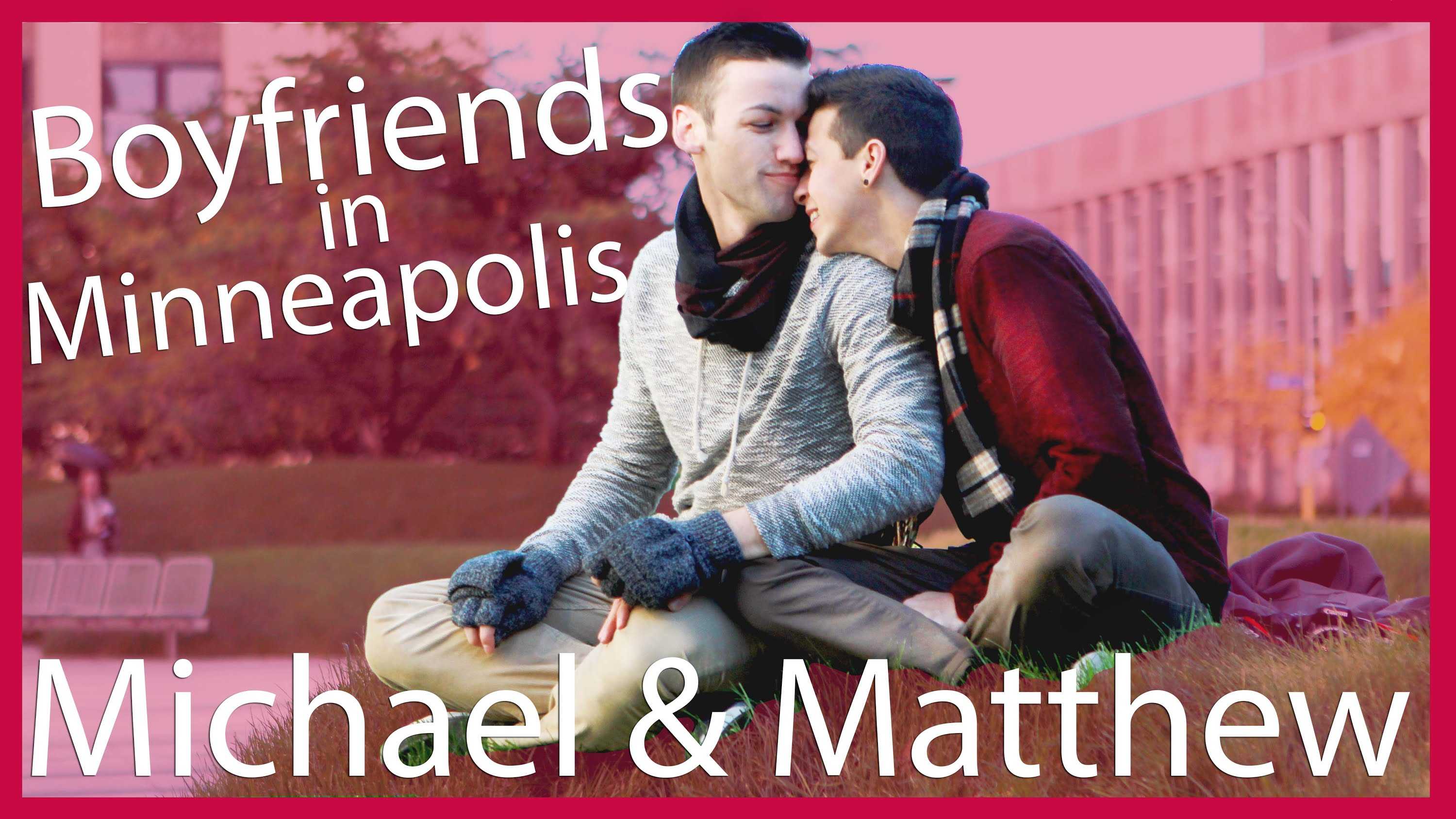 Now, when one thinks of dating websites, one might think of ChristianMingle.com or eHarmony or even popular dating apps like Tinder and Grindr (Lord, help you all…) However, for two of my idols and possibly one of the most adorable couples on Earth, YouTube was their means of finding love. Matthew Schueller and Michael Lindsay are two YouTubers with nearly 75,000 subscribers combined. They met by watching each other’s “Coming Out” video and are now one of the cutest couples on YouTube.

Recently, I had the wonderful opportunity to interview the two of them via email. (Similar to my interview with Jack Merridew.) The reason I chose to contact these two Internet sensations is because of how much of a fan I am. One of my favorite things to see on YouTube is a “Boyfriend Tag”, which is a series of questions two boyfriends ask one another. In fact, I have my own, which you can watch here at youtube.com/angelzayas24 . (Shameless plug = YAAASSS!) But, more importantly, they are really heartwarming. It gives a person like me hope for my love life. (Also, I would like to become an ordained minister if it means I can be the one to marry them, someday. Just saying.)

So, without further adieu, I present my interview with Michael and Matthew! Hope you enjoy!

Note: All answers are in the format Matthew and Michael answered them in! This is to keep things as genuine as possible.

Pokemon or your boyfriend? (Be honest!)

Yes, more than life itself.

I haven’t had time to have a celebrity crush lately! Dental school has basically taken up all my time!

How much do you love each other?

like more than all of the puppies and unicorns in the world.

like I cried butttttttt maybe he will go solo and redeem us with even more music.

Favorite song at the moment?

Rather Be by Clean Bandit

Squirtle (because it may be the only one I know)

How have you changed since you first started YouTube? (Stylistically, as a person, etc.)

I think I’ve kind of found more of a niche in a travel vlog format kind of person rather than a sit-down video. I’m more comfortable on the go with these kinds of things.

As a couple that has met online by watching each other’s coming out videos, is it ever weird to explain to people how you met? (What do your parents think?)

It is strange all the time, because it’s such an unusual thing. The parents at first were not really aware or if they really fully understand exactly how we became acquainted, but they are happy that we are dating and fully supportive.

What has been your experience with the LGBT community and growing up feeling what society perceives as “different”?

I had friends in high school that were LGBT and I was confused going through school, and growing up in a small town I didn’t have a lot of interaction with LGBT and I wasn’t sure how it would affect me in the long run spiritually. But, then I researched it further and realized I needed to accept who I was.

What is your dream job? Would you like to stay on YouTube forever or what’s after this?

My dream job would be a performer or entertainer or actor, but yes, I would like to stay on YouTube for a long time. However long that may be, I’m not really sure. I’m just happy doing what I’m doing right now. But at the moment I’m going to Dental school to be a dentist…so I know that my life won’t really lead to a career in performance long-term.

Do you have YouTube role models? If so, who?

I like Will and RJ, Mark and Ethan, I love love love DailyGrace. Those are my favorites!

I would consider both of them our boyfriend channels (1st and 2nd). I think we are a little more oriented towards LGBT focused-commentary and we talk about things that maybe some others would rather not address all the time … we don’t do as much of those daily-life-style vlogs seen on other channels, and we take a more serious look at things that affect our lives. We do more than kiss and make-out and make penis-jokes and get drunk on our channels hahaha.

If you could say one thing to your past self, what would it be?

If you could change one thing about the world, what would it be?

Oh my god. That’s hard! I would change prejudices towards people. I would change the ability of someone to discriminate or dislike someone based off of something that someone else can’t control. I just think prejudice is the worst thing and discrimination in general should just go away. I feel like this would really have a huge impact on people’s happiness in general in the world.

Pokemon or your boyfriend? (Be honest!)

THAT IS SUCH A HARD QUESTION!!!!!! I mean it depends if we are talking about cute little chairmander or like a muk…. I would have to go with Michael, he’s like a Pokemon at times.

LOVE Chipotle. I usually get the chicken with a wheat tortilla and black beans!

Salamanca, Spain. It’s the most magical place on earth.

Dylan O’Brien from Teen Wolf will always be my biggest celebrity crush. <3_<3

How much do you love each other?

That’s like asking how many grains of sand there are on a beach. It’s unmeasurable. A ton. Love is an obscure thing and I haven’t quite grasped what exactly it means, but we feel very strongly towards each other, we want the best for one another and are willing to make immense sacrifices for the happiness of the other.

I WANT TO CRY EVERY MINUTE OF EVERY DAY.

Favorite song at the moment?

Everything that St. Lucia writes.

I love the cuteness of Eevee and it’s ability to transform into so many different varieties!

I was inspired in 2007 by the first people ever deciding to video blog on Youtube and I wanted to do exactly what they were doing. It was so cool to see these people start to form this community!

How have you changed since you first started YouTube? (Stylistically, as a person, etc.)

I’ve changed A TON. 8 years does a number on someone! I primarily did skits and short films and slowly vlogging more and more as I started talking to others on YouTube. I’ve become more and more comfortable and proud of myself as I’ve shared my life over the internet.

As a couple that has met online by watching each other’s coming out videos, is it ever weird to explain to people how you met? (What do your parents think?)

It is kind of strange trying to explain to others how we met. Really, people in general just don’t get it if they don’t get YouTube, and the community that exists on YouTube. It’s very different than conventional ways of meeting others, but I wouldn’t want it any other way.

What has been your experience with the LGBT community and growing up feeling what society perceives as “different”?

I had a difficult time growing up trying to understand and accept myself with this way about me that was seen as sinful in my community. I explained most of this through my coming out video on YouTube, but my experience with the LGBT community has been pure understanding. Those who have common backgrounds to me just get me, and I love that because it helps me get me.

What is your dream job? Would you like to stay on YouTube forever or what’s after this?

I really don’t know the answer! I’ve been struggling so much lately trying to find what direction to go. If I could make a living with YouTube, I would absolutely do it for the rest of my life. It’s what I love to do. I help others by this kind of open communication, and I feel satisfied and happy with my work.

Do you have YouTube role models? If so, who?

I consider the booshoe37 channel a mixed bag. It’s been with me since I started on YouTube and it’s taken different forms over the years. Right now Michael and I post a lot of videos together on there, so it is quite a lot like a boyfriend channel — but we also do our own separate vlogs and try to keep ourselves independent as well!

If you could say one thing to your past self, what would it be?

It’s okay to hang out with yourself every once and while, do what you want to do and be who you want to be, don’t change yourself or what you love for anyone. Reach as high as you can.

If you could change one thing about the world, what would it be?

I wish everyone would be considered equals. Whether it’s cultural differences, family background or even how much money a person has, a terrible hierarchy is always in place where others feel the need to put themselves above others in order to feel better about themselves. It’s destructive and a terrible thing. I wish we could just all live together equally.

In short, I’d like to thank both Matthew and Michael for taking time out of their busy schedules to answer my questions. There were a lot of them, so I know it was time-consuming. (Sorry about that!) And, lastly, everyone should check out their channel and subscribe, because they are some of the most inspirational, funny people I’ve ever had the pleasure of watching. Wishing your relationship many years of happiness and joy! Stay strong and good luck!

Until next time, readers!