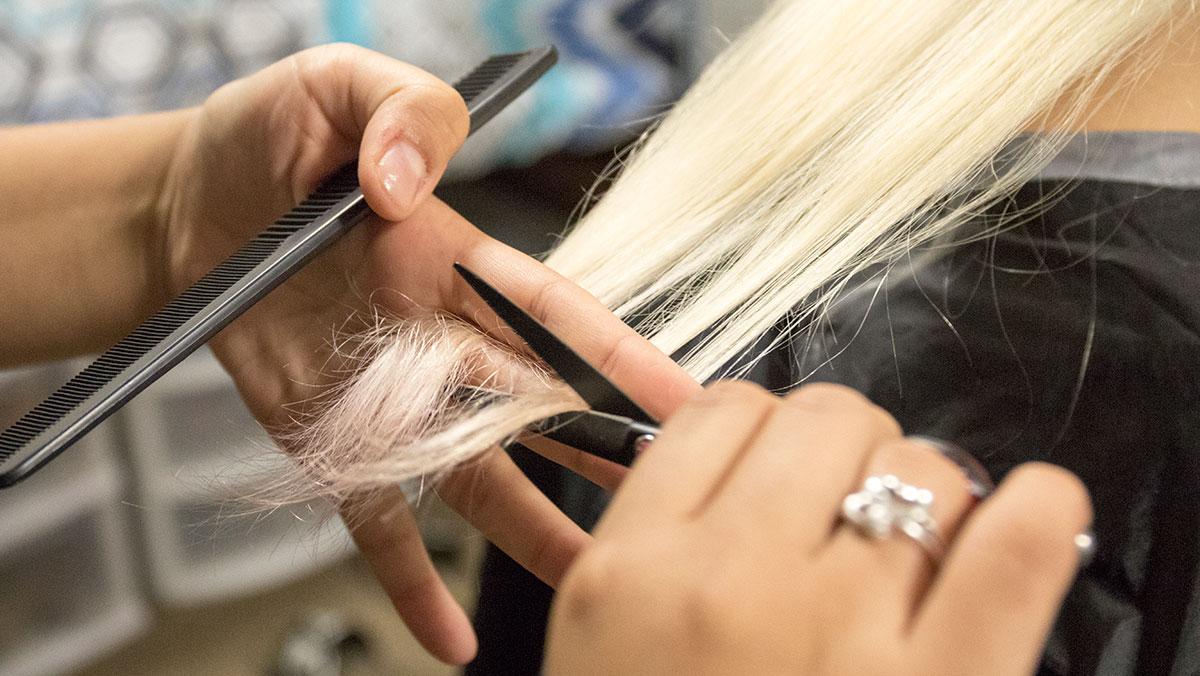 In the corner of a dorm room, a sleek, black salon chair sits in front of an Ithaca College desk. Certifications are displayed openly on the shelves alongside a full-length mirror. Three full drawers under the bed serve as storage for equipment.

Many college students use their residence hall rooms to sleep, study and relax with friends. However, for Kelly*, a freshman, her room doubles as a business, where she uses her experience as a cosmetologist to run an informal, affordable beauty salon for students.

“We’re all college students,” Kelly said. “It’s hard when you’re leaving home to find someone you trust. I’m trying to get people to find somewhere that’s, like, not so expensive. I’m trying to make it easier for girls and guys that need a quick cut in between class[es].”

Kelly completed 1,200 hours of training over a two-year period to earn her cosmetology certification in New Jersey. She is certified in hair, skin and nails, as shown on the certificates on her desk. Before coming to the college, she posted on Facebook to tell students she is open for business.

She said her business has seen tremendous growth in its first month on campus.

“So far, I would say I have 25 solid people that would come and get waxed or whatever,” Kelly said. “When I first got here, I had maybe two girls, even though my Facebook post had almost 200 likes … which was way more than I expected.”

Kelly uses competitive pricing to grow her clientele, but making money isn’t her only driving force. She stresses the importance of customer satisfaction and fair pricing.

“I think it’s a total rip-off how people get charged,” Kelly said. “My roommate went to get waxed in town, and it was almost $40 for just her eyebrows and lip. I just feel like everyone here, at least your freshman year, should save your money and still get what you need done.”

Ally Ruggieri, a freshman on campus, found Kelly online and made an appointment. She said she wanted to get her hair colored and thought she would try getting it done on campus. After her appointment, Ruggieri said she left pleased with the outcome.

“It was fun,” Ruggieri said. “It was laid back, and she was really nice. She really knew what she was doing and, honestly, she charges way less than a professional salon for the same results.”

For waxes, Kelly typically charges $8 for eyebrows, $5 for chin or lip, $40 for legs, $15 for armpits and $20 for arms. Women’s haircuts are usually $25–$30, and men’s trims are $15 and $5 for a beard touch-up. Comparably, Changes Cutting Studio at 120 N Aurora St. charges $50 for a haircut, and patrons who miss their haircut appointments are still charged the full price for services. Even Cost Cutters, a more budget-friendly haircare option, charges $10 for an eyebrow wax and $10 for a lip wax.

Kelly recognizes that running a business from her dorm room violates Section No. 6 of the Solicitation Guidelines of the Ithaca College Policy Manual, which prohibits students from selling goods or services in residence hall rooms, but believes that, as long as her academics don’t suffer from the work, she shouldn’t have to stop using her vocational skills.

“I like not having an on-the-books job right now,” Kelly said. “It’s working around my own time. I think, as long as you set enough time apart so you can study and then make your business kind of second, it’ll be OK. Don’t let the money go to your head.”

Michael Leary, assistant director of the Office of Judicial Affairs, said the consequences vary for student-run businesses on campus. He said he thinks the punishments for running a business should be issued on a case-by-case basis because all businesses are different. However, since dorm rooms are considered private property, the students will be asked to stop running their businesses.

“It’s really rare that a case like that comes to our office,” Leary said. “It’s against the policy to run a business from your room, but it depends on the business and how long it’s been running.”

In the last 10 years, only five cases have come across Leary’s desk. If Judicial Affairs knows of a student running a business from his or her dorm room, there will always be an investigation into the situation.

“I don’t know how people are advertising nowadays, but I’m sure they are and the college just doesn’t look at it or is unaware,” Leary said. “Anything we hear about will be investigated, and we will meet with the student entrepreneur to try and figure out what, exactly, is going on.”

Freshman Brianna Rose also had her hair dyed and styled by Kelly. Rose wanted to try a new look and decided to make an appointment with Kelly.

“My favorite part was that it was local, and knowing that the person doing my hair was on campus and that I didn’t have to go out on The Commons to try and find some place to do it,” Rose said.

Rose said she believes that college entrepreneurs should be able to run their businesses on campus.

“I feel like it’s their right,” Rose said. “I feel like they should do it if they want to and if it makes them happy. Kelly had an informal environment, but it had a very professional feel to it. She would explain what was going on, exactly like how it would be if I actually went somewhere to get my hair done.”

With the business success of her first month on campus, Kelly said she does not plan to stop her cosmetology business. Customer satisfaction will remain her priority and, as long as she can balance her business with school, she said she hopes to continue making money this way.

“I will try to leave you as happy as possible,” Kelly said. “I won’t let you leave my chair unhappy.”
*Name has been changed for anonymity.